The US Department of Justice approved a sale of unused wireless spectrum to Verizon today, marking one of the largest spectrum sales to a single corporate entity in history. The unused portion of the AWS spectrum is owned by a number of cable companies (known collectively as "SpectrumCo") that bought it during the FCC AWS auction back in 2008.

Of course, back in the old spectrum heydays of, uh, four very long years ago, those megahertz were a lot cheaper. In fact, $1.3 billion cheaper. The cable company axis of evil consortium purchased the AWS blocks for a comparatively paltry $2.3 billion at the time. Pocket change! Here's a map of what they bought: 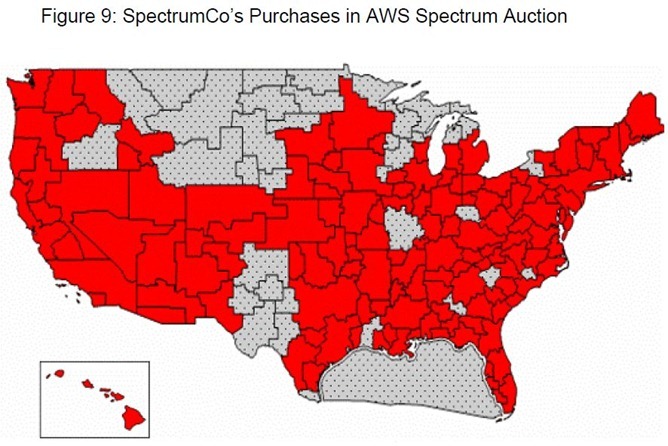 While big cable's intentions with the spectrum when it made the purchase weren't clear (after all, who questions TV providers buying wireless airspace?), the sale obviously netted them a rather convenient and tidy profit. Not only that, but those cable companies are getting a big deal-sweetener in the form of Verizon offering access to its wireless network at wholesale price. Yes, that means your cable company can start selling you wireless service (probably for connected devices) as part of your Triple Play Choice Select 500 Platinum (TM) bundletastrophe. Oh, joy of joys.

In exchange for getting over anti-trust hurdles, though, Verizon and SpectrumCo agreed to a few limitations in regards to their proposed cross-service agreements. One part of that agreement makes Verizon the exclusive wireless service provider to these cable companies. That means they can't buy wireless service from other carriers like AT&T or T-Mobile. The DoJ saw fit to have this part of the agreement extend "only" until 2016. And that's probably just enough time for Verizon's network to become so expansive that it'd be the only practical option for such a cross-service arrangement.

Other limitations basically prevent Verizon from sandbagging its own FiOS cable and wired internet services in markets that SpectrumCo members dominate, in order to promote competition. Don't worry, it starts sounding even more devious the further you dig.

Most outlets have described the other big contingent part of this spectrum sale as an agreement for Verizon to sell T-Mobile some of its unused spectrum. That isn't strictly true, though. Actually, it's much more a spectrum trade (relatively little money will change hands - there's a great explanation of it here).

Verizon will be handing over a bunch of various snippets of spectrum in numerous regions that will serve to "harmonize" T-Mobile's network, allowing it to operate more smoothly and efficiently on some of the various frequencies it uses. Essentially, this will expand T-Mobile's capacity and increase the consistency of service. Verizon is getting off cheap, here - the AWS spectrum it's giving T-Mobile is basically incompatible with its existing network architecture.

T-Mobile is also giving Verizon bits and pieces from its own spectrum bank, that similarly fill holes in Verizon's AWS network. If you take a look here, you'll see Verizon's current AWS coverage is pretty limited to the eastern US. The spectrum it's getting from T-Mobile is almost exclusively in the western half of the country.

T-Mobile, though, is definitely getting something of major value here. Its AWS network is a jumbled mess, and this swap will allow T-Mobile to move on with its LTE rollout more quickly and cheaply, by reducing the need for spectrum "refarming" (re-allocating already-used spectrum for new network technology). Instead, it will be able to do a lot more building on top of its existing AWS network.

Verizon's network will also be harmonized by the deal, as the AWS spectrum T-Mobile is providing fits in neatly with the spectrum Verizon is buying from SpectrumCo, as well as some it already owns. All coming together now, right?

Verizon already controls a very substantial block of the 700MHz wireless spectrum, which it uses for LTE. They also have what is inarguably the US's best 4G network when evaluated on a national scale. That network covers more people by far than any other, and if you were to do an average speed comparison over 100 random points on a map, it'd almost certainly come out as the fastest, too. 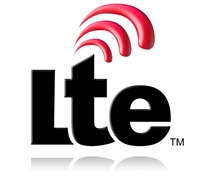 AT&T is playing catch-up, but to say T-Mobile or Sprint have a snowball's chance in hell of ever competing with Verizon's data network on a national level is lunacy. It's just not going to happen without major policy changes and freeing of additional, cheaper spectrum.

Today's deal takes Verizon's advantage and essentially doubles it. The AWS "paired block" (a paired block means less interference between towers and handsets) it has received as part of the SpectrumCo sale is totally unoccupied, unused airspace for Verizon to deploy its network on. While AT&T and friends are forced to refarm, Verizon can start from a clean slate. This makes deploying a network cheaper and faster, and also generally means a better quality of service across the board.

Exactly what Verizon will use this AWS spectrum for is up in the air at the moment. Could it be the groundwork for an LTE Advanced network (ugh, please don't call it 5G)? Or is Verizon just playing hoarder and taking the spectrum ball away from everyone else on the carrier playground?

I suspect Verizon has big plans for this new spectrum. Its collusion with the Cable Cartel agreement with SpectrumCo members suggests that Verizon intends to become the go-to source of wholesale wireless service in the US. That's a massive potential market, and if Verizon continues aggressively expanding its data network footprint (as it has since, well, ever), there's little chance even AT&T will be able to provide it competition in this area.

While Verizon's continued aggregation of wireless airspace probably means ever faster, more complete coverage for customers, it also highlights a growing problem with the wireless industry in the US: a decided lack of competition. Until the US government begins freeing up more of its often very inefficiently or non-utilized spectrum, this problem is only going to get worse. Companies like Sprint and T-Mobile will simply fall further and further behind.

I'm all for competition in the market, but spectrum is to wireless service what irrigated waterways are to farming: necessary for growth, and finite. If someone's hoarding all the water, and the government is slow to turn the spigot, it's difficult to see how competition can spring up.

Whether or not that's a good or a bad thing for consumers in the end, well, I'll leave that for you to decide.