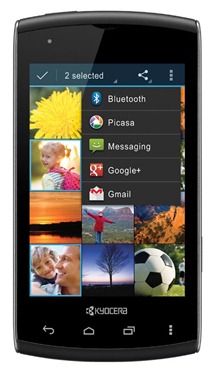 Alternatively, if you'd like to get it without a contract, it will be available from Virgin Mobile beginning August 31st for $99.99. In case you've forgotten, here are the specs:

The Rise is certainly nothing impressive, Android 4.0 aside. Then again, maybe if it can summon the courage within itself to face its fears, embracing its own mortality and using that to fuel its drive to overcome the challenges in front of it, then the Rise can escape the pit that both physically and metaphorically embodies the despair that the lost and forgotten smartphones like it are trapped in. Or it won't sell all that well. One of the two.

Equipped with Android 4.0 operating system, Ice Cream Sandwich, Kyocera Rise will be available in all Sprint retail channels, including Web Sales (www.sprint.com) and Telesales (1-800-SPRINT1) beginning Sunday, Aug. 19, for $19.99 after a $50 mail-in-rebate with a new line of service or eligible upgrade and two-year service agreement. It will be available without a contract at www.virginmobileusa.combeginning Friday, Aug. 31, for $99.99. (Pricing excludes taxes.)

“Kyocera Rise brings customers the comfort of an easy-to-use Android smartphone with a QWERTY keyboard,” said David Owens, vice president-Product Development, Sprint. "It is a great option for customers who are new to smartphones, parents looking for the perfect first device for their teens and tweens or anyone looking for a device with an impressive set of features at a great price. This is a perfect addition to round out our Android portfolio.”

A survey by industry analyst firm Yankee Group earlier this year revealed that 69 percent of consumers called a QWERTY keypad a “must have” or “nice to have” feature on their mobile devices. Kyocera Rise combines that feature with a 3.5-inch IPS LCD touchscreen display for easy navigation, Web browsing and stunning displays of pictures and video.

“There’s a significant population of underserved consumers out there for whom a touchscreen simply isn’t enough,” said Eric Anderson, senior vice president and general manager-Global Sales and Marketing, Kyocera Communications Inc. “For these people, keys are a vital feature. Along with smartphone users who love their keys, approximately half of mobile users still have feature phones with keypads, so they’re comfortable using keys. Kyocera Rise has all the features you’d want in a smartphone in an attractive and affordable 3G device that will appeal to those underserved consumers.”

Kyocera Rise customers can enjoy an unlimited data experience with Sprint Everything Data plans. Sprint’s Everything Data plan with Any Mobile, AnytimeSM includes unlimited Web, texting and calling to and from any mobile in America while on the Sprint Network, starting at just $79.99 per month for smartphones – a savings of $20 per month versus Verizon’s comparable plan with unlimited talk, text and 2GB Web (excludes taxes and surcharges).

Consumers looking for a commitment-free option can pair the Kyocera Rise with Virgin Mobile’s Beyond Talk unlimited data and messaging plans that start at $35 per month for 300 minutes of voice and include unlimited messaging and data. For those looking for a bit more talk time, the $45 plan offers 1,200 minutes of voice and the $55 plan offers unlimited voice each month. All plans include unlimited messaging and data (plans include 2.5GB of full-speed data).1

In addition, Sprint is deploying Network Vision – an all-new network from Sprint that offers enhanced 3G service – with a stronger wireless signal, faster download speeds, expanded coverage and better in-building performance – and 4G LTE, with faster data applications. Sprint rolled out 4G LTE to millions of people in 15 cities on July 15 and plans to introduce more markets to the network in 2012. By the end of 2013, Sprint expects to have largely completed the build out of its all-new 4G LTE nationwide network – with an enhanced 3G network – covering 250 million people across the United States. For the most up-to-date details on Sprint’s 4G LTE portfolio and rollout, please visit www.sprint.com/4GLTE.

Verizon Bringing LTE To 34 New Markets On August 16th, Expanding In 38 Others