I remember the first time I really heard about Flash for Android. Well, maybe not heard about it. The first time I got sort of excited about it. It was in San Francisco, at a trendy Spanish-restaurant-meets-brewery back in the summer of 2010. The taps were pouring freely (and by that, I mean free of charge), tasty little hors d'oeuvres came at us from from all directions, and everyone was having a good, if typically nerdy-awkward, time. The free booze definitely helped. It was also, coincidentally, the first time I met the man in charge of Android Police, Artem, and one of our long-standing editors, Aaron Gingrich.

Most of the small talk going on was about Flash. That's because Adobe had invited out members of the media to this little soiree from all corners of the country for a 3-day Flashapalooza. Unfortunately (fortunately?), I was only able to attend this initial evening icebreaker, as I was simultaneously engaged in the process of dragging a big, old Audi stuffed to the brim with my worldly possessions almost 400 miles down to Los Angeles the next day. There was apparently much debauchery (allegedly) that I missed the second night, though I can't say "Flash developer get-together" is exactly synonymous with "rager" in my mind. I take Artem and Aaron at their word on that one.

Anyway, because of that, Flash for Android will always be something of a memorable topic for me. I can't say I really remember what we talked about that evening, but talk we did. Something about using Flash for multiplayer games and other... stuff. I tried to act excited, to look interested in what the numerous Adobe people who were, um, guiding the conversation had to say. In the end, though, clearly nothing they showed us made that much of a lasting impression.

To put it bluntly, I was far more intrigued by the top-shelf open bar selection than I was by Adobe's Flashpirations.

I don't want to be that "I told you so" guy when it comes to Flash for Android. We've all known it's dying for some time. Really, this "eulogy" could have been written months ago. But with the announcement by Adobe that Flash for Android will be unceremoniously pulled down from the Play Store tomorrow (one day before 2 years to the day that it first showed up on the Android Market), now seems as good a time as any to look back on this failed experiment. But why did Flash for Android die? And why is Adobe so keen on erasing its memory that it is taking the drastic measure of actually removing it from the Play Store? That's a longer story, I think. 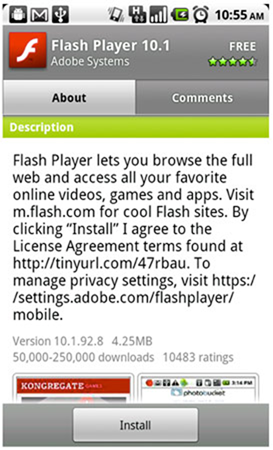 Flash for Android was first teased back in April of 2010, when Adobe announced sign-ups for a Flash for Android beta, having been given the cold shoulder by Apple on the idea of Flash for iOS. It was captured running on reference hardware a month later.

From then on, the plugin's launch was delayed - Adobe had initially anticipated a May beta launch, but later pushed that back to the second half of the year. By June, though, leaked builds started popping up. Then, on August 16th, Adobe made Flash 10.1 available for Nexus Ones running Android 2.2. I vaguely remember being excited as a Nexus One owner at the time, and of course downloaded it with all the fervor of a 10-year-old tearing into the packaging of a new action figure.

A week later, like that 10-year-old, I forgot about Flash for Android. I got bored. When I did want to use it, it was terribly slow, laggy, and generally annoying on a touch interface. I've never really been a big Flash advocate in the first place, and the following two years of living with it on Android didn't change that.

But what happened in that 2-year period? Frankly, not much. None of Adobe's attempts to get developers on Android to latch onto Flash as a mobile development platform worked. I'm not a programmer, so I won't attempt to speak authoritatively on this, but it's hard to see why Adobe thought it would attract those developers in the first place. I've heard programmer friends of mine rail against Java for its idiosyncrasies and general messiness, but I don't think I've ever heard anyone really sing the praises of Flash. I suppose Adobe's philosophy was "write once, run everywhere" with Flash, but the problem is that it ran everywhere kinda really crappy.

Updates didn't seem to fix it, either. In March of 2011, Adobe finally released Flash 10.2 for Android, to the excitement of many - it took advantage of multicore processors and included GPU rendering to speed things up. It was an improvement, but again, as I recall, a marginal one in terms of end-user experience. Those god-awful form restaurant websites done entirely in Flash ran a little less poorly, the buttons were still hard to press, and I still hated every minute of dealing with Flash on my phone. By the time Flash 11 rolled around in December, people kind of just stopped caring.

And that's really all Flash for Android ever was: a mediocre way of dealing with annoying websites written with a crappy plugin that ran poorly. Don't get me wrong, this isn't going to devolve into a Flash hate-fest, but be honest, has anyone ever been really, truly happy to encounter Flash content on their phone? I know I haven't. Running into a Flash website is like walking outside one morning to find your driveway is snowed in, but "luckily," you have a snow shovel (Flash for Android) to dig it out. Oh joy of joys.

A well-designed mobile website trumps Flash in every way that matters on a phone, and anyone saying otherwise is probably in the restaurant web design business. Flash on mobile was a mess, and Adobe did well to put it out of its misery. But why the scorched-earth policy? Why is Adobe removing Flash from the Play Store completely, instead of keeping legacy support for pre-4.1 devices?

As I said previously, we've known for a while Flash for Android is dead. Adobe's just getting around to burying the body in an undisclosed location tomorrow, never to be seen again. Adobe wants people to forget Flash for Android, in its current incarnation, ever happened.

But it's not just Android. Adobe is ending distribution of Flash for Linux builds completely this year (it will, instead, be included with Chrome). Microsoft has forced Adobe to concede to "limited" Flash support in Windows 8's Internet Explorer 10 - the software giant having sworn off weighty add-ons in its latest browser.  In addition, ARM versions of Windows will never see Flash support. As we all know quite well, Apple has never been shy about making its feelings on Adobe's plugin known. Even Google sees an increasingly Flash-less web, as it pushes Chrome's native client, trying to usurp proprietary web plugins and popularize an open standard.

It's not just Flash for Android that's dying - it's Flash in general. Removing Flash from the Play Store is the beginning of a strategic retreat for Adobe, while it regroups and attempts to reinvent Flash as a useful tool in an increasingly plugin-hostile web.

Adobe intends to give Flash a full reboot next year, codenamed "Flash Next," a platform it hopes will stick around for the next 5-10 years. Adobe's strategy? Focus on improving the DRM video streaming experience, as well as gaming - two areas where Flash has traditionally been strong. Still, it doesn't take a genius to see that such a strategy, by necessity, means a decreased Flash presence on the web. Flash-powered websites really are doomed to fade away (thank god), and Flash presence on mobile is presumably dead for good (though Air will remain).

By reducing platform support for the standard, Adobe has all but assured Flash's death (as we know it). Removing Flash for Android from the Play Store is just ripping off a bandage that will, in the end, result in a better web for everyone.

At one point, Flash for Android did seem like a good idea. The "full web" was long considered, at least on paper, to be one of the feathers in Android's iOS-taunting cap. Sometimes having Flash was a legitimate convenience on a mobile device, even if the experience wasn't outstanding. But we've come so far since then. The mobile web is evolving at such a rapid pace that Flash has become something of an anachronism in a world where users increasingly demand a tailored mobile experience. Every day, more people across the globe get online for the very first time with a smartphone, and to those people, Flash is a remnant of a world wide web they'll never know.

So, Adobe Flash for Android, it's time, officially, to say goodbye. We hardly knew you, but that's probably for the best.

Shadowrun Online Hits $559k On Kickstarter, Coming to Android, Ouya, And Other Platforms May 2013