Well, well well - it looks like the unicorn black Galaxy S III may be real after all, at least according to MobileFun, a popular UK retailer which just put it up for pre-order for five hundred quid.

We first suspected the black version of Samsung's flagship may be coming after seeing several images of a suspiciously dark-looking device pop up on Facebook. Shortly after, Android Police obtained a shot of an internal Carphone Warehouse system clearly showing the black variant in its inventory.

The MobileFun pre-order page just about seals the deal. I reached out to the company via Twitter and asked whether the page depicted a real product. The confirmation came not a minute later:

Based on almost 900 reviews and a 4.6/5 rating at Review Centre and its past track record, MobileFun does seem to possess credibility (at least its UK arm - the U.S. one not so much), so I'm going to say this rumor is all but officially confirmed - the last thing we need now is for Samsung to chime in.

Update: MobileFun just put up a full blog post announcing the black Galaxy S III and touting being first to announce a price and the release date. Here is what they had to say:

We’re happy to announce that Mobile Fun will be stocking the Samsung Galaxy S III sim free… in black! As far as we know, we’re the first to announce a price and release date for the new phone. 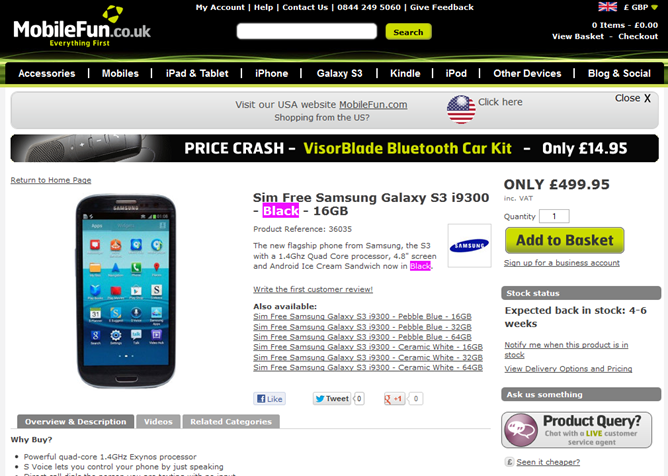