Tablets are good for a lot of things: surfing the web, playing games, watching movies, checking email, and even getting some work done, among others. For many of us, the tablet has largely replaced the smartphone as a go-to device for mobile computing. On occasion, though, it needs a little help to make certain tasks - such as listening to music - a standout experience. For that, there's no shortage of speaker accessories available, many of which are small, portable, and Bluetooth. If you want something with a little more oomph and a little less portability for your Galaxy Tab (10.1/8.9/ 7.0 Plus or Tab 2 10.1/7), then iLuv may have just what the doctor ordered. 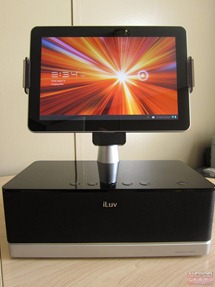 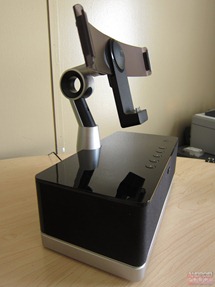 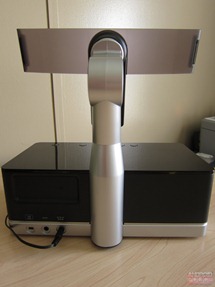 It's called the iLuv ArtStation Pro ($170 retail, ~$140 from Amazon), and it's a big heaping hunk of speaker designed specifically for the Tab series. It's much larger than I expected it to be, but it has the sound to go along with it. I was actually really surprised when I fired it up - this thing can put out some sound. But we'll get to that in a bit.

Aesthetically, the ArtStation just looks like a black and silver box with some sort of arm extending out of it. Along the front of said box is the iLuv logo and a small power indicator light on the top right corner, while both sides are free and clear of anything. Overall, the look is quite clean. The back of the device is where you'll find the power adapter, 3.5" axillary-in jack (for non-Tab devices) a miniUSB "sync" port, and a neat little magnetic area to store the remote control. Along the top of the device, which has a glossy surface contrary to the flat colors on the rest of the unit, are the controls: back, play/pause, forward, volume down, volume up, and power (from left to right). 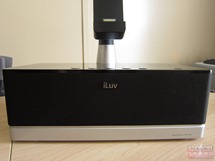 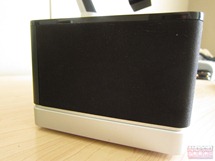 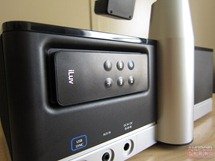 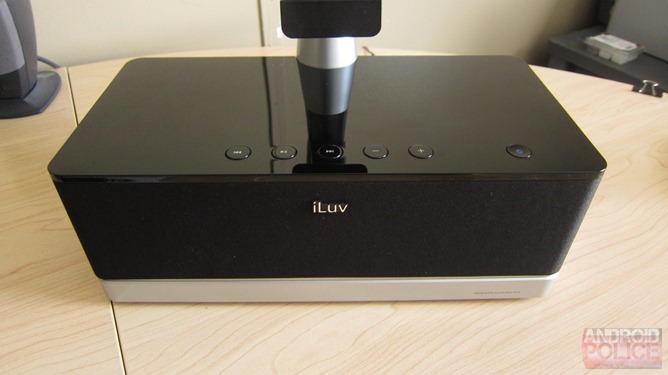 And then there's the "arm" that holds the Tab.

The arm is sort of peculiar in the way it's designed: first off, it looks like it can rotate from side to side, but it can't. Then, there's the mechanism that holds the Tab; that actual "hand" that holds the tablet in place easily slides in and out of the socket - so easily, in fact, it comes off every time the Tab is removed from the dock. No big deal, just a little annoying. Out of the box it's ready to hold the Tab 10.1, but it also ships with extra rubber grips designed for the Tab 8.9 (which are a real pain to switch out, I might add). I read several user reviews about issues with fit when using it with the Tab 8.9, and I can confirm: even with the appropriate grips, the Tab 8.9 can easily be pulled forward and pop out of place. Not only that, but the act of actually inserting the Tab 8.9 into the arm is far more cumbersome than the Tab 10.1. Where the 10.1 slides in quite easily, the 8.9 requires much more attention to prevent the rubber grips from coming out of place. Instead of shipping the unit with extra grips for the Tab 8.9, iLuv would've been much better off to just send a second arm designed for the 8.9. I didn't have a Tab 7.0 Plus (or Tab 2 7.0) to test with the device, but considering they're both primarily used in portrait mode, I can't imagine there are any fit issues whatsoever (because neither of those should require the use of the bracket). 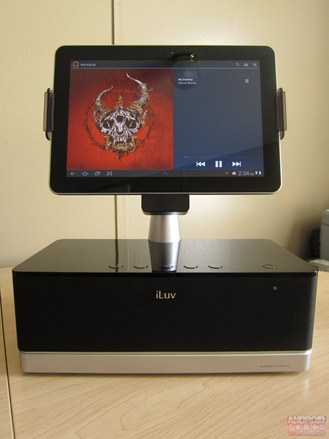 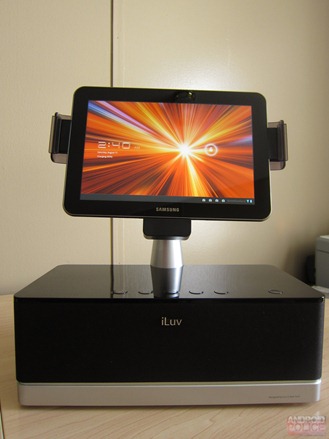 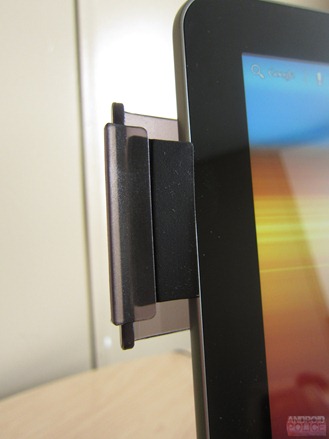 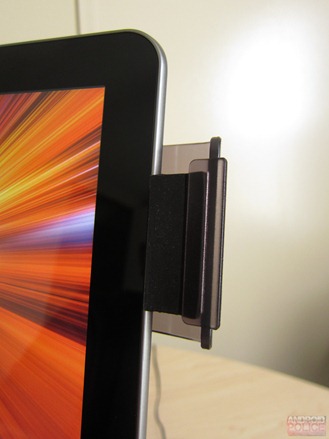 The rubber grips for the Tab 8.9

Serious question: when you're using a tablet in landscape mode but need to switch to portrait, which direction do you most often turn the device? Clockwise? Or counter-clockwise? Here's the reason I ask: the docking area itself rotates so the Tab can be used in either landscape or portrait mode, but it only rotates counter-clockwise. I have never, ever seen anyone rotate a landscape device to the left when switching to portrait. Ergo, this is an extremely unnatural, ridiculous, and downright rage-inducing design; not to mention it puts the power and volume buttons on the Tab 10.1, 8.9, and Tab 2 10.1 in a very awkward position (on the bottom left). Hell, portrait-only apps won't rotate at all and end up displaying upside-down (ex. Spotify). It's beyond frustrating. 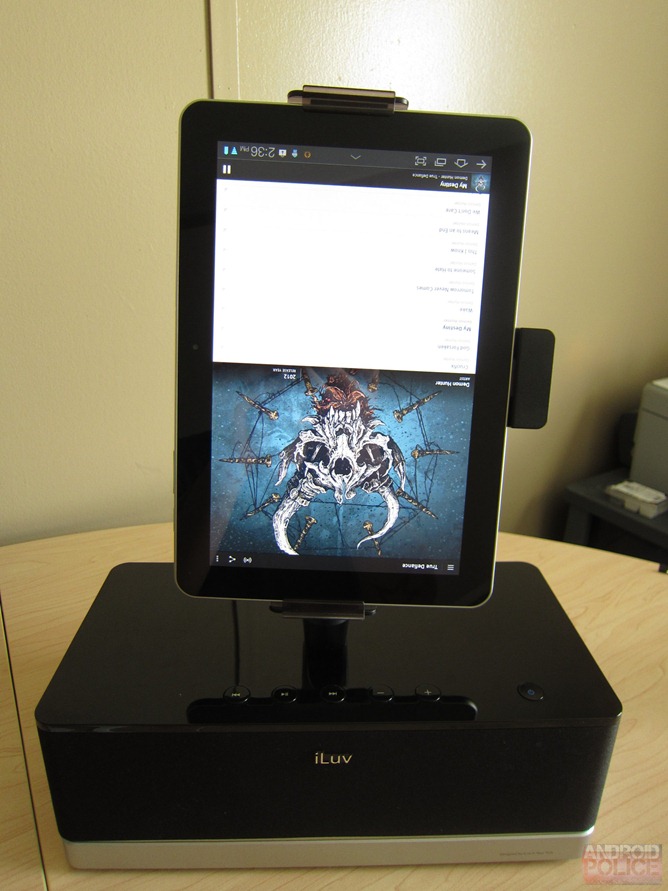 When it comes to build quality, there's sort of a duality going on here: the speaker portion of the device feels solid and well put together. The buttons have a nice sharp click to them, and don't feel flimsy at all. The arm, on the other hand, feels... well, like crap. Basically, it just feels cheap. For example, when adjusting the tilt of the Tab, it feels like the arm could break off at any moment. It's... not good.

On the software side, I have a bit of bad news: the ArtStation doesn't appear to work with custom ROMs. I first tried it with AOKP, but no matter what, the sound refused to come out of the speaker dock. After updating to AOKP Milestone 6, the same thing happened. So I tried CM9 - guess what? Nothing. Thus, I can only conclude that this only works with stock firmware. Let's cross our fingers and hope that the Ice Cream Sandwich update doesn't break it (whenever that actually starts rolling out).

Back on the bright side again, the ArtStation has a remote control. It's pretty basic in function, but it does allow you to control the volume, as well as play/pause, and navigate tracks without having to get up off the couch. That's always a plus. 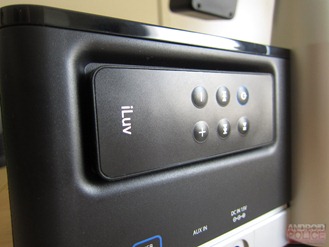 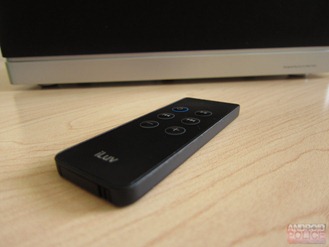 OK, OK - enough with the design and function already. It's time to talk about sound.

As I mentioned earlier, the iLuv ArtStation Pro can definitely put out some sound - enough to easily fill a large room and then some. It's not just sound though; it's good sound. And that makes a big difference. While that may be the case, another common complaint I noticed throughout the user reviews I read was that the unit doesn't have an EQ. That's a no-brainer fix: simply install one of the many EQ apps from the Play Store onto the tablet and set it up that way. I'm seriously baffled that anyone would expect this to have an on-board EQ, anyway; it's a software-driven solution, so there's no reason to think it should have a hardware EQ of any kind in the first place.

Even without an EQ, highs are bright and crisp, just as they should be. Mids, however, are a bit muffled and flat. Again, an EQ can fix that up and make everything right with world; ergo, I attribute the flatness to the tablet, not the dock. However, one area where the ArtStation Pro is lacking -  regardless of EQ settings - is in the low department. That's not to say it has doesn't have any low-end at all, just that I would like for there to be more. While the bass can be bumped ever so slightly with the help of an aforementioned EQ, bump it too much and it just becomes distorted and sounds like audible mud. And no one likes mud in their ears (so far as I know, anyway). Basically, if you listen to hip-hop/rap, dance, techno, dubstep, or any other genre that uses bass as a core feature of the music, this is probably not the speaker for you. For other genres, however, I found the amount of low-end to be quite sufficient.

Overall, the iLuv ArtStation Pro is a decent speaker. It's loud and has pretty decent sound (depending on the type of music you listen to, of course).  Unfortunately, it has quite a few downsides, too: questionable build quality, unintuitive design, and it doesn't work with custom ROMs (honestly, that's probably one of the biggest deal breakers). So, let's break it down, plain and simple:

Who would benefit from this dock: Someone with a Tab 10.1/8.9/7.0 Plus or Tab 2 10.1/7 who never plans on installing custom firmware and doesn't listen to music with a lot of bass. Sounds like a pretty niche group to me.

Who wouldn't benefit from this dock: Everyone else.

If you happen to have an extra compatible Tab lying around, however, this dock may be a good solution for you. Otherwise, it's difficult to recommend a $170 product with this many shortcomings.