If you happen to be in the market for a new phone on Sprint in the near future, you might want to hold off for a couple days. TechnoBuffalo reports that the Now Network is getting ready to launch a promotion on August 12th—and continuing until September 30th—that will offer customers a free ZTE Optik tablet when they purchase any new smartphone. Yes, any new smartphone. Including the free Galaxy Nexus for new users ($99 for upgrading customers). 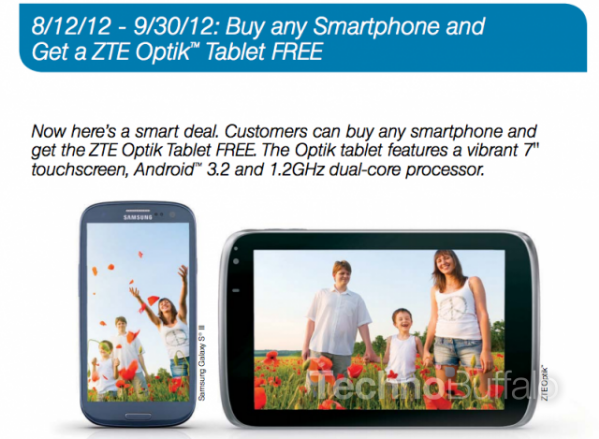 Of course, the ZTE Optik isn't exactly making headlines in the tablet world, though Liam thought it was decent for the price even when it wasn't free. The device doesn't have horrible specs. It packs a 1280x800 7" display, a 1.2Ghz dual-core processor (Qualcomm MSM8660), and 1GB of RAM. Very unfortunately, though, it still runs Android 3.2. On a device this far outside the mainstream, we wouldn't count on it getting an upgrade either.

Still, if you don't have a 7" tablet and wanted to try one out, and you were already planning on buying a Sprint smartphone, it's hard to beat free. It's unclear if Sprint will want you to sign up for a data plan on the Optik, though. The device is capable of 3G connectivity, but hopefully Sprint will do the right thing here and not try to corral customers into yet another device contract. If Hesse and his crew were gonna try that, one would at least hope they'd use a better tablet to do it.

Is A Black Version Of The Galaxy S III On The Way? This Leak From Carphone Warehouse Points To ...

[Whoa!] Google Will Start Down-Ranking Search Results That Receive Too Many Takedown Requests