We've been talking about Chameleon Launcher for a few months now, and despite getting off to a bit of a rocky start, the beta is now officially available for some testers and Kickstarter backers. I've spent the last several days playing with the launcher on a couple different tablets, and, despite the fact that it's still in beta, have been generally impressed.

For the unaware, Chameleon is a new type of launcher designed specifically for Android 3.0+ tablets. It takes a different approach than "traditional" launchers by turning the homescreens into size-adjustable, seamless hubs of information. For the time being, it only offers a handful of different "widgets," including GMail, weather, Twitter, Instagram, and news (RSS). The Chameleon team purposely limited the amount of available widgets in the initial release, as the entire goal of this first beta is to work out the basic kinks before introducing new features. Read: don't worry, more widgets are coming.

When Chameleon is first launched, you're greeted by a completely blank homescreen with a customizable scrolling dock at the bottom, context editor (more on that in a bit) on the bottom-left, and app tray on the bottom-right. A long-press on the homescreen brings up the customization menu, which keeps it simple and offers but two options: widgets and wallpaper. 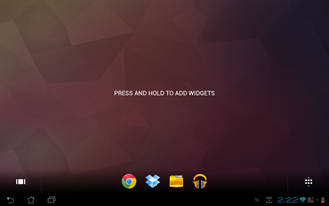 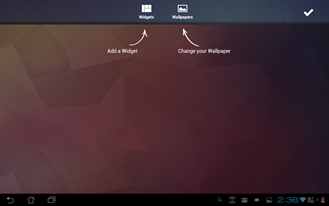 As I've already mentioned, the current iteration of Chameleon only offers five different widget variations. While it doesn't yet cover a wide range of information that most users would want to keep on their homescreen, what it does offer works pretty well. Each widget is resizable on a 4x4 (10" tablets) or 4x2 (7" tablet) grid, and dynamically adjusts to display as much information as possible with the amount of space it's given (for the most part, anyway).

This brings me to the first negative aspect of Chameleon: support for 7" devices seems like nothing more than an afterthought at this point. Here's what I think happened: the Chameleon team spent an awful lot of time optimizing the layout of the launcher for 10" devices, and then the Nexus 7 was announced. They had no choice but to scramble and try to get a working build for smaller devices, and it shows. First off, a 4x2 grid just doesn't offer enough space. With a resolution of 1280x800, there's no reason the N7 (or other 7" tablets with a similar resolution) can't support a 4x4 grid like its larger brethren (which could actually use a larger grid, as well). Ultimately, I would love to see a user-customizable grid. That would be superb.

In the current version, the weather widget doesn't use the layout in an intelligent manner when made full-screen. I'm not sure that anyone would actually want a full-screen weather widget, but for anyone who may, just know that it doesn't make good use of the screen real estate right now (especially in landscape mode). Since most of the other widgets are text-based, they end up scaling fine for the most part. It's worth noting that I almost feel like this is a moot point, given Chameleon's intended use: with clusters of information filling the homescreens, not just single widgets expanded across the screen's entirety. 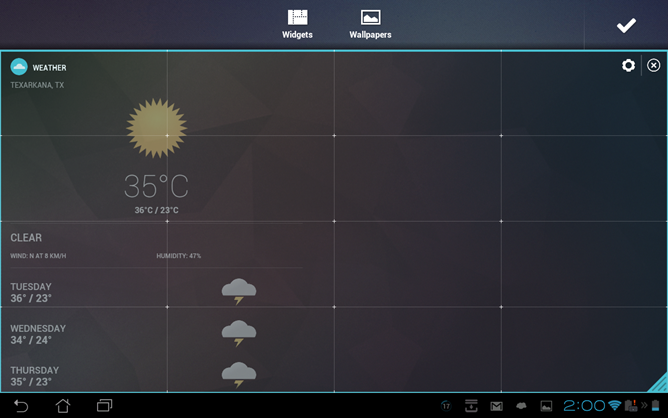 Look at all that unused space!

Chameleon also has this neat feature that will automatically switch up your homescreens depending on certain variables, such as Wi-Fi network, location, and time of day by using the aforementioned context editor. For example, if you want to see your GMail and the weather first thing in the morning, you can have a specific homescreen set up that will display at a certain time. Then, you can use the location variable to have it switch to something else, like news, Twitter, and Instagram when you get to the office (because social networking is always more fun when working). 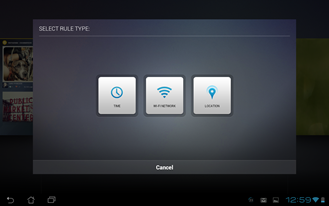 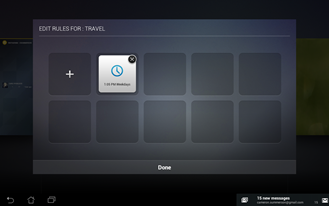 While I realize Chameleon is still in beta, during my time with it I've had numerous ANRs (Android not responding) and FCs (force close). This happened regardless of which tablet I used it on, and after the most recent update on the TF700 (to version .26), it wouldn't load at all. Before the update, however, it was clear that the Chameleon team hasn't yet optimized the launcher for new higher-resolution Android tablets, as the background of the app tray (which is hideous, by the way) was far too small. Again, that's something I feel like is worth a mention but should still be taken with a grain of salt since this is still a very limited beta. I'm sure the Chameleon team is well aware of these sorts of issues and is actively working to fix them before the launcher sheds the beta tag.

Despite all of its current quirks, though, I really like where Chameleon is going. For the time being, I definitely prefer it on 10" tablets, as I just don't find it nearly as practical on the smaller screen because of the nearly-useless 4x2 grid. Also, at this point, I simply prefer the stock launcher on the Nexus 7, as it provides access to basically all the information I could possibly want. With that said, I love using Chameleon as a standalone app, which I find to be a very practical solution when used in conjunction with the stock launcher.

Moving forward, I'm eager to see what new widgets the Chameleon team offers, and I would love to see some sort of integration with existing Android widgets (which is probably unlikely). Even if the latter never materializes, the Chameleon team is eventually going to make an SDK available so third-party developers can create their own widgets designed specifically for the launcher. From what I gather, it's all done in HTML, so the processes should be quite simple. I just hope that developers embrace this feature; otherwise, I'm not sure I could leave the stock launcher behind, and would likely end up using Chameleon as nothing more than a standalone information hub.

AIDE Is Out Of Beta, It's Releasing On Time, Will Charge Small One-Time Fee For Premium Features