HTC's latest flagship – the One X – is a gorgeous device, both inside and out. From its incredible Super IPS LCD2 display to its dual-core processor, the One X is a piece of hardware not to be taken lightly. Those of you who may have been lusting after the One X since its debut earlier this year, but who haven't been able to justify its price tag are in luck – the One X (in both white and gray) has dropped to just $79.99 on both Amazon Wireless and Costco.com when you buy it to upgrade from your existing AT&T-connected handset or opening a new account. 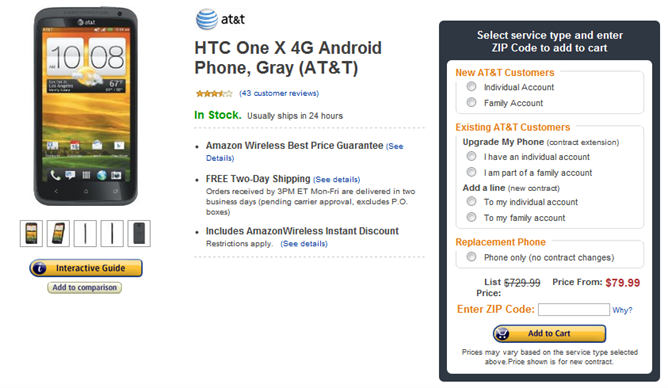 If you've forgotten the specs that make the One X worth looking into, here's a short run-down:

While we've already seen the One X on sale for $99.99 at both RadioShack and AT&T, this deal is undoubtedly better, and worth taking an advantage of if you've been waiting to get your hands on HTC's flagship. Just hit the appropriate link below to take advantage of the discount.