Yesterday, we received an email from a developer of an app for Android called Star Trek ToDo Agenda. He was contacted by Appigo, with the following email (private information redacted):

I'd like to discuss a small issue with one of your apps:
Your App Name: Star Trek ToDo Agenda
Your App URL: https://play.google.com/store/apps/details?id=com.stanlm.startrektodoagenda&feature=search_result#?t=W251bGwsMSwxLDEsImNvbS5zdGFubG0uc3RhcnRyZWt0b2RvYWdlbmRhIl0.

I see that you are using the word "TODO" in your app name, screenshots, and description.  TODO is a registered trademark of Appigo, Inc. (USPTO Reg. No. 3,964,288), which mark we have been using in commerce since July 2008. Your use of the "TODO" trademark is likely to cause customer confusion to our existing and potential customers.

I'm sure that this infringement was not intentional and am hoping that you can quickly release an update of your app that removes any reference of "TODO" and use a more descriptive term.  For example, "to-do list", "task list", "task management", etc. are appropriate substitutes.  As a side note, "to-do" in English is properly spelled with a dash between the "to" and the "do".

I appreciate your help in promptly resolving this to avoid any further name confusion or unnecessary lawyer fees.  :-)

So, having read that email, does it read to you like something a lawyer wrote? Yeah, not really. It was someone with Appigo that actually sent this message to Star Trek ToDo's developer, and while I can understand wanting to keep it "informal" before calling in the lawyers, accusing someone of trademark infringement isn't something you do casually. Even if Appigo has the most honest of intentions (I sincerely doubt that), this definitely qualifies for what, in the legal parlance, would be termed "kind of a dick move."

So, let's dismantle Appigo's claim piece by piece, shall we? Appigo filed for its trademark as "Todo." But it did so as the Spanish word - not as a fanciful respelling of the phrase "to-do." This is from said TM filing:

Translation: The English translation of "TODO" in the mark is "ALL" or "EVERYTHING".

By including that information, Appigo has claimed its mark for the use of the Spanish word "Todo." Because of that, Appigo's registration is likely what we would call an "arbitrary" or, more likely, "suggestive" mark - the Spanish word "Todo" has no inherent descriptive relation to a software program, much like Apples have no inherent relation to computers - that would be arbitrary. Suggestive is probably a better descriptor here, though - Todo stores "all" your task management information in one place (not literally, but you get the idea), so it's an "all in one" sort of app. It takes a few mental steps to get there, and that's exactly what separates a suggestive mark from a descriptive one.

Had Appigo claimed "ToDo," a fanciful respelling of "To-Do," it would almost certainly not have received principle registration for its trademark until it had established sufficient secondary meaning. Why? Because it's probably merely descriptive, if not generic (generic marks are not registerable). Naming a task manager app "ToDo" merely describes the product (even if it is "more than just a to-do list"). In one rather famous case, the trademark "Lektronics" was struck down as generic because it was merely a fanciful respelling of the word "electronics." The company registering it? They sold electronics.

So, if Appigo claimed "ToDo," it might be able to get it in as descriptive if it was later proven secondary meaning was acquired. But that's really, really hard (read: almost impossible) when you're an independent developer claiming a geographic scope of the entire United States. And even then, the trademark examiner probably would still have major misgivings about the mark simply being generic. So what did they do instead? They claimed "Todo" - spelled exactly like ToDo (rather convenient for search results, I might add). What comes up when you Google "to-do app iphone"? 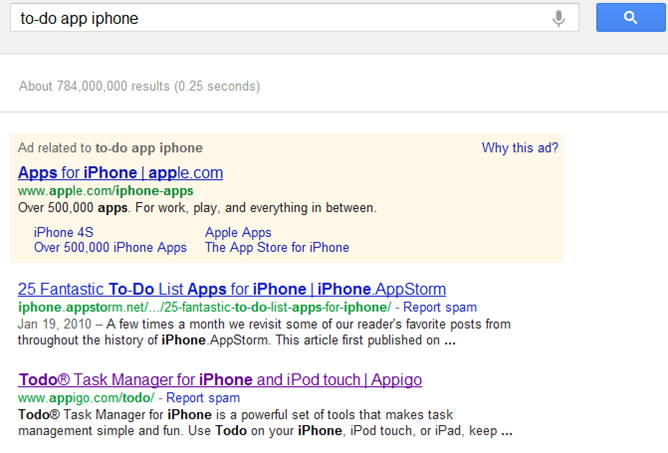 Funny, that. It's almost like they knew they wouldn't be able to get a trademark for "To-Do" or "ToDo," so their clever filing attorney went with "Todo" because it was easier to get in the register as suggestive or arbitrary. In fact, they even use "to-do" on their homepage to describe the app:

It gets better. Head over to Appigo's Media Center page and you find this little gem:

That's there because in order to file for a trademark, you have to show you actually intend to use it in business as described in the filing. If Appigo had simply filed for "Todo" and then started referring to its app under the pronunciation (and yes, pronunciation is relevant to trademark analysis) "To-do," they would not have been using the mark as described in their filing. Appigo is specifically stating that its name is not ToDo, and not pronounced that way.

So, how is it anyone else's fault that you just happened to pick a Spanish word that is spelled exactly like an English word / phrase that describes what your app does very well? Clearly, it isn't. You chose to trademark a foreign word you knew was similar to, if not exactly the same as, an English word you couldn't, and now you're trying to tell people they infringe on your trademark because they're using that word in the way you couldn't register.

Give me a break.

There is a "doctrine of foreign equivalents" that sheds some light on the issue of registration of foreign words as trademarks in the US, but it really confuses the issue more than anything (it's also a widely-hated doctrine). Basically, we look at the translation of "Todo" ("all" or "everything") from the trademark filing, and compare it to the name of the allegedly infringing mark, "ToDo." Under this analysis, there clearly is no likelihood of confusion, even if the marks are in the same sector of business - the words have two very different meanings.

While it would be hard to prove, this all suggests to me that Appigo filed for its tradmark on "Todo" in bad faith. It knew that it would easily be mistaken as a misspelling of "ToDo" and "To-Do," and that's something the examining attorney at the USPTO should have caught (I've read the registration docket, they didn't). But, as with most small trademark filings, no opposition was filed, and a mark that should have never made it onto the principle register ended up there because some attorney got cute with his Spanish.

If you're a developer who has been threatened by Appigo, please, get in touch with an attorney. Even if just to explain to them the situation and see what they have to say - that part's free.

In the meantime, let's hope a little negative attention will shame Appigo into stopping this nonsense.

Agent Dash Is A Secret Agent Themed Running Game, Has No Idea Who This James Bond Character Is