Today, I'm going to help you with this problem. Here's a handy guide to help you not suck so incredibly bad at naming your phones and tablets. To make things easier for you, the really important ones have numbers in front of them. 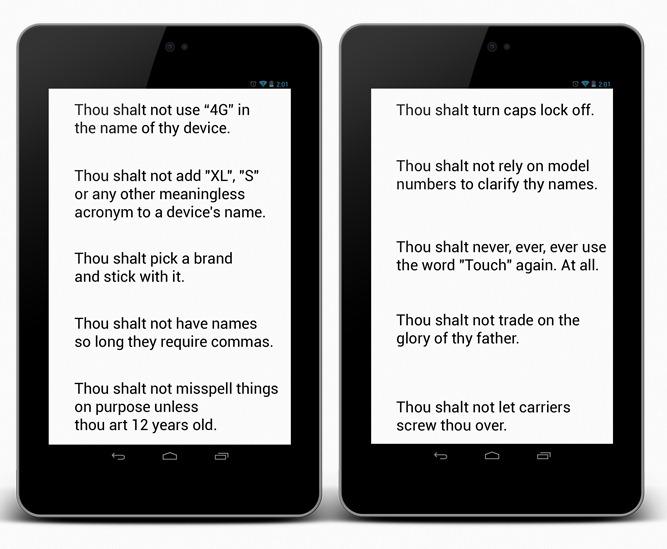 1. Thou shalt not include "4G" in the name of thy device.

I understand you have a need to distinguish your higher-end devices. However, for starters, you have ruined what 4G means. The Evo 4G uses an entirely different 4G tech than the Evo 4G LTE. Moreover, the name of a device is not the place for a spec list. Especially for a spec that will eventually just be standard. You wouldn't call a device the "DROID Cyborg 8MP," would  you? You would? Really? You're fired. Next.

2. Thou shalt not add "XL", "S" or any other meaningless acronyms or suffixes to a device's name.

Your phone is not a t-shirt. Do not refer to it as "XL" because it's slightly bigger. Especially don't call it "XL" if it's not any bigger at all. Do not add an "S" to the end of a name because it's the same as another phone but faster. This goes double for "HD." That acronym died a long time ago. Stop using it.

Special note to HTC and Samsung: "Galaxy S" and the One X/S/V actually kind of work as names, but you should know we have no friggin' idea what those letters mean or stand for. Is the "S" for "Stars"? Which is better, an X or an S? These don't necessarily hurt a brand, and you may carry on with them in this fashion as long as those letters are part of a broader image, but you should know that it just feels weird.

3. Thou shalt pick a brand and stick with it.

The only times this co-branding has worked are the Nexus S and Galaxy Nexus. The Nexus is a strong brand (and a fantastic example of how to properly name a series of devices), and the "S" and "Galaxy" monikers served to distinguish individual models in the line. But see, you've used up both of those, Samsung. Now you need original names if you want to make another Nexus device. This is why you do not mix and match. You just end up making names longer and more confusing. Which leads us to...

4. Thou shalt not have names so long they require commas. 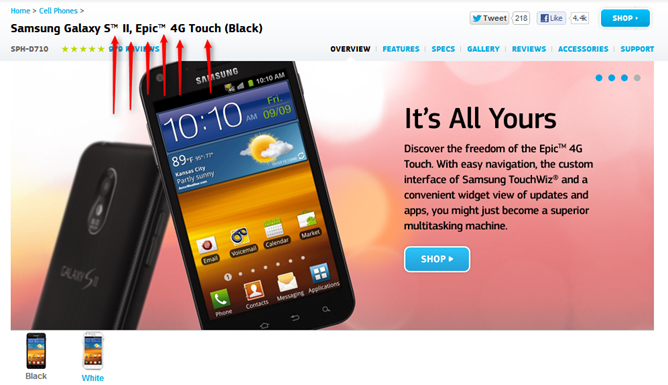 This name has two trademark symbols indicating two separate brands (one of them a carrier brand), a comma, "4G," and "Touch" in the name,  setting the record for most commandments broken by a single device at five.

You should've learned this in your earliest marketing classes. If a name is so long that you need to pause in the middle of it (which is the function of a comma), it is too long. And yes, the full official title of the Epic 4G Touch does have a comma in it. This also counts if you have a ridiculously long name that you attempt to cleverly hide, as is the case with the many of the Transformer series.

5. Thou shalt not misspell things on purpose unless thou art 12 years old.

If you are 12 years old, please tell us how you got a job in the marketing department of an international device manufacturer or wireless carrier (which, frankly, wouldn't surprise us). For everyone else: no, it's not the 90s anymore. It is no longer okay to stuff the letter "X" in where it doesn't belong. And if you absolutely insist on naming a device something dumb like the "Xoom" (or "Xyboard"... ugh), have the decency to make it not suck.

6. Thou shalt turn caps lock off. 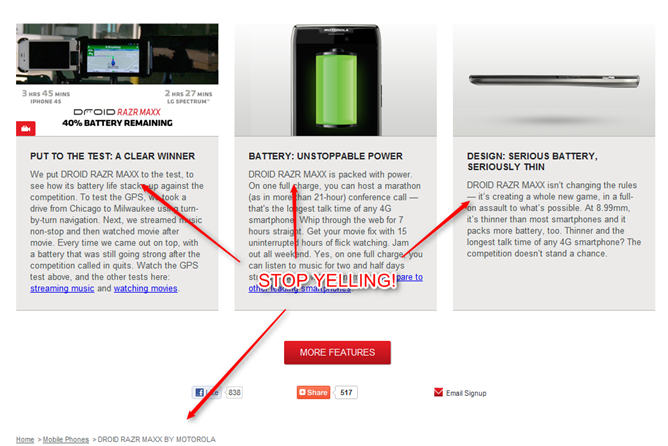 DROID RAZR MAXX is a real thing and is actually how it's officially written in marketing materials and on Motorola's website. In some places, even "Motorola" is capitalized. I shouldn't have to say more about this. It's to the left of the "A" key, people. Just turn it off.

7. Thou shalt not rely on model numbers to clarify thy names.

Model numbers are great to have. However, when your device names have become a seemingly-random grab bag of, let's say, the words "Eee," "Transformer," and "Pad," it becomes easier to just refer to a device by its model number. At this point, your product name has gotten too confusing for customers to even know what device they should be asking for. So, you can forget about having strong brand recognition.

8. Thou shalt never, ever, ever use the word "Touch" again. At all.

Yes. We get it. It has a touchscreen. Any phone that doesn't have a touchscreen should not be considered a smartphone. Furthermore, the word "Touch" is frequently employed to distinguish a device from a similarly-named product that has a physical keyboard. You are now adding words to a name to describe things a phone doesn't have. No. This word is officially retired. Let it go.

9. Thou shalt not trade on the glory of thy father. 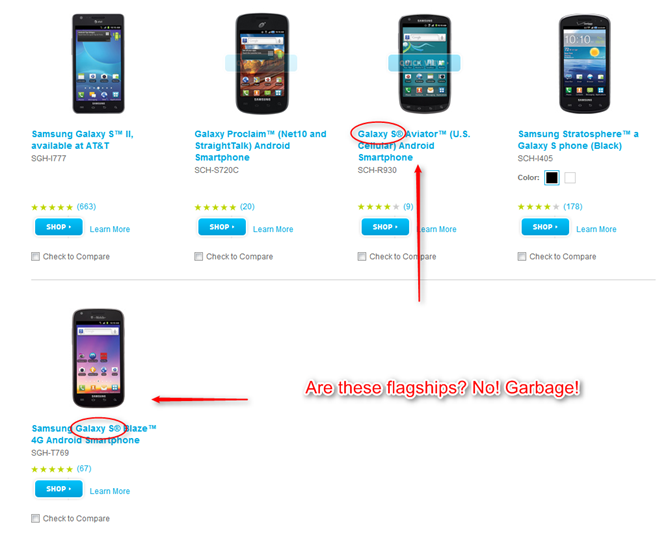 You had a successful device once. That's great. Do not use the name of that device to sell lesser products. Phones like the Galaxy S Advance, the Evo Design, and whichever Optimus phone sucks more than the others are all inferior products. Yet, they share a name with their incredibly successful brethren. Save your brand. Treasure it. If you give that brand to things that don't deserve it, the name becomes meaningless.

10. Thou shalt not let carriers screw thou over.

This is the big one, and, seriously guys, nut up. Yes, carriers need to sell devices. Yes, they need to distinguish themselves. Yes, they're the gatekeeper through which you get to customers (in some markets). However, people have to choose a carrier. They don't have to buy your phone. A person can have cell service without buying a smartphone. You actually need to convince people to buy your products (unless you're satisfied with your dumbphone sales, where applicable).

Unless your name is Pantech or Kyocera, it is not terribly likely that carriers will shut you out of the market if you. Don't let them tack on a bunch of useless crap to your device's name (or the device itself). Ultimately, keep in mind that a carrier's product isn't phones, it's the network. That's what they should be competing on. If a carrier you're dealing with is only able to succeed because they have exclusive rights to your phone—whose brand they've ruined—you're only helping prop up a network that is going to make your customers' experience worse. And they may even end up blaming your product for that.

So, What Should We Do?

I am not without sympathy. Naming things can be tough. Especially when you have to keep doing it over and over, month after month. Here are a few things you can try that can result in better names and brands:

Make up words or modify existing ones.

The Lumia has a great name. Sounds like "luminance." A bright and shining light. It's nice imagery. The original "Evo" was a strong name, too. Derived from the word "evolution," and it was an evolution of the smartphone. It also sounded powerful. Even "Atrix," while a bit odd-sounding, was unique. Distinct. Recognizable. These are traits you should be aspiring towards when building a brand.

Most HTC devices are marked by single-word adjectives or nouns that convey a certain idea. Desire. Inspire. Incredible. These are strong, unique, and convey an identity to consumers. Yes, you'll run out of words eventually, but as long as you're creative, that shouldn't happen too soon. There are a lot of really great words out there. Learn them.

Yes, you have a ton of markets to compete in and many of them have entirely different needs and preferences. There are relatively few markets, however, that need six separate slab phones with mildly different specs. You'll run out of ideas less quickly if you stop throwing away good names on crappy devices.

Just use the same name.

I hate to use the A-word around these parts, but Apple may have the right idea. At least for some of your devices. If a product is high-end and in-demand enough, you don't need distinguishing names. The new iPad is simply "the new iPad." The new iPhone will likely just be called "the new iPhone." In the future, we'll probably start referring to these devices by their year of release, once it becomes necessary. And do you know why Apple can do this? Because it has a strong brand. Almost none of your phones now could pull that off, save maybe the One X and the Galaxy S series. If you build a strong enough brand, you too can take risks like this.

Get It Together, Guys

A name should be clean, simple, and easy to say. This is doing it (mostly) right.

Honestly, each device manufacturer seems to have a piece of the strong branding puzzle. HTC makes hardware to lust after, Samsung has the infrastructure and the clout to push truly global product launches, ASUS is very near the only Android tablet manufacturer that's really innovating right now (though that Galaxy Note is looking good), and Motorola...is owned by Google? In any case, these companies have what it takes to build iconic, even culture-defining devices.

The race to build yet another smartphone iteration, though, has dragged some of the best names through the mud. The original Droid was a herald of things to come. The first Evo laid the groundwork for the powerhouse Android phone. The Nexus 7 has now set the bar for Android tablets. These are all great products, but they also all have great names. And they don't just have them, they deserve them. So, manufacturers? Carriers? Maybe stop screwing up these names so bad that it sounds like a computer spit them out. All you're really doing is making it harder for folks to talk about your devices in everyday conversation. And that's where real brand loyalty is bred.

Samsung Sending Out Invites For August 29th Unpacked Event At IFA 2012 In Berlin, All But ...

Agent Dash Is A Secret Agent Themed Running Game, Has No Idea Who This James Bond Character Is