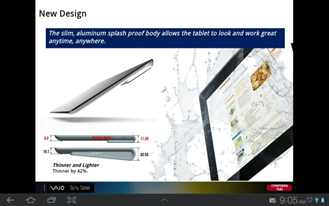 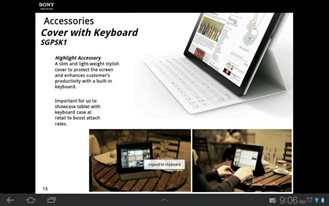 The Xperia Tablet is said to feature NVIDIA's 4-PLUS-1 Tegra 3 processor, along with 1 GB of RAM, an 8MP rear shooter, 1MP front camera, 6,000mAh battery, DLNA support, and "ICS or later;" and will be offered in three ranges of storage: 16GB, 32GB, and 64GB. The device will reportedly have several different accessories at launch, including Microsoft Surface-like keyboard folio ($99),  a few different covers, a docking stand ($99), docking speaker ($119), "simple stand" ($25), and a few others.

The Xperia Tablet also features guest mode, so "each member of the family [can] share one tablet." Interesting concept, right?

Of course, there's no word of when we could actually see this device hit the streets. However, pricing is said to be around $449 for the 16GB model, $549 for the 32GB model, and $649 for 64GBs. Sony may have learned some things from mistakes with the Tablet S, but it looks like pricing wasn't one of them.