When we announced Nexus Q at Google I/O, we gave away devices to attendees for an early preview. The industrial design and hardware were met with great enthusiasm. We also heard initial feedback from users that they want Nexus Q to do even more than it does today. In response, we have decided to postpone the consumer launch of Nexus Q while we work on making it even better.

To thank you for your early interest, we'd like to extend the Nexus Q preview to our pre-order customers and send you a free device. If you had other items in your order, your credit card will be charged for those items only.

Your Nexus Q will be on its way soon and you will receive a notification and tracking number from Google Play when it ships.

The Play Store page for the Q has been removed (unless you have a direct link), and all references to pricing are gone. Which, as you might guess, probably means when it does return, the Q will be a little cheaper ($300 was definitely steep). Pricing for the Triad bookshelf speakers was also removed, as was pricing for speaker cables. 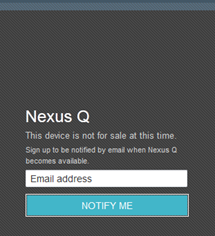 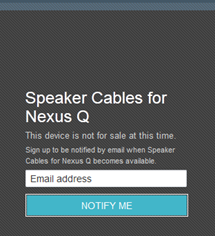 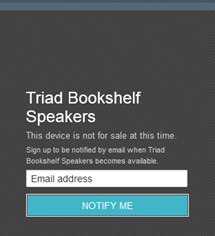 So, expect the Q to return a cheaper, leaner media streaming ball. That hopefully does more. A lot more, preferably.