Multi-user support is one of the few remaining things a desktop OS can do that Android can't. The "coffee table tablet" use case would greatly benefit from a multi-user setup, as would an enterprise user who wants to keep work and home separate. It's been a top 20 item on the Android bug tracker since the debut of Honeycomb, so there is certainly demand for it.

As we've seen from my previous experiments in sticking my nose where it doesn't belong, Google likes to leave breadcrumbs in shipping products for the astute observer to find, and the multi-user situation is no different. After a bit of research, I can tell you that Google is listening. There is a surprising amount of multi-user work being done on Android - some of it is even working on devices right now.

Before we jump into things, we're going to need to learn some vocabulary. "AOSP" is Android Open Source Project, you should know that one. It's the publicly available code base for Android.  A "commit" is a code push to this code repository. You're supposed to include a helpful comment with your commit, telling people what the new code is supposed to accomplish. This is Android code, so the commit comments are written by Googlers. In other words: they're accurate.

Now, on to the evidence: 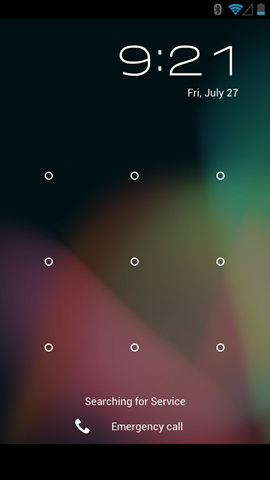 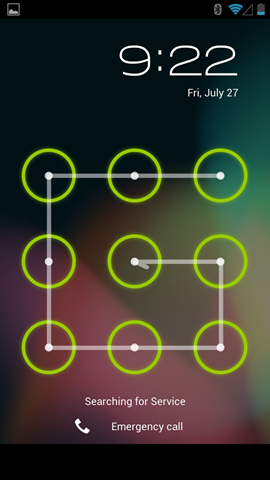 You can't see it, but there is multi user support in there somewhere.

I was originally clued into the idea of multi-user code already existing by Abhisek Devkota, aka "ciwrl," CyanogenMod's Head Moderator. The guys at CM had stumbled upon some interesting sounding methods named "SetCurrentUser" and "onUserChanged." These methods were found in LockPatternKeyguardView.java, a file for Android's pattern unlock. Here's the whole section:

I'm no expert, but this looks pretty straightforward: when the user changes, switch the lock screen over to the new user's lock screen, and redraw the screen so the user can see these changes. It sounds like pattern unlock is listening for a user switch!

There's way more to this than just that one section. Ciwrl also pointed out a few commits to me, and if you start digging through the public AOSP repository, you'll start noticing tons of work related to multi-user functionality. After a bit of work, I've been able to piece together a decent timeline of multi-user upgrades to the AOSP code base.

The Timeline Of Commits

Please note that, just because something is mentioned, doesn't mean it is 100% working, or even working at all. And, just like any big change to Android, the biggest problem is ecosystem support: you have to implement this without breaking everything else. So consider this to be merely a peak at what has been worked on, and nothing more.

Direct quotes of commit comments are in bold, and my attempt at translations are in regular text:

April 14th, 2011 - "Plumbing in PackageManager and installd for multi-user support."

By Amith Yamasani, A Google Engineer

So How Much Of This Actually Works?

Of course, the question arises when reading those comments, how much of this is actually in Android right now? All of those commit dates are pre-Jelly Bean, and some are pre-Ice Cream Sandwich, so some of this stuff must be live, right?

One of the more interesting and new-ish Android files is called "UserManager.java." It references a "userlist.xml" file in /data/system/users, so that sounds like a good place to start. Here it is in Jelly Bean: 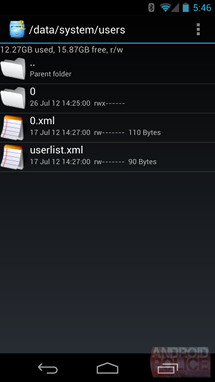 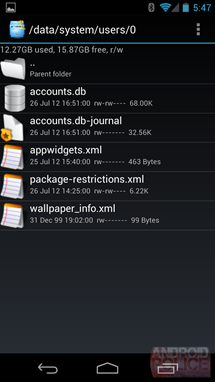 Oh my. You're telling me this works right now?!

That is a live, working, multi-user directory structure. A single-user OS would just store everything under /data/system, but the fact that this is already storing things in a "user" folder is just phenomenal progress. There are settings for app widgets I have on my home screen, apps I have installed and disabled, and my wallpaper settings. It's been right under our noses this whole time: Jelly Bean is a multi-user OS, with only 1 user. I am User 0.

Let's take a closer look at some of these files: 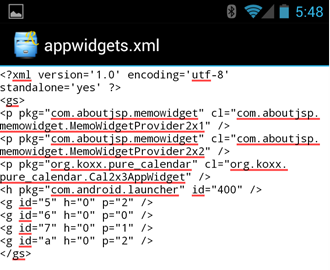 As we can see in the "<users>" section of "userlist.xml," there is only 1 user, User 0. A quick look at users/0/appwidgets.xml confirms that user is me, because those are the widgets on my home screen. It's interesting that app widgets are here, but there's no mention of the actual app shortcuts.

"0.xml" will probably, one day, house things like my name and my profile picture, but for right now, my name is just "Primary." If you recall, we've heard of "Primary" before in the March 28th, 2012 commit: "Passwords and patterns are stored in a new per-user location, except for the primary user, for backward compatibility." Primary is the least exotic and most backwards compatible user.

"Accounts.db" is an SQLite database. It contains the accounts listed under the "Accounts" section of settings, in my case, Google and Dropbox. It also contains the full list of every Google service I've ever used, my preferred language, and my authtokens. So it looks like accounts and syncing is on a per-user basis now, too. 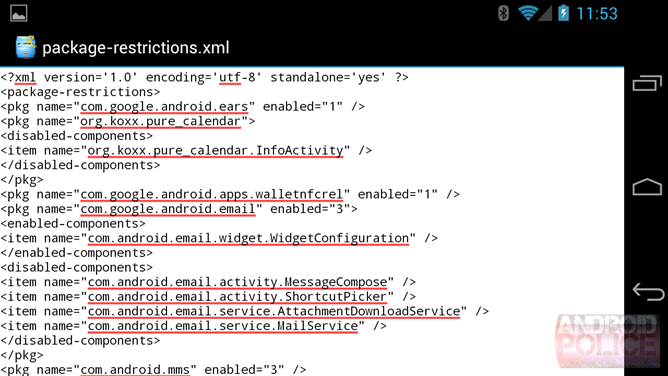 Package-restrictions.xml has a seemly complete list of apps on my phone, and their enabled/disabled status. Toward the middle you can see "com.google.android.email enabled=3" which means I've gone to app info and hit the disabled button for it. So, as we saw in the commits, each user can enable/disable the apps of their choosing.

Wow. The magic of Linux. Thanks to the symlink, the majority of apps are now storing their data in a user directory, instead of dumping them in a global directory. There's almost 100 directories in here. I was concerned about 3rd party app support, but it looks like most app is ready for more users.

And the following things still need to be worked on: Namely, every piece of UI. You need a user switching screen, an entire settings section for managing users, setting permissions, taking or picking user avatars, names, etc. You'll also need a way to know what user is currently logged in. There also doesn't appear to be separate settings for home screen shortcuts, and probably a million other settings. And who knows how 3rd party apps would really deal with a massive change like this. Lots of testing needs to happen.

The first commit was over a year ago, and the last one we know about was 4 months ago. A lot of work has already gone into multiple user account support, but I'm sure there's still a lot more work to be done. Keep plugging away Googlers! I'll be watching...