Way back in November, LG took to Facebook to announce that its high-end handsets would be receiving an upgrade to Ice Cream Sandwich. Of course, that was eight months ago. A lot can change in that time. Now, LG Canada's twitter account is saying that the Optimus 2X will not be upgraded, and that LG's previous comment on the subject was a "general statement issued from HQ." 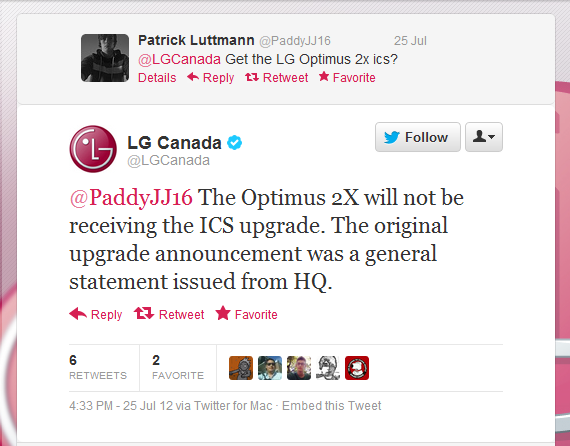 Of course, it's a little hard to understand how "the LG Optimus 2X will receive an upgrade to ICS" could be interpreted as a "general statement". We've reached out to LG for comment and will update as soon as we hear more. Hopefully it is simply a mistake on the part of LG's Twitter account. Unfortunately, in the Android world, it's become imprudent to bet on the update.

Nexus 7 16GB Now In Stock On The Play Store

Going Indie: The Story Of Independent Android Game Development From Concept To Completion