When Samsung inadvertently removed the universal search feature from the international Galaxy S III, everyone assumed it was for legal reasons. Not so, says Samsung! As it turns out, the feature was removed on accident and, as of today, the feature has been restored. If you live in the UK, at least. No word yet on restoration to any other devices. 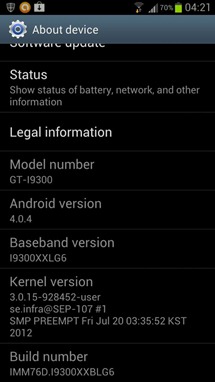 As you can see in the photo above, the device model this is being applied to is t he GT-I9300, which is the model for the international Galaxy S III. We're still waiting to hear if any users outside the UK get the feature restored, but for now, it looks like if you own the device inside Her Majesty's borders, you should be getting local search back before you know it.

Ouya Announces OnLive Support, Shows Off The Latest Revision Of Its Controller, Continues To Be ... PSA: The AT&T HTC One X Will Be Available For $99 Beginning On Sunday, July 29th From RadioShack