A good backpack plays an important role in the life of a geek. It's a catchall and a safe haven for gadgets. While we've looked at a very good traditional backpack once before, today we're going to look at one that is anything but traditional: the Solid Gray backpack.

It doesn't take an eagle-eye to notice that the Solid Gray is quite unlike other backpacks. In fact, the only similarity between the Solid Gray and a traditional backpack is that they both go on your back. Aside from that, this is a whole new beast. 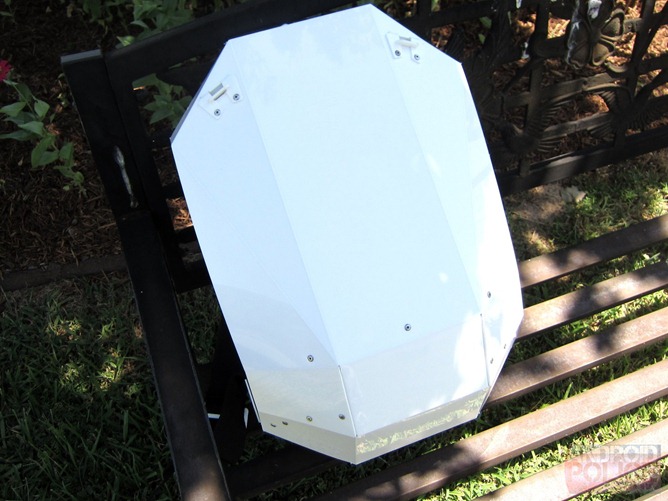 I know what you're thinking: a backpack is a backpack is a backpack, right? Wrong. The Solid Gray backpack isn't your typical run-of-the-mill nylon backpack with zippers and such. It's a hardshell bag designed in The Netherlands and made from one solid piece of a strong, lightweight, and flexible polypropylene. And it's like nothing I've ever seen before. To put it plainly, this is the backpack Batman would carry if it came in black. Or if Batman started wearing white.

When I first removed the Solid Gray from its box, I just stared at it for a while. Sizing it up. Trying to figure out exactly what I was looking at: a solid shell of a bag. No pockets on the front. No padding on the back. Just a shell and nothing more. 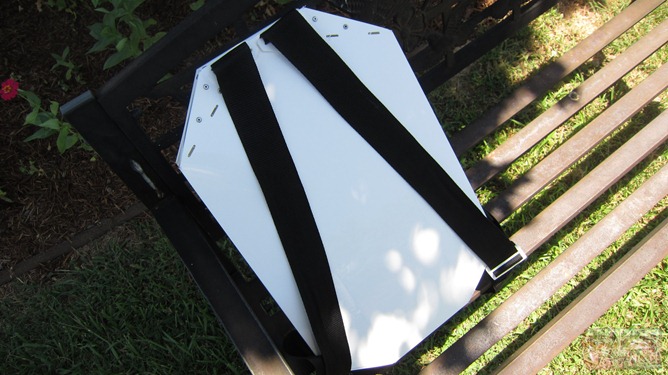 After that, I spent the next few minutes trying to figure out how to open it (the instruction were inside the bag. Doh!). With that out of the way, I "explored" the bag for a while. In fact, I'm still intrigued.

I feel weird calling this a "bag" since it's actually more of a box. Since "backbox" sounds absolutely ridiculous, though, I herein declare it shall be referred to as a bag for the rest of the review.

The bag stays closed with two plastic locking mechanisms on the top corners. They actually do a much better job than I expected at keeping the lid closed, and offer a satisfying snap! once locked in place. When opened, the front panel of the Solid Gray folds down, exposing the inside, which, at first sight, just looks like a huge open area (that holds laptops up to 15.6"). That's not exactly the case, however: there are also two smaller compartments for storing... small things. Things like USB cables, earbuds, etc. are perfect for this area. The main compartment, of course, is for a laptop, tablet, and all other large things. 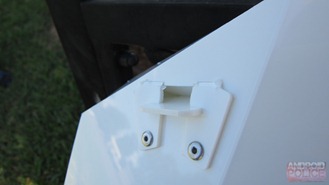 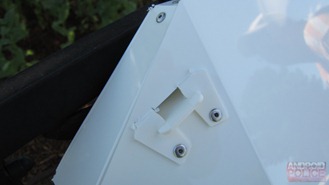 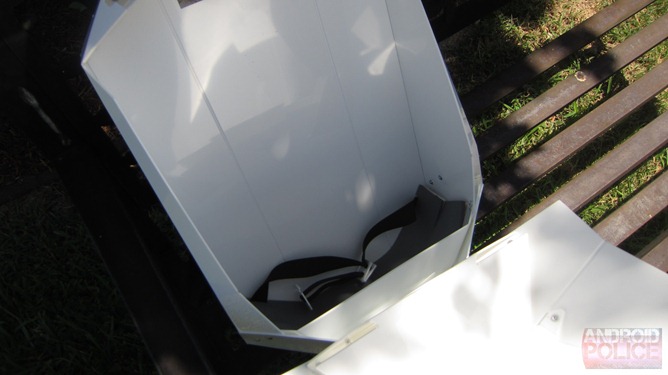 This, of course, is the first thing I noticed: there's no padding or laptop/tablet protection. No separate areas to keep other accessories from pounding against your precious gadgets as you walk/run/bike to your destination. The only padding in the entire bag is at the bottom, which is where the laptop/tablet rests.

Without separate sections to hold your laptop in place, what's to keep it from flying around all over the inside? One word: elastic. There's an elastic band that stretches up from the bottom and hooks into the top of the bag to keep your laptop and/or tablet secure. It's an interesting and inventive way to keep the laptop locked in place, and for the most part, it works pretty well.

In front of the humongous laptop section is the first of the aforementioned "small stuff" sections. This is where you can stuff things like USB cables and earbuds, but it won't hold much more than that. Above that, on the front "flap," is the second smaller compartment, and this one has a lid of sorts. It isn't much larger than the other, and it holds about the same amount of stuff.

Directly above (or below, depending on your perspective) that is a curious little flap thingy. I couldn't figure out what this was for until I dug around on the Solid Gray website for a bit; turns out it's to hold papers and the like in place. That's actually pretty dang clever. Best of all: it actually works. 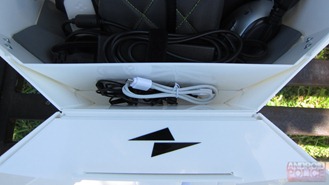 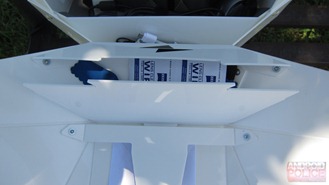 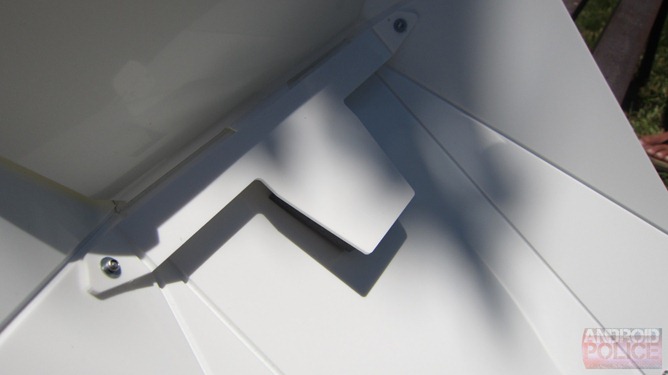 After pulling, prying, bending, and twisting the Solid Gray, I'm quite impressed with the overall build quality. Since it's constructed out of a solid piece of flexible plastic and held together with small metal rivets, there isn't a whole lot that can really "break" or otherwise deconstruct this bag. In fact, I imagine that it has a much longer lifespan than a typical cloth backpack.

Now you know how the Solid Gray works, but there's a bigger question here: is it practical? In short: that depends. 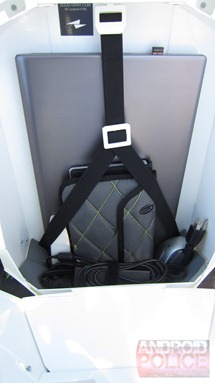 After staring at the Solid Gray for what seemed like a full day and a half, I knew what I had to do: pack it full of as much gear as I could and venture out into the world. Is it something I could use on a day-to-day basis? Is it comfortable? How much crap can I actually fit in here? Why the heck are all these people staring at me? For these questions, I was determined to find answers.

So here it is: the Solid Gray isn't for everyone. If you carry more than just a laptop, tablet, and smartphone (read: me), it's probably not the best option. Its lack of front pockets (or useful pockets at all, really), make it impossible for someone like me to use the SG as a full-time carry. I can't stand the thought of my "extra" stuff (camera, portable charger, wallet, keys, etc.) just bouncing around with my laptop and tablet inside the main compartment. In that aspect, it's just not practical. However, for someone who only carries a laptop and tablet (read: my wife), it's awesome. In fact, she loves the Solid Gray, and it suits her needs perfectly; where I carry a lot of different things, she needs very little. Yes, I'm the high maintenance one in our relationship; thanks for noticing.

This brings me to my next point: the polypropylene that the SG is made of is flexible, but not quite flexible enough. When packed with gear, it does get a bit uncomfortable after a while, because it just doesn't flex to the shape of the body (and the un-padded shoulder straps don't help much, either). Also, because it's solid, it doesn't breathe at all. This makes your back very, very hot after a while. Speaking of, it gets quite hot here in Texas, so I worry about the safety of my precious gadgets while in the SG backpack as there's no insulation of any kind to keep the inside from getting 150,000 degrees. 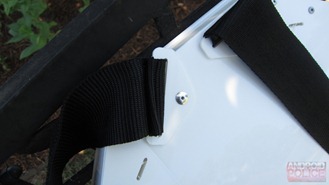 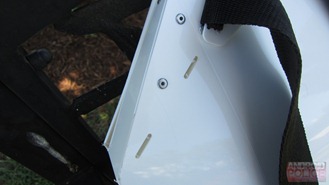 As I previously mentioned, the inside is actually quite large. I was able to fit my Samsung Series 7 15.6" laptop, along with the charger and mouse, Nexus 7 inside of a padded case, and Bluetooth tablet keyboard all in the main compartment, with plenty of room to spare down in the bottom (again, though, I'm not OK with just tossing other things in there to float around). The smaller compartments, however, were not as useful. I tried to fit my portable charger inside of either of them, but it was just too large; as a result, it caused the plastic to warp and the bag wouldn't close correctly. Ergo, I just threw some earbuds and a short USB cable in one, and a cleaning cloth and some cleaning wipes (for glasses) in the other. Sadly, they wouldn't hold much more than that.

Once packed and ready to go, I set out into the wild, cruel world. People stared... a lot. Many of them seemed to be peering into my very being, as if to say "hey man, what the hell is that thing on your back?" Unfortunately, many people where I live are overly rude and would rather stare at you for 15 solid minutes trying to figure out what the shell on your back is all about instead of asking a simple question. One which I would've gladly answered with fervor.

As always, I like to conclude reviews with the same question: do I recommend this product? As you may have already guessed, the answer is "possibly."  If you carry around multiple gadgets and accessories, the Solid Gray is probably not the best option for you. However, if you only need to carry a laptop and/or tablet, are looking for something with an in-your-face, edgy design; or just want to stand out in the crowd, the Solid Gray is a great option. At $170 USD, though, it may be difficult to justify considering its [mostly] impractical design and lack of good storage options. Then again, it's likely that this bag will outlast its cloth competition by months (possibly even years), so it may actually save you some money in the long-term. 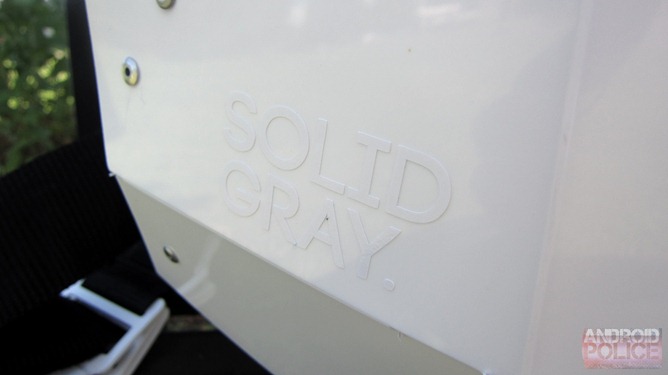