"The playground is open."

That's the declaration attached to every piece of Nexus 7 advertising on the internet. The point Google's trying to get across is that the Nexus 7 is, first and foremost, a media device. Reading, watching, listening, and gaming - those are the use cases Google had in mind when they designed the N7.

The result is that the Nexus 7 is not just a new device, it's a new type of device, at least as far as the Android UI is concerned. When Google set out to design a 7 inch tablet from the ground up, they completely blew up the standard Android tablet conventions. The N7 UI is not quite phone, not quite tablet - it's a crazy mix of both. 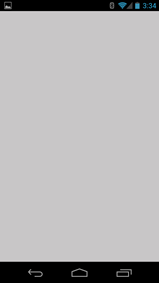 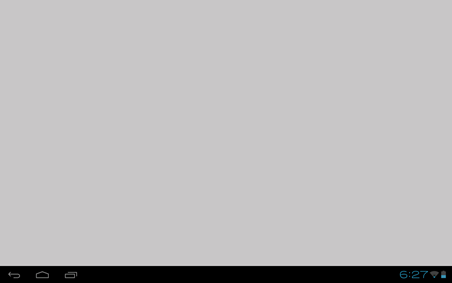 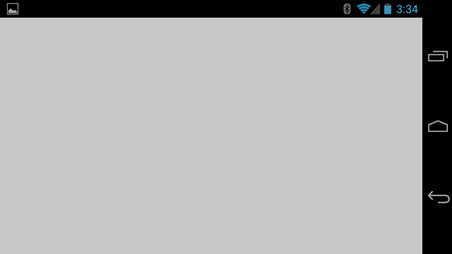 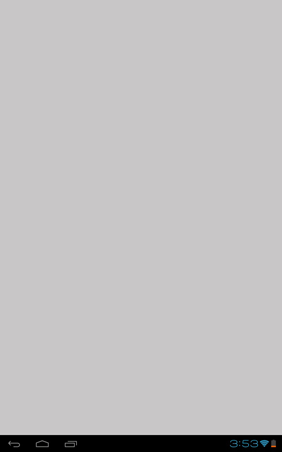 Until a few weeks ago, the left examples, above, were how phones worked, and the right ones were how tablets worked. When the Nexus 7 was unveiled, this clean phone/tablet division came crashing down: 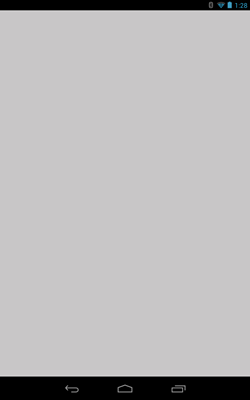 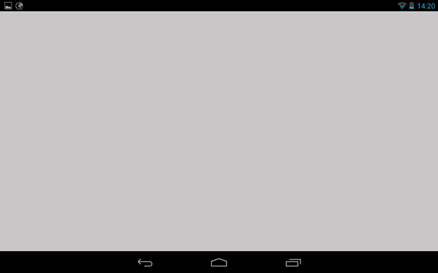 This is the Nexus 7's system UI. It's a third style of device - a phone/tablet hybrid. The dual-bar, centered button layout of a phone, and the all-orientations-are-equal rotation of a tablet.

This seems like the most logical rotation style for the dual bar UI, but things don't work this way on phones. The reason being, in landscape, vertical space is at a premium, and 2 horizontal bars would suck up too much screen real estate. On a bigger device like the N7, however, you've got more breathing room, so Google opted for consistent button locations - they're always on the bottom.

It turns out, this is a great boost to gaming usability. With bottom centered buttons, you are much less likely to accidentally hit a system button while blowing stuff up. Observe:

Consider the typical "touchscreen game pad" control scheme, like in Dead Trigger. On the Galaxy Nexus, your right thumb is precariously close to Back and Home. One errant finger movement and your gaming session is over. The same is true with a regular tablet layout, except this time, it's your left thumb that could accidentally end your good time, thanks to the left-aligned system buttons. 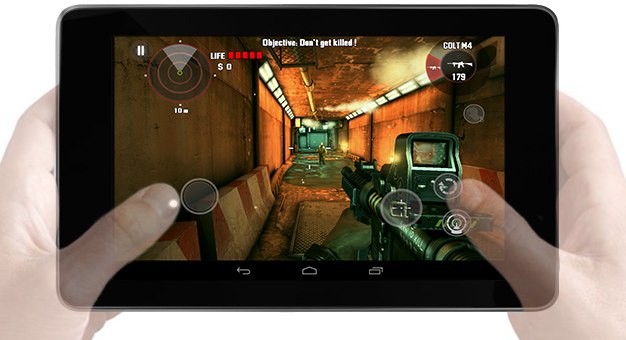 On an N7, however, the system buttons are at the bottom-center of the screen, and safely out of the way. No matter how heated your gaming gets, you'd have a hard time accidentally hitting Back or Home. The positioning is even reminiscent of the centered "start/select" buttons on a real controller. In fact, hold an Xbox 360 controller up to the Nexus 7 and you'll see a startling resemblance: 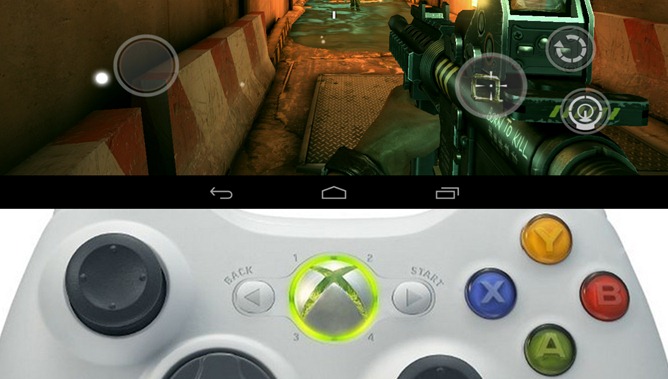 The Xbox's and N7's system buttons are in a near-identical location!

While hidable buttons would, of course, be ideal, this is a good compromise between accidentally hitting the system buttons and the "where did my buttons go?" problem a hidden bar would create. Phones don't have the vertical space to accommodate a layout like this, but I'd be interested to see what happens to the 10 inch tablet layout in the future. It too could benefit from something like this.

The Nexus 7 is pitched as a great media consumption device, and for good reason. Little tweaks like this make all the difference. Matias Duarte, the head of Android UX, even confirmed the button placement gaming considerations in a Google+ thread. The N7's weight and size make it a great device to game on, and this new button layout is just icing on the cake. It's not just ad copy, folks, the N7 really is designed for fun.