Prev
Posts in the last
24 Hours
sorted by
Hottest
Next
Update: If you have some sort of unholy vendetta against Best Buy and refuse to order anything from there, you'll be glad to know that Amazon now has the same deal. Both white and black versions of the Atrix HD are now $50 for new and existing customers. 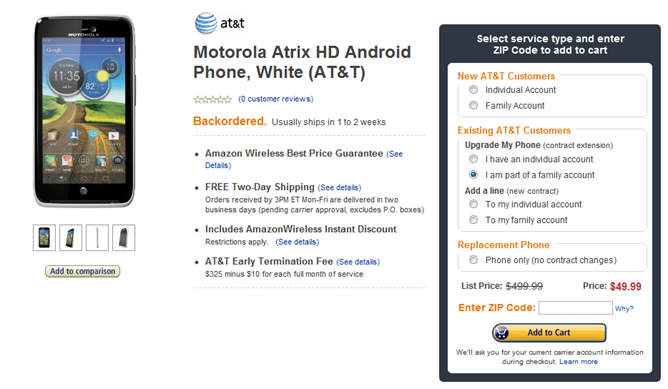 Well, would you look at that. The new Motorola Atrix HD "4G" officially went on sale just today, and Best Buy has already chopped off fully half of its reasonable asking price. You can pick up the 4.5-inch, 1.5Ghz dual-core ICS phone for just $49.99 online. The sober black ("titanium") version is in stock, but the white version going for the same price is not. Local stores may price match if you've got your heart set on the latter.

If you're not a fan of Best Buy, Amazon Wireless has a consolation prize: existing AT&T customers can pick up the Atrix HD for $69.99, a savings of $30 on the list price. Once again there's plenty of black to go around, but the white version is backordered. New customers, strangely, aren't eligible.

Having tested both the previous Atrix phones (Atrices?) I can say that the third iteration will probably be solid without blowing anyone away compared to other recent hardware. But hey, it's a value-priced phone with a 720p screen, Ice Cream Sandwich and an LTE connection. What more could you want? Well, an unlockable bootloader for a start, but Motorola says it's working on it.