I love Evernote. In fact, I don't go a single day without using it. And today, I love it even more. The Evernote Team just pushed an update to the Android app that makes it even more useful on tablets by introducing an all-new user interface.

Here's what I love about it: the old interface was good. It was functional and intuitive, I had no complaints. But the new interface is better and more intuitive. They introduced a fantastic new swiping-style layout that lets you flick through notes and notebooks (much like the phone app). Once a notebook is opened, though, it's quite similar to the previous interface and scrolls vertically. When you open a note, same thing: it looks very similar to the previous version, but it just has more options. Oh, and it's just cleaner and more polished looking, too. 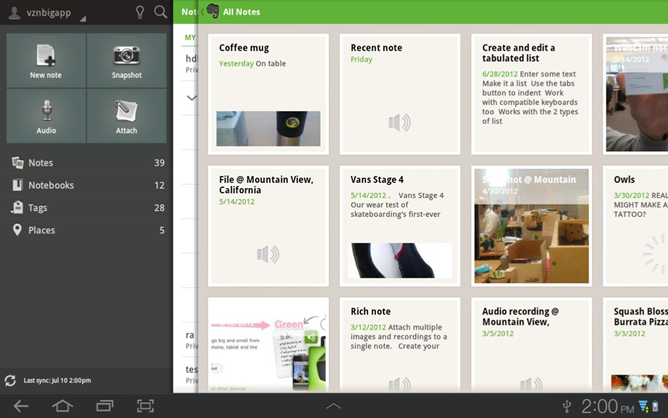 This new version of the app actually makes me think of the newest iteration of the G+ app. Not in how it looks, but in the fact that it's very, very similar to its phone counterpart, but certain elements are clearly optimized for tablets. For example, if you prefer the "list" notebook view of the phone application (instead of "grid" view), you can now use that on tablet with a simple switch. It's fantastic.

Aside from the enhanced interface, the Evernote team also added improved bullet lists (you can now add sub-lists), as well as improved slideshows, and a handful of bug-fixes/under-the-hood enhancements. Go get it!

Google Wants To Co-Defend HTC Against Nokia In Patent Lawsuit