We can easily forget some of the mid-range to lower-end devices in the flurry of news we have to keep up with. Thankfully, though, T-Mobile and Samsung haven't. At least not in the Blaze 4G's case. This device is currently in the process of receiving an update to Android 2.3.6. It was already running Gingerbread, so this isn't a huge update. What is big, however, is T-Mobile has announced that some time in the future, the device will see Ice Cream Sandwich. 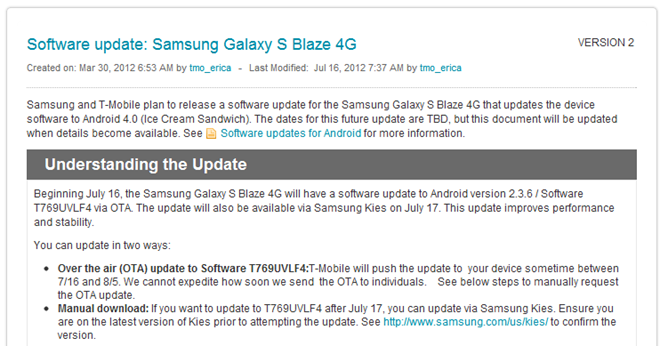 Yes. It's annoying to hear that the companies are only now announcing plans for last year's OS, just after Jelly Bean was announced, but hey, this is a mid-range phone we're talking about, after all. Ice Cream Sandwich marks a major transition for the Android platform, particularly in app and UI compatibility, so making it across the 4.0 line should be good news for everyone, even if the latest and greatest stays a bit out of reach.

As for today's update, if you own this device, the update should be rolling out to you via an OTA download now. Alternatively, you can plug your device in to your computer and install it via Kies starting July 17th. Happy downloading!