To that end, things aren't looking great for Sprint's new 4G network – at launch, it is promising just 6-8 Megabits per second download speed (burstable to 25Mbps) and 2-3 Megabits per second upload. While these speeds are certainly faster than the Now Network's 3G alternative, they aren't exactly what consumers may have expected from a new LTE network. 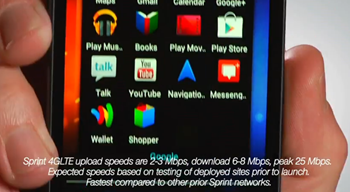 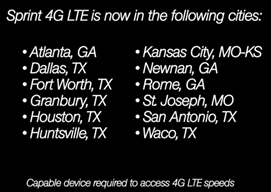 For reference, we can look at Verizon's promised LTE speeds – Big Red officially indicates "average data rates of 5 to 12 Mbps on the downlink and 2 to 5 Mbps on the uplink" with peak download speeds of 40-50Mbps and peak upload speeds of 20-25Mbps.

While official information from AT&T regarding its own LTE speeds isn't readily available, GigaOM reports average speeds of  ~13-17Mbps down and 6-8Mbps up.

All of that being said, Sprint's LTE network is an improvement over both its 3G and WiMax offerings (the latter of which will be phased out by 2015), and the Now Network is already planning to up the ante at some point in 2013 with LTE Advanced.

While the advertised speeds of Sprint's initial markets may seem a little dismal in comparison to other networks, your mileage may vary. If you're in one of Sprint's new LTE markets, let us know what kind of speeds your device is achieving.

Samsung Shows Off SGSIII's Intelligence In Demo Video, Defines "Ironic" For Our Amusement ...

Pre-Built XBMC Apk Is Available, Here's What It Looks Like Running On A Nexus Q