Verizon has taken some flack lately for being the only US carrier to lock the bootloader. Workarounds have been implemented, but Samsung's taken it a step further by announcing a developer version of the device. Today they...well, they haven't quite made good on that promise, but they have created a landing page for the device on their site that announces the 32GB Pebble Blue version will be "coming soon". 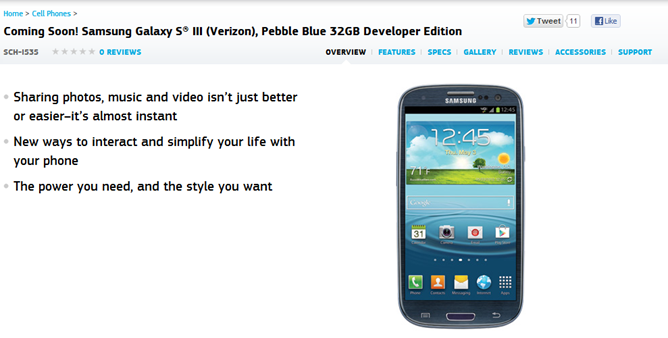 It doesn't look like pre-orders are available yet, although we know the device will retail for $599 when it finally launches. Previously, Verizon had tried to claim that Samsung was responsible for the locked bootloader, but since virtually every other version of the device did not have a locked bootloader, and now Samsung is going out of its way to get an unlocked version in the hands of its customers, it's a little tough to stomach that idea. What is clear is Verizon simply does not like unlocked bootloaders for questionable reasons.

[Video] CM9 Finds Itself On The Nexus Q – CyanogenMod: "This Should Serve As An Indication Of ...