Sprint hasn't been the most secretive about the white version of its EVO 4G LTE, as we've already seen. More than once. Now, though, The Now Network has officially taken the wraps off this white handset, and guess what? It's still two-toned. And To add insult to injury, the kickstand isn't red anymore. 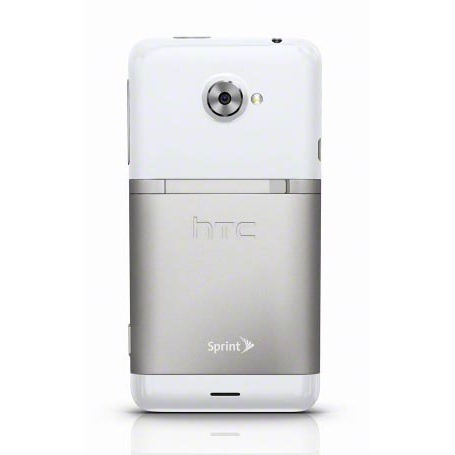 I was really hoping for a sexy all-white device with that brilliant red kickstand, but it's clear that HTC and Sprint had a different vision: boring. Sure, it's clean, but it could've been so much more. Alas, that's not the point. I've digressed.

The white version houses the same guts as its black counterpart:

If you've been holding out for this white EVO, your wait comes to an end in just a few days: it will be available on July 15th for $199 with a two-year agreement. Hoorah.

OVERLAND PARK, Kan. (BUSINESS WIRE), July 12, 2012 - Sprint (NYSE: S), the only national wireless carrier offering truly unlimited data for all phones while on the Sprint network1, and HTC, a global designer of smartphones, are giving customers another reason to love the smartphone lauded by respected reviewers with the addition of HTC EVO™ 4G LTE in white. The stunning white smartphone is framed by its aluminum unibody and sports a matching silver kickstand and aluminized back plate for a sleek and refined look.

HTC EVO 4G LTE will be available in white beginning Sunday, July 15, exclusively in all Sprint-owned sales channels, including Web Sales (www.sprint.com) and Telesales (1-800-SPRINT1), for $199.99 with a new line of service or eligible upgrade and two-year service agreement (excludes taxes). HTC EVO 4G LTE launched in May and is currently available in an anodized black finish in all sales channels.

Martin Fichter, vice president-Product Management, HTC America, said, “HTC’s amazing camera and authentic sound experience bring the HTC EVO 4G LTE to life as a true successor to the original HTC EVO, one of the most successful Android franchises in the United States.”

HTC EVO 4G LTE, exclusively from Sprint, is a multimedia powerhouse designed to deliver a high-definition experience at 4G LTE speeds. It focuses on exceptional improvements in camera technology, audio and voice quality on both the network and device.

HTC ImageSense™ brings improvements to the amazing camera experience featuring a superfast autofocus to enable continuous shooting of up to 99 images, the ability to capture still images while taking video, and increasing the quality of photos taken in adverse conditions such as low light, no light or with bright backlighting. It also contains HTC’s authentic sound experience integrating Beats Audio™. The technology is enabled across multiple facets of the phone experience, including playing music stored on the device, streaming from a favorite service, watching a movie or YouTube™ video, or playing the latest hot game.

HTC EVO 4G LTE customers can enjoy an unlimited data experience with Sprint Everything Data plans. Sprint Everything Data plans with Any Mobile, AnytimeSM include unlimited Web, texting and calling to and from any mobile in America while on the Sprint Network, starting at just $79.99 per month for smartphones – a savings of $20 per month versus Verizon’s comparable plan with unlimited talk, text and 2GB Web3 (excludes taxes and surcharges).

Galaxy Nexus Now "In Stock" In The Play Store, Order Returned To The Universe (Or At Least The ...