Earlier today, the Jelly Bean source code rolled into AOSP (Android Open Source Project). This is a big deal - one we've been waiting for since the great Google I/O unveiling. What does it mean exactly?

It means that ROMs that are built from AOSP, like CyanogenMod, can now start integrating the Jelly Bean code and release the first true JB nightlies. Not broken ports from the Galaxy Nexus builds - real ROMs. They can also work out bugs because they can see the source code.

Manufacturers can now start working on updating their devices to the actual Jelly Bean release - remember, Google was still working on the final touches to JB when they released the preview, so even OEMs didn't have what rolled out today. The release is numbered 4.1.1, by the way, and the release version is JRO03C. That means nobody has it yet officially, not even the OTAed I/O Galaxy Nexuses or the Nexus 7s. Those OTAs should roll out shortly, and we'll be here to cover them - you can bet on that.

VZW Galaxy Nexus: There's Light At The End Of The Tunnel

But the release of the open source code was not the only highlight of this day. Google, which previously banished the Verizon Galaxy Nexus from being an officially supported AOSP device, seemingly restored it to that glorious status with the release of the previously unavailable proprietary binaries the source code of which is not open and instead maintained by other companies. These binaries are:

If you compare what we have available in AOSP now for the Verizon Galaxy Nexus to the GSM one, you'll see that they actually match:

In comparison, here's what we had before Jelly Bean, which was the reason toro (the codename for the Verizon GN) lost out to maguro (the GSM GN) and was not considered supported: 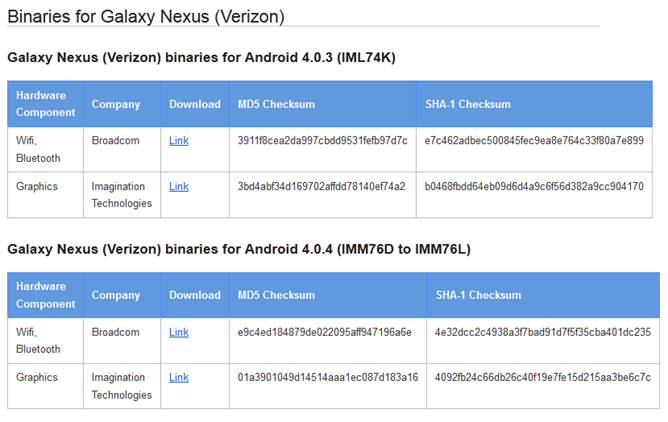 So, the birds are chirping again and the double rainbow is permanently visible in every direction we look, right? Not exactly.

I had suspicions that not everything would be so rosy because in the previous months based on my discussions with JBQ, the chief release engineer at Google responsible for AOSP, I knew things were moving in the right direction, but I also knew that not everything was sorted out. The following message was posted by JBQ to the android-building mailing list:

As for AOSP on the VZW Galaxy Nexus, it essentially matches the GSM version now.

It's always been possible to create custom builds for the VZW Galaxy Nexus (we've always distributed all the files we could), but from this point you can expect that they'll be easier to develop and that they'll work better in Jelly Bean than they did in Ice Cream Sandwich.

Bit then he added:

I don't consider toro to be higher than "experimental" at this point.

Upon seeing it, I reached out to him to discuss it further, and here's what I have to report.

The biggest problem with the term "Galaxy Nexus AOSP support" is it depends on the definition of "support." There are no binaries available for NFC, GPS, or camera for either variant of the Galaxy Nexus (toro and maguro), so in that sense they're almost equally supported. This still doesn't mean full support - if you ever see these missing binaries appear here, you'll know we're there. But we're not yet (my guess is these binaries are either reverse engineered or grabbed from released devices).

Moving past that, I did say "almost equally." Here's why, according to JBQ:

In theory, the VZW Galaxy Nexus should work as well in AOSP as the GSM one (which doesn't mean that everything works, we're notably missing Camera, GPS and NFC).

This'll get explained in greater detail on source.android.com as soon as I update it.﻿

He added (I mentioned this above):

You're pointing exactly at the problem: the notion of "supported" now needs to be explicitly defined.

There's now a big gap between devices that just don't work and devices that work really well, such that the mileposts now need to be better defined.﻿

At the moment, we're still waiting for the more detailed explanation, which, as Jean-Baptiste said, would appear somewhere on source.android.com.

In conclusion, today's developments around the VZW Galaxy Nexus are certainly very important, but there is still a lot that needs to happen before we can say the Galaxy Nexus is a true Nexus. The same goes for the GSM Galaxy Nexus too, but the Verizon one continues to remain a few steps behind.

We'll bring you further coverage of the state of the Nexus union once we have more information.

Sprint Had This To Say About AOSP Support For Galaxy Nexus