Note: There was one very welcomed improvement in ICS that sucked hi-res photos into Android automatically for contacts with associated Google+ accounts. This helps tremendously, but is more of a temporary workaround for both of the above. Additionally, it's part of the stock People app's functionality, so Sense and other OEM replacements don't benefit here. I thought I'd point this out, since it is indeed a noticeable improvement - just fire up your ICS+ device and start clicking contacts with G+ accounts. You'll see their images go hi-res and clear in front of your very eyes.

In Jelly Bean, contact photos can go as high as 720x720, and I've observed an improvement - contact sync from one JB device to another preserved the high resolution photo. Both devices (Nexus 7 and Galaxy Nexus running JB) were showing the same hi-res image, while an ICS tablet (Transformer Prime) got a low-res image: 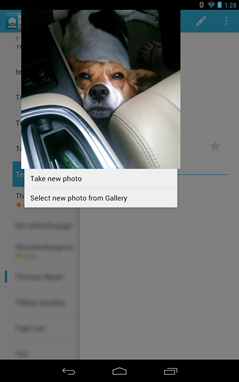 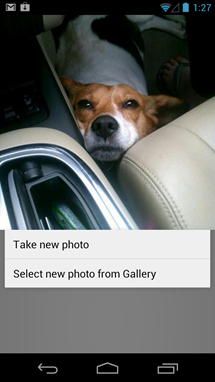 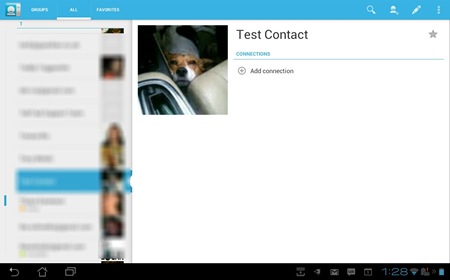 Could that mean that issue #2 was really solved in JB?.. At first, that's exactly what I thought. I even updated a few metadata fields that belonged to the same contact and observed no change in photo quality. This right there is already a huge improvement over ICS. So, case closed, right? Wrong.

And then I removed the Google account from the Galaxy Nexus and re-added it. I waited for the sync to complete. At this point, something I could not have predicted occurred. Would you like to take a guess? Maybe even two?

Alright, I'll tell you. The Galaxy Nexus running Jelly Bean no longer had a contact photo. At all. The photo on the Nexus 7 went from hi-res to low-res. How's that for a curveball? I've run the same test a few times, and the result was the same every time. Here, zoom in if you want: 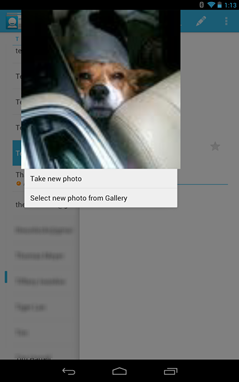 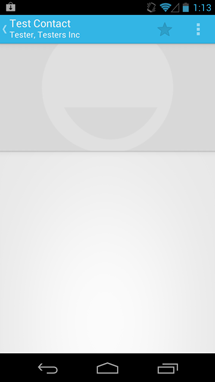 So Google sync now correctly syncs hi-res photos between Jelly Bean devices, the changes are not permanent, and the whole thing is a terrible mess. Eventually, hi-resolution photos end up clobbered with low-res garbage. There was a lot of commotion around the quality bump in Jelly Bean, but it seems like Google still hasn't fixed the fundamental issue, and the self-destructive behavior continues. It's possible that once every device moves to Jelly Bean, this will stop happening, but I believe it will take a lot more effort on Google's part to make sure that doesn't happen first.

I have a few ideas on what goes wrong behind the scenes, but the exact technical reason really doesn't matter - Google contact photo sync is still a clusterf$%^#, even with Jelly Bean. It's a shame, really.

Your move, Google, once again. But hey, if even Vic couldn't get it fixed in over half a year, I am not getting my hopes up.

Flow Is An Amazon-Powered Augmented Reality Product Search App That's Not Really As Cool As It ...