Why? Google's absolute silence on Google TV (GTV) during I/O keynotes represented, as I saw it, the last straw for the platform (at least in its current state). Of course, Google TV hasn't really seen much action since last fall, but after former Google CEO Eric Schmidt promised big, magical things for this summer, it seemed Mountain View might still have some GTV tricks up its sleeves. As it turns out, those sleeves were empty, and the company now seems to view its attempt to save us from cable boxes as a dead horse.

Schmidt predicted Google TV would be on the majority of televisions by this summer. While we don't have updated stats on that, as of late February, the number was only 1 million total users. We haven't exactly seen any evidence that number has suddenly started to increase exponentially, as would be necessary should Google want to reach all ~115+ million TVs in the US.

And I'm not expecting that to change any time soon - frankly, Google TV is going nowhere fast. Here's why. 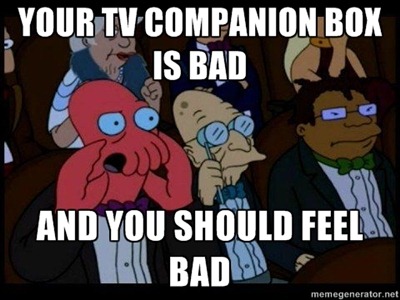 We Could've Had It All

When Google TV was originally released, almost every single reviewer - even those who hated it - seemed to agree that the platform had much potential yet hanging in the stars. And it's true: had content providers signed on (they didn't), Google TV could, potentially, have changed content consumption entirely. If all had gone well, we could now be relying on an entirely Internet-based model of the TV, complete with free, on-demand content from providers like Hulu.

The keyword being "potential." As I see it, there are three reasons this potential remained as unutilized as the leftover gas in a sinking boat, and will likely continue to do so:

So, that should explain Google TV's commercial failure. But there's more.

Obviously, point #2 directly affects the end user experience, as it means less content will be available to the consumer; however, that's not the only reason Google TV is failing not only commercially, but also from a usability standpoint.

For one thing, due in no small part to Google's aforementioned silence on GTV at I/O, it's still not clear whether the platform will ever advance beyond Android 3.x. For another, it's still missing basic Android apps like CNN and Angry Birds (c'mon, don't tell me you can't fling birds with a trackpad - it's been done before). And that's not to mention the UI, which has been universally deemed so hideous that manufacturers have already begun to overlay it. This all checks back the extent to which one can enjoy a GTV-powered device - after all, a platform can only be as good as the apps that run on it and the ways in which you can interact with it.

But in spite of all this, there may still be hope - certainly not with Google's current attitude toward GTV, and perhaps not even with the current branding - but maybe, just maybe, Mountain View can pull a similar product off.

Rather than commissioning Google TV as its chief commander in the invasion of our living rooms, Mountain View's I/O keynotes indicated the company seems to have changed up its strategy so that it's now focusing on the $300 "social streaming media player" that is the Nexus Q (NQ). At first glance, this might make at least a little bit of sense - GTV's sales, as we've already discussed, have been less than spectacular, so the Big G might have wanted to try a different approach to home entertainment. Unfortunately, it seems to have jumped on a boat that has several major holes in it - and is already filled with water.

Let's set aside, for a moment, the myriad bugs early reviewers have discovered in the NQ (though these alone could, arguably, disqualify it from the public stage). I think there are three main problems with the device as is: A.) It's $300! B.) I'm not sure anyone outside the tech blogosphere understands what a "social streaming media player" is, and I'm even less convinced that after finding out, they'll still be interested in coughing up three Benjamins to own one. C.) Did I mention it's $300?

However, the Nexus Q isn't totally hopeless. In my view, if Google could somehow combine it with Google TV - and slash its price tag by at least $200 - they could potentially have a winner on their hands. This shouldn't be all that hard - the NQ can already plug into your TV via microHDMI, and it does have Android 4.0.4 under its hood. Why, then, couldn't the NQ initiate a GTV setup when plugged into your TV? It certainly has the necessary horsepower - both the NQ and the latest GTV models have dual-core processors, so that shouldn't be an issue in the slightest.

I'm not quite sure why Google chose to fork the Nexus Q off from what was previously its main reach into the living room - separately (at least in their current forms), I think both the NQ and the GTV are doomed to failure; together (and in modified forms), I think success would be far more likely.

It's often said that two wrongs don't make a right, but in this case, I think that by combining the commercial/content failure that has been GTV with the pricing/functionality failure that is the Nexus Q (and pricing the resulting package affordably), Google could finally take over the living room once and for all.

Again, this won't happen without a significantly higher interest investment from Google in its eponymous TV companion. But it might be worth it - it could pave the road for more content (through considerable deals with providers), better adoption (through a major marketing push), and ultimately an affordable product that doesn't suck (through GTV- and wallet-friendly modifications to the Nexus Q).

Honestly, though, I'm not holding my breath - smartphone/tablet versions of Android understandably remain a priority for Google, and it doesn't really seem like that's going to change anytime soon. And so the vicious cycle continues, and the boats continue to sink.