The contest is now over. Here are the winners, selected at random:

Everyone else - keep participating and stay tuned to Android Police so that you don't miss our upcoming giveaway announcements. You can follow AP on Twitter Facebook, Google+, and RSS.

There are a lot of integrated development environments out there, and when it comes to Android, Eclipse is one of the most popular. As always, Apress has every budding developer's back with a book written specifically for getting people up and running on the IDE. The book is called Android Apps with Eclipse, and it covers everything from installing and configuring Eclipse to finalizing and tweaking your app. 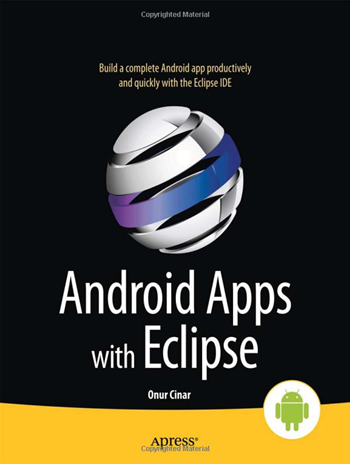 Eclipse is the most adopted integrated development environment (IDE) for Java programmers. And, now, Eclipse seems to be the preferred IDE for Android apps developers.

Android Apps with Eclipse provides a detailed overview of Eclipse, including steps and the screenshots to help Android developers to quickly get up to speed on Eclipse and to streamline their day-to-day software development. This book includes the following:

Who this book is for

This book is for both beginner and intermediate developers who would like to quickly come up to speed on Android development using the Eclipse IDE.

Developers who follow along with the examples in the bok will build a movie player app, then learn to add AVI support to it. It will also teach how to script for the app using Lua.

Apress has been generous enough to partner up with us to give away 10 copies of Android Apps with Eclipse. To enter, just leave a comment telling us what kind of app you want to create with your new-found skills. Be sure to include your email address so that we can contact you if you win!

The contest is open to everyone in the world (fully international) and will run from today (Saturday, June 30) until Wednesday, Thursday, July 5 at 11:59 PM PST. Winners will be chosen at random and contacted via email.

Google Announces Mobile App Analytics, Lets You See The Who, Why, And Where Of Your Mobile App Users

[Editorial] Google TV Is Bad, And Google Should Feel Bad