Man, news is coming fast and furious, isn't it? Here's another one to add to the pile: a big YouTube update. The "What's New" section on the Play Store reads:

Android 3.2+ devices: v.4.0
* New UI: Guide on the left side of the screen with instant access to channels
* Preload videos while on WiFi and charging for smooth playback on the go
* Turn your phone into a remote, to play YouTube videos on other devices
* Access your watch History across devices

First up, let's check out the new look: 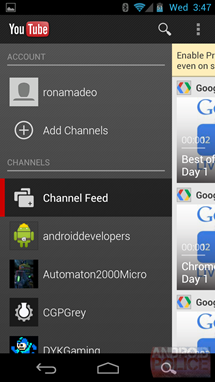 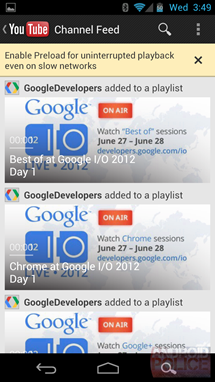 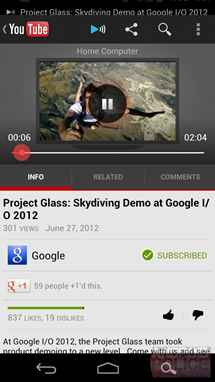 YouTube has switched to the same left-side menu style as Google+. Hitting the Up button (the YouTube logo in the top left) will make the UI slide over to reveal it. The video list looks a lot like Google+, too. You get wide thumbnails with info overlaid on top. Tapping a video brings up the new player page, with a like/dislike bar, and redesigned timeline scrubber.

You may have also spotted the new play button icon in the action bar, that's for a remote screen control feature called YouTube TV. 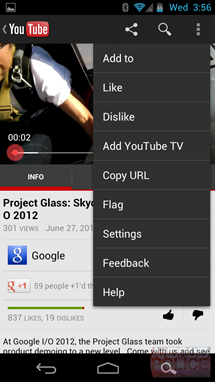 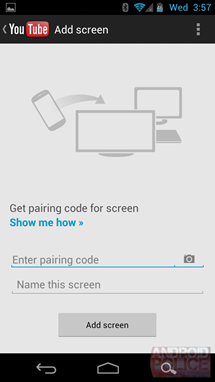 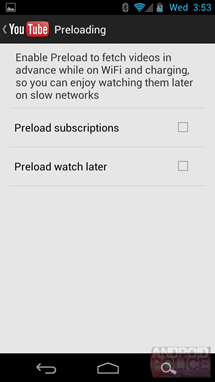 YouTube TV is basically YouTube Remote, but fully integrated. YTTV lets you control any device with a web browser from your phone. Visit youtube.com/leanback on the viewing device, hit pair, and you'll get a code. On Android, hit the menu button and tap "Add YouTube TV," and you'll get a spot for the code. Now you can remote control your TV from YouTube. This setup is a one time thing, it will remember your devices from now on! easy!

The other picture up there is of the new Preloading feature. You can also automatically download videos from your subscriptions or your "watch later" list, for easy viewing on crappy connections. 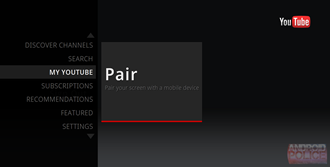 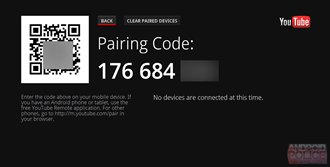