If you've been wanting to check out Google TV but just couldn't justify shelling out a couple hundred (or more) dollars for the sake of seeing what it's all about, Vizio's new Co-Star Stream Player could be the answer you've been waiting for. 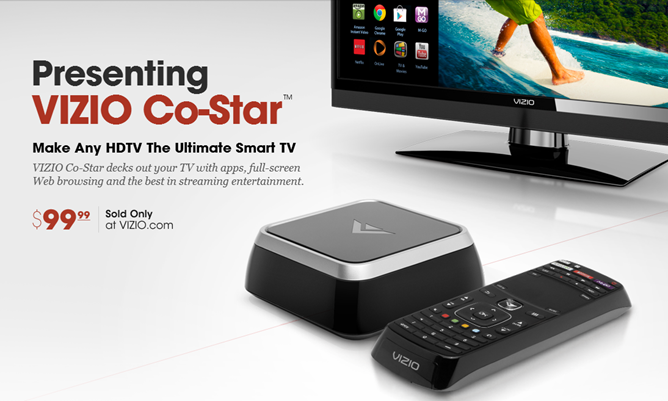 Announced just today, the Co-Star is a $99 Google TV that connects to your current set-top box via HDMI pass-through. It offers the full-on Google TV experience, including an HTML 5 Chrome browser, 1080p and 3D support, a host of apps, and a two-sided universal touchpad remote. What's more, the Co-Star also features baked-in support for OnLive streaming.

On paper, the Co-Star sounds like quite the impressive little gadget, especially for the low price of $99. We won't be able to find out how impressive just yet, though; Vizio won't begin taking pre-orders until next month. In the meantime, you can sign up at Vizio's site to be notified of when that actually happens.

Unique to the stream player market, the VIZIO Co-Star offers the distinct advantage of connecting to a cable or satellite box. This allows viewers to enjoy live TV along with the web, apps, OnLive cloud gaming, and other streaming entertainment without interrupting what they're already watching. This integrated experience along with the universal touchpad remote with keyboard eliminates the need to switch TV inputs or remotes to access alternative content and provides viewers with a truly smart TV experience.

"Our focus to deliver the best consumer experience continues with today's announcement of the Co-Star, which delivers a superior smart TV interface that anyone can add to their existing HDTV," said Matt McRae, VIZIO's Chief Technology Officer. "We combined the powerful features of Google TV™ with an intuitive and easy to use interface, giving users the power to enjoy an entire world of entertainment."

The added benefit of Google TV's powerful search feature lets viewers easily browse websites, hunt for streaming movies or locate their favorite TV shows; and with picture-in-picture technology, it can all be done while simultaneously watching live TV action.

In addition to favorite apps such as Netflix®, Amazon Instant Video, M-GO, YouTube® and iHeartRadio, the VIZIO Co-Star is the first stream player to offer video games on demand through the OnLive® Game Service.  OnLive allows users to demo, watch and play hundreds of top-tier video games directly from 'the cloud' via their VIZIO Co-Star, eliminating the need for users to own an independent game console. With easy access to thousands of apps through Google Play, Co-Star offers the most comprehensive stream player available today.

Complementing the overall experience, the VIZIO Co-Star includes a universal Bluetooth® remote with an innovative touchpad that lets you touch, tap, scroll and drag. A full QWERTY keyboard helps users search for their favorite entertainment.  Plus, its universal feature makes it easy to control home entertainment devices with one remote.

The VIZIO Co-Star incorporates a number of power user features intended to satisfy the variety of user demands, starting with support for 1080p Full HD and 3D entertainment. Built-in 802.11n Wi-Fi provides easy wireless Internet access without unsightly wires. Integrated USB port connects to hard drives, keyboards and other peripherals. The VIZIO Co-Star even enables viewers to enjoy photos, music, and movies from any DLNA-enabled phone, tablet, or computer on the TV screen.

The VIZIO Co-Star exceeds expectations by combining a definitive user experience with a powerful smart TV platform, resulting in an all-in-one solution that brings the ultimate smart TV experience to any HDTV.

The VIZIO CO-Star will be available for pre-orders in July 2012 only on VIZIO.com for $99.99, with an introductory free shipping offer, while supplies last.

**High-speed/broadband Internet service and access equipment are required and not provided by VIZIO.  Additional fees and/or subscriptions may be required for certain content and services.  VIZIO makes no warranties, representations, or assurances of any kind as to the content, availability, or functionality of third party content or services.

Google TV Site Has Been Completely Overhauled, Shows Off All The New Google TV Hotness