HTC's marketing of Beats Audio on its One Series handsets has rapidly become a joke among critics and internet commentators alike. And that's probably putting it nicely. The fact that the entirety of the Beats "enhancements" found on aforementioned phones has been zipped up and packaged to flash on any Android 2.3+ handset has, at least in the collective minds of the internet, exposed the Beats partnership for what it is: equalization software and a fancy logo.

I've used all of HTC's One Series products aside from the One V; that is to say, the One X, XL (AT&T One X), and S. The XL and S both really impressed me with the quality of audio they produced, and as something of an amateur sound junkie, I appreciated this fact. When I got my hands on the international version of the One X with NVIDIA's Tegra 3 quad-core processor, my ears did a double-take. It wasn't just different - it was worse.

Is there something wrong with my headphones? Am I just imagining the difference? Maybe I should try listening to a different song. Perhaps I've been listening to my music too loud lately.

For weeks, these thoughts have absolutely nagged at me. I tried to convince myself I was hearing things that weren't there - that I was having some sort of strange self-perpetuating placebo effect. Then, when I was reviewing some headphones over the weekend, I started to listen to some of my go-to comparison tracks through my One X. Suddenly, all of my headphones sounded a lot more similar than I was used to. And almost everything sounded harsher.

It was like the One X was taking my songs and making them less pleasant. I actively avoid turning the volume up too high because sound becomes grating and unsettling, especially at high frequencies. High notes almost elicit that feeling like nails on a chalkboard when I enable the Beats mode. It's not like it's unlistenable, but music is simply less relaxing to listen to, and after a while, I have to stop and take a break because of it. This isn't one of those "well, that's like, your opinion, man" things - my One X is doing something bad to my music. Going over to my stereo receiver with my PC's sound card pushing audio is like unclenching my jaw after 30 minutes, my ears actually feel physical relief at the difference.

Anyway, before I bore you to death with my ramblings on how it sounds, I can say with very high confidence that the Tegra 3 version of the One X has noticeably inferior audio compared to the One S or XL. And the reason for that is actually pretty concrete: the Tegra 3 version of the One X (the one being sold all over the world) has a different audio chipset than the XL version being marketed in the US (the AT&T One X).

If you're familiar with the concept of a system-on-a-chip (an "SoC"), you know that it involves integrating a number of components onto a single piece of silicon. It saves space and energy, and is a big part of why smartphones have been able to get so thin and powerful so fast. The audio portion of the chipset involved in pushing sound to headphones includes, to simplify it, two major components: the DAC (digital to analog converter) and the headphone amplifier or "driver." They're packaged together into something called an "audio hub." 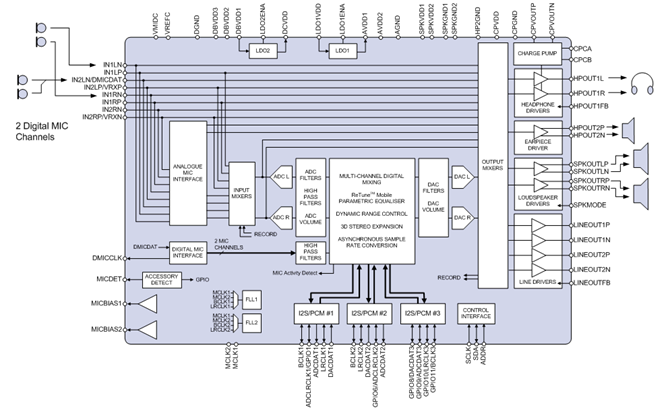 What an audio hub looks like. Exciting, I know.

Qualcomm's S4 chipset uses Qualcomm's proprietary audio hub, the WCD9310. This chipset is found in the US versions of the One X, One S, and even Samsung's Galaxy S III (only the international Galaxy S III will have a Wolfson DAC, sorry guys). And it's a really good audio chip. NVIDIA's Tegra 3 SoC uses (probably) a Realtek DAC of unknown model. What I do know is it's not a very good one.

But audio is one of those things where anecdotal evidence is rarely accepted by skeptics - and for good reason. Sound is a lot like wine, a good blind test can make fools even of renowned experts. However, almost anyone can taste the difference between a bottle of two-buck Chuck and the top-shelf stuff. And between that, there's still a lot of room where with patience most people can learn to distinguish the five-dollar swill from the good cheap stuff. Just like there is great cheap wine versus okay cheap wine, there's good mobile audio, and then there's passable mobile audio. The Tegra 3 One X falls into the latter camp.

Don't take my word for it, though, the folks at GSMArena have saved me the legwork and compiled enough empirical evidence on the matter to help put it to rest: placed next to the competition, the international One X pumps out sound that is inferior, and it's even inferior in some ways to phones that came out 2 years ago.

Before I start doling out the data, you need to know a couple of things about audio characteristics. One of the key measures of the quality of audio output components comes from something called the dynamic range. This probably makes some sense even if you don't know exactly what it means. This is a measure (one of several) of, basically, the audio output source's range in which it can produce sound without causing significant distortion, versus the "noise floor" - the amount of noise when no audio is being pushed through the system. The human ear has something like 130dB of dynamic range - more than a lot of studio equipment. Which is to say, it's very sensitive. The average MP3 track, even at 128Kbps, has around 96dB of dynamic range (for a "16-bit" track).

More dynamic range is better, because that means the audio output source is able to produce a larger range of sounds without distorting them. It's by no means an end-all, but good audio equipment has a strong dynamic range.

Now, if you're familiar with the Nexus One and Galaxy S II, you know they didn't produce fantastic sound. And both of them outperform the One X for dynamic range. The One X gets absolutely pummeled by every single phone in this comparison. In the "noise level" test, a similar sort of range measure, it also loses handily. It's not even close. You'll find numerous other comparisons on this page at GSMArena, all of which the Tegra 3 One X loses when compared to its major competitors.

But I'm going to put one more here that I think explains the unusual harshness (and frankly, unpleasantness) I've experienced on the One X - and that's the IMD+ noise measurement. This is, to put it simply, a measure of an audio output source's tendency to create, as a part of the process of digital to analog conversion, noises at frequencies which are not harmonically similar to the actual audio recording. These noises sound bad - they're out of place and disrupt the natural harmonic qualities of music. It's like hearing someone play a piano that's slightly out of tune with itself, it makes you wince a little.

This is as opposed to harmonic distortion, which the human ear actually finds somewhat pleasant in limited quantities, and helps provide speakers and headphones some of their aural character (this is where those fuzzy words like "brightness" and "warmth" start to come into play). So, here are the numbers for the bad kind of distortion:

The Galaxy S II is the standout loser here, but the One X isn't far off by any means. And the iPhone 4S and Galaxy S III, and even the One S, absolutely obliterate the One X is this test. No one measure spells audio doom for the One X, but the fact that it is worse in every one one of GSMArena's tests compared to the 4S and GS3 (many by large margins) is just kind of sad. And it's that across-the-board failure that leads to the mediocre audio experience on the One X. It's not awful, but I invite anyone to do a side-by-side comparison with an iPhone 4S (or 4) or One S. The difference is definitely noticeable.

For lower-fidelity audio (eg, Spotify, Pandora, other internet radio services), it's probably going to be less obvious, so keep that in mind. But with a VBR MP3 or a FLAC file played at moderately high volume, you're going to hear it.

In summary, HTC's "amazing sound" marketing is at best a stretch, and at worst, outright misleading in regard to the Tegra 3 One X. Just saying it doesn't make it true, guys. Chock up another point for the Galaxy S III in the (international) superphone battle.

[Review] Zombies, Run! Is A Fantastic App, As Long As You Like Working Out More Than You Like ...

Google Device Play Store Gets A Subtle Design Tweak Ahead Of I/O, No Longer Wastes Space With ...