For those of you too young to remember, or those just too cool to watch one of the landmark geek films of the 1980s, War Games is a movie about an artificial intelligence that plays a war game with real nuclear weapons. The humans don't know this, of course, but things get real very fast once they figure it out. The movie is a little dated now, but that doesn't stop the new official War Games puzzle game from being a blast to play.

WarGames is a strategic puzzler, and I do mean strategic. This is no Tetris or Sudoku - WarGames: WOPR tests your ability to plan ahead and handle complex, multi-layered decisions. You play the role of the War Operation Plan Response, or WOPR for short. WOPR is an AI designed to simulate World War 3 for the US government, and wouldn't you know it, the computer thinks a simulation of global thermonuclear war is best played with real nukes. You play against various characters from the movie in round after round of intense and increasingly complicated tile matching.

Just consider for a moment that you are a person, pretending to be a computer, playing against computer opponents that are pretending to be people from a movie. I think that's just plain fun. If you can defeat your "human" opponent, you move on to the next stage. If not, you have to keep at it until you do. There are over 40 levels to play, and it gets plenty hard after just a few victories. The basics of this game might seem very similar to another popular game called Dungeon Raid, but WarGames has refined the idea in several important ways. 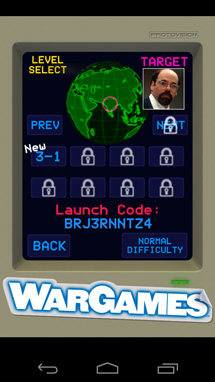 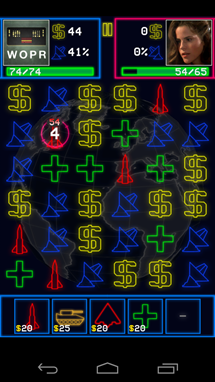 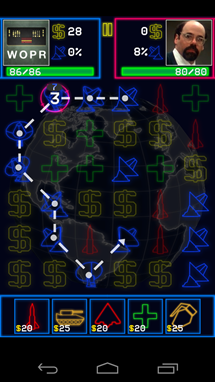 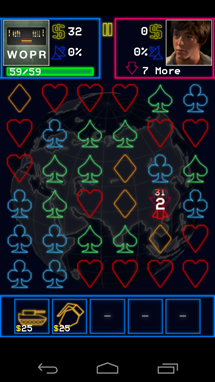 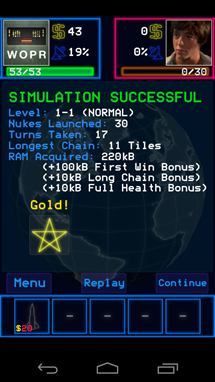 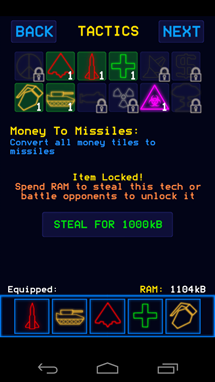 The game board in each stage is a 6x6 square of tiles, each one with a missile, money, radar, or health icon on it. To play, press on one of these tiles, and drag a line connecting as many adjacent matching tiles as possible, You can only complete moves of three or more tiles, though.

Each type of tile triggers a different action in the game, and chaining together more tiles makes that effect more potent. If you match some missiles, each unit becomes a point of damage to your opponent. Health heals you, of course. Radar icons will add up until you collect 100 of them and are awarded a bonus attack right on the spot. Money, obviously, grants you cash to be used on additional special attacks. You're going to quickly see the strategy behind your moves. Maybe you should save those missiles for a few turns, or grab the radars now so you can get that special attack before it's too late.

Cleared tiles will drop off the screen, allowing more to fall in from above. Some of these tiles will be enemy tiles. Each one has a value (for example, how much damage the enemy missile will do) and the number of turns before it is deployed. By chaining these together with like items, you can take them out, or at least weaken them before launch. Later in the game, the enemy gets more tiles like health and bombers. You even get the occasional break with a poker mini-game; a very nice touch.

WarGames would get awfully boring if all you did was match icons all day. The upgrade system is easy to understand, and adds an entirely new layer to the game. After each victory, you get a small allotment of RAM, which can be expended to buy upgrades (remember you're a computer). Upgrades are unlocked for purchase at 250Kb, or you can steal any future upgrade for 100Kb. Additional scratch can be spent to upgrade each power. I really like this more open system.

There are two types of upgrades to be bought: tactics and Mods. A tactic is a power that you can call upon any time you like, provided you have enough money. Mods are passive abilities that are always on. Some of the tactics at your disposal include bombers that directly damage the enemy's health, tanks that destroy a row of tiles and damage enemy tiles, and missile extraction to launch all missiles on the board at the opponent.

Mods are more subtle, but usually kick in when you clear a long chain by giving you random tactics tiles, or changing the drop rate of enemy tiles. There is even one that makes all your tactics cheaper to use. This all works very well with the rest of the game.

The interface in WarGames for Android is a little more colorful than the monochrome video output Matthew Broderick's character was staring at in the film, but it still has that 80s vibe. The tiles are basic shapes, and the spinning globe in the background has a real pixel-art feel. I like that the non-matching tiles fade out when you start swiping as well. The game has little in the way of graphical options, but you can turn the fake scan lines on or off. 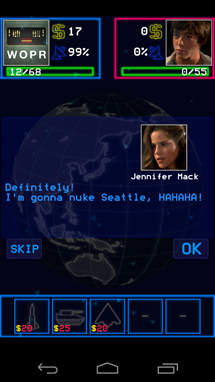 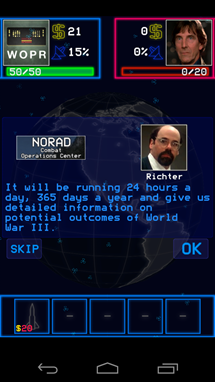 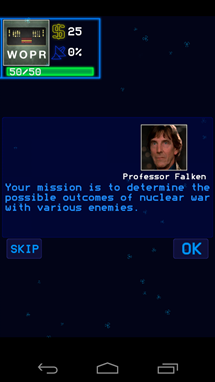 The entire interface is supposed to look like it's running on an old PC monitor, but you're really only reminded of that when you go into the menu. Overall, the fonts, the scan lines, and the shapes used make the retro thing work. My only graphical complaint is that the game doesn't quite fill the screen vertically, having been ported from iOS.

The sound is similarly classic, with that harsh computer generated voice and the 80s arcade sounds when you make a move. I get almost giddy when WarGames asks me in the WOPR voice at each start up if I would like to play a game.  Of course I would!

WarGames: WOPR is absolutely fantastic. The matching gameplay mechanic is solid on its own, but the addition of the upgrades and special attacks makes it an incredibly compelling experience. The difficulty ramps up, make no mistake there. But the balance feels about right throughout. You have to carefully consider how best to proceed at each juncture, and the longer you play, the less room there is for error.

I might go so far to say that this is the best puzzle game I've played on Android, but I know at least some of my affection is unfairly based on the nerdy subject matter, which I find delightful. Still, I've been playing out WarGames puzzles in my head ever since I picked it up. That really says something. For just $0.99, buy it. Here Is The Winner Of The Android Police Logo Design Contest (Bonus: 15 Runners-Up)

Google TV Site Has Been Completely Overhauled, Shows Off All The New Google TV Hotness