The screen may be the real headline feature with the Infinity, but it's not the only one worthy of note. It's still powered by NVIDIA's Tegra 3 "4-PLUS-1" CPU, but it's a newer revision that packs a little more punch. The RAM, too, has seen an upgrade, and the screen is now protected by Gorilla Glass 2. The body retains many of the styling features of its predecessor, the Transformer Prime (TF201), yet it's gained a plastic bar across the top in order to remedy the Wi-Fi and GPS issues that plagued the Prime.

So on paper, we've got more power driving a lot more pixels, and a major flaw that's been fixed. What other changes have been made from the TF201, and what flaws remain - or cropped up in the interim? Read on to find out. 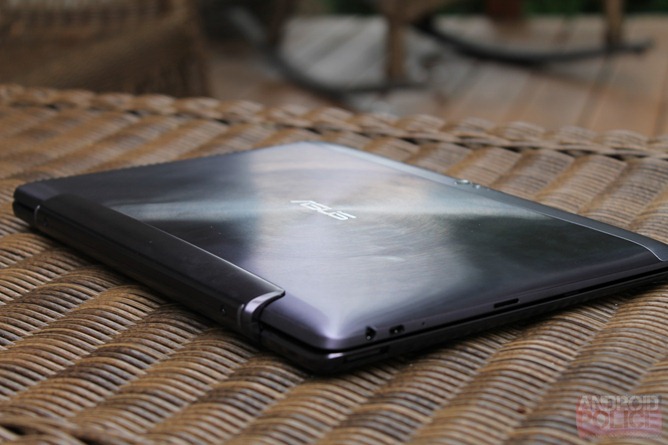 In A Nutshell: well, they took the best tablet available and gave it a better screen, more power, and fixed the GPS/Wi-Fi. What do you think?

You Should Buy It If: you're in the market for an Android tablet and can afford it. You'd be hard pressed to find a better choice.

When I reviewed the Transformer Prime way back in December 2011, I remarked on just how high-quality and sturdy it was. The aluminum chassis combined with light weight inspired more confidence than many of the plastic and/or heavier tablets available at the time, and the lack of give at any edges completed the feeling of quality. The Infinity is very similar to the Prime, and save for the plastic bar across the top, the two would be physically indistinguishable at a glance.

Look closely though, and you'll see the differences. Obviously the plastic on the top is a dead giveaway, but there are other clues. The Infinity is flatter across the back and has more angular sides versus the much more tapered (and virtually side-less) Prime. The Infinity is thicker by a hair (.01") and heavier by a hair (.03 lbs.) Some of the ports and buttons are in slightly different spots, as well. Realistically, the difference on both sides is so negligible you probably won't notice. 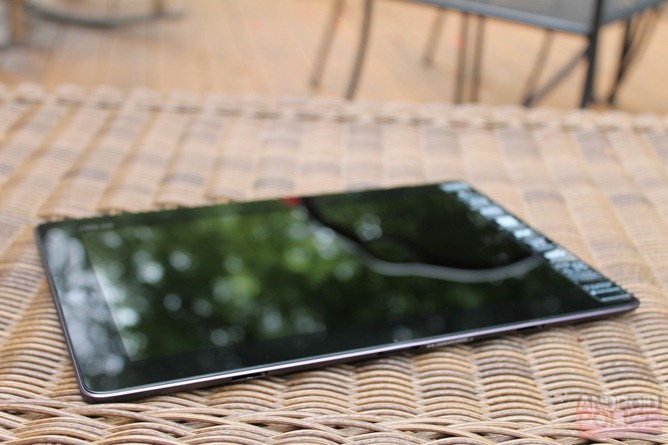 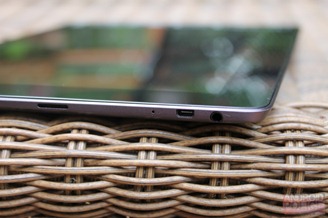 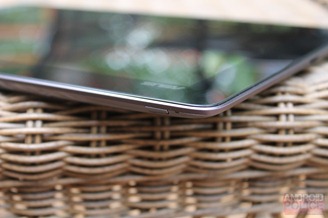 There are three causes for concern, though. First, the Prime felt great initially but the build on the dock began deteriorating after just a few weeks of heavy use. It's not a disaster and the pad itself still feels good, but it's hard not to factor that into consideration with the Infinity. You've been warned: the build is good now, but how well it holds up has yet to be seen.

Second, as with the Prime, the aluminum back is so stupidly scratch- and smudge-prone that it's embarrassing. Within 10 minutes of pulling it out of the box, there was a noticeable scratch in the back from God-knows-what. That was just the tip of the iceberg, as you can see by the photos throughout this review. Granted, it's a purely aesthetic complaint, but a substantial one nonetheless. 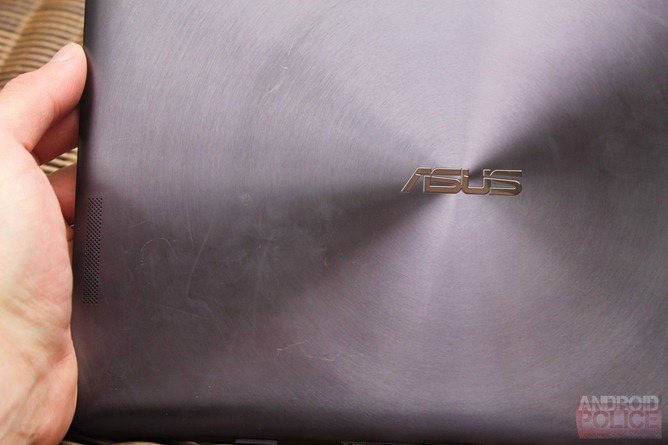 Full-size the above to see the scratches.

The third problem is a three-peat. I complained about it in the Prime review: "Only one speaker, placed in what is quite possibly the worst spot imaginable. It's almost as if they sat down and said, 'What's the stupidest place to put a speaker?' and then put it there." It was also a problem with the TF300: "As with the Prime, the speaker is on the back.  Which means that everyone who isn't you will be able to attest to the sound quality." I really don't feel the need to rephrase it a third time, so I'll just say what the hell, Asus? Stop pointing the speaker in the wrong direction. 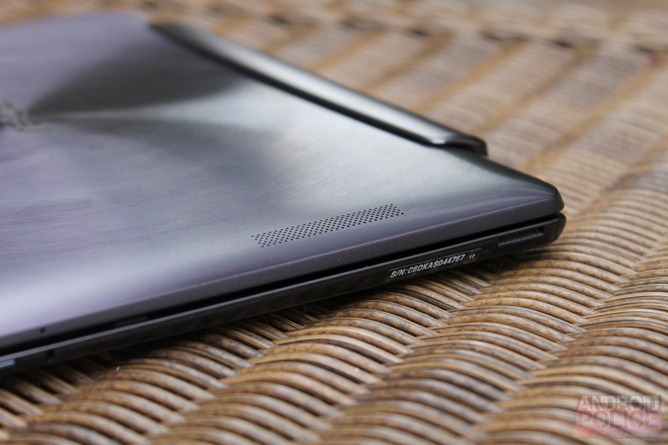 Those three issues aside, the Infinity is sleek, thin, light, and a pleasure to hold and use even for extended periods. Frankly, I find the less tapered back to be marginally more comfortable to hold than the Prime. In fact, the only real issue is the speaker placement, and by now I'm so used to cupping my hand behind the speaker to reflect sound in that I half think it's perfectly normal behavior. 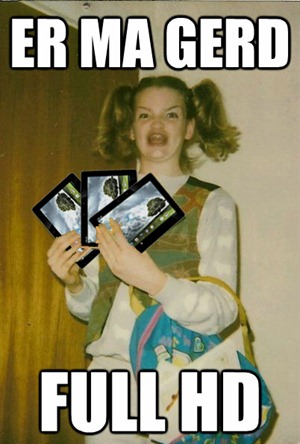 If this image was to scale, this girl would be Hagrid's daughter.

The display is really the highlight of the show here, and as mentioned in the intro, there are a ton of pixels packed into a relatively small screen - more than twice as many as in the TF201, in fact. But as demonstrated in the past by, shall we say "alternative" display technologies, a high pixel count doesn't always equal a good image. Thankfully, it appears Asus cut no corners with the display of the TF700 - the display is absolutely stunning, and arguably on par with that of the best-in-class HTC One X despite a lower DPI.

At 1920x1200, the picture is incredibly sharp and colors are beautiful and accurate - basically, it's plain gorgeous and I have no complaints in that department. Black levels are certainly good, but they're nothing special. Brightness, especially when using Super IPS+ mode, is outstanding - so bright, in fact, that you can use it outdoors in bright sunlight (that said, automatic brightness sucks terrifically). 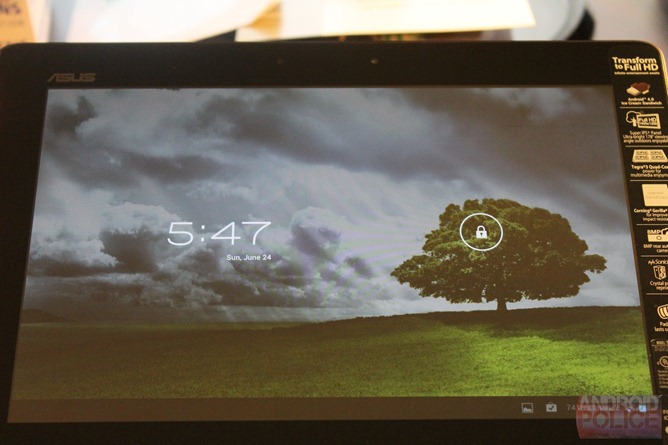 I present to you: automatic (not-)brightness.

It's not perfect though - whether because of the Gorilla Glass 2 or because of some coating Asus puts on, the display is highly reflective and insanely prone to smudges. While viewing angles are technically good, they're more or less ruined in any well-lit situation because of the reflections. Unfortunately, there's also some light bleed - though thankfully it's only noticeable when the screen is black around the edges. And while Super IPS+ mode turns the brightness up to 11, it also zaps the battery, and even in medium-lighting situations the reflection/glare is just horrendous without it.

So, all told: 90% of the time the display is simply stunning. 10% of the time you'll be too busy using it as a mirror for whatever purposes to notice just how stunning it is.

None of the newer (Tegra 3-based) Transformers are particularly porky, but as with the TF201, the TF700's dock is quite svelte. Especially at the bottom (where your wrists sit), it almost feels like your wrists are on the table (or your lap) when you're using it. That's partially because it's just that thin at the end, and partially because the taper brings it to a point that seemingly melds into whatever surface you're on. 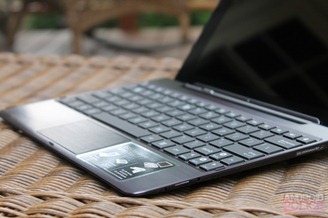 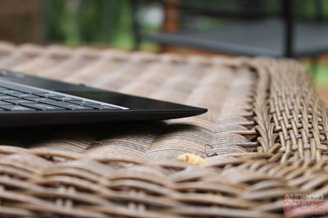 Thankfully, the thin profile doesn't detract from the typing experience, and the keys feel great. They keypad is nice and smooth and the clickpad adequately... clicky. All that said, Asus still hasn't fixed the touchpad issue. Ever since the original Transformer, it's almost impossible to use the keyboard without brushing against the touchpad and causing the pointer to move and click elsewhere. The only solution is to disable the touchpad using the hotkey on the keyboard. I've owned all 4 Transformers, and on all 4, I've ended up just leaving it permanently disabled. Having an entire aspect of the dock be so flawed that it's basically forgotten and unused is bad; letting it go on for 4 iterations is unforgivable.

The T33 chip paired with DDR3 RAM absolutely flies. Despite the fact that it has to drive more than twice as many pixels, performance actually feels better than on any other tablet I've ever used, bar none. The benchmarks seem to reinforce the impressive real-world performance: 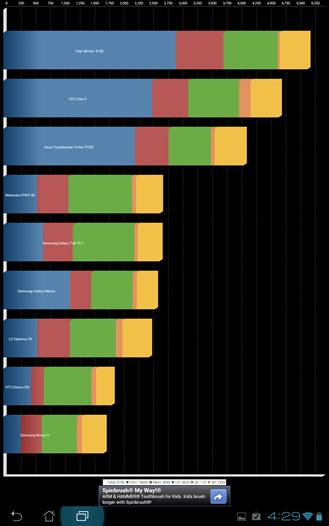 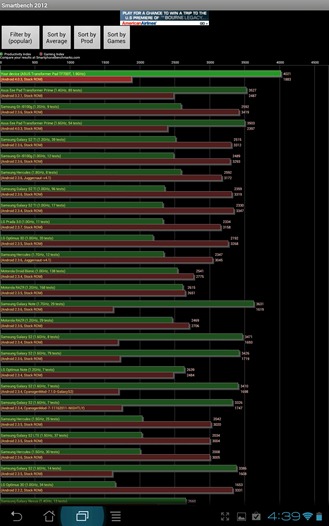 Asus and NVIDIA claim that the T33 chip clocks up to 1.7GHz for one core or 1.6GHz for 2-4 cores (versus 1.4GHz and 1.3GHz respectively on the TF201), yet Smartbench reported the TF700 hit 1.9GHz. Then again, it also somehow reported that gaming performance was worse than that of the Prime despite the higher clocks, so maybe it's just losing its touch.

Even in balanced mode performance was outstanding at all times, and with a mix of performance and balanced (... okay, mostly performance), battery life was around 8 hours of heavy use undocked. Substantial power savings can be had by using power saver mode and/or lowering the brightness. The dock's battery has been downsized a bit by 2.5Wh, but in the real world, that should only result in maybe 45 minutes less life. Frankly, 8 hours undocked is plenty, let alone the 12+ offered by docking. 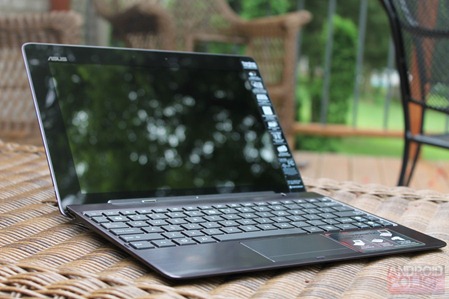 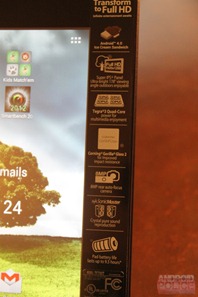 Finally, any connectivity concerns experienced with the Prime have been alleviated by the plastic strip along the top of the tablet. Thankfully, both Wi-Fi and GPS work like charms.

One of the things I've noticed about Asus with the TF101 -> TF201 -> TF700? They're really good at fixing (most of) the things and not screwing with the stuff that's already good. Unfortunately, they've neglected two pretty annoying things: the trackpad and the speaker. The trackpad is an easy fix, and it's irritating that they have yet to do so. The speaker is a much bigger issue, exaggerated by the fact that the company consistently advertises the sound quality. 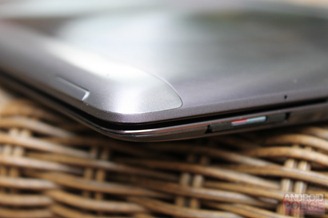 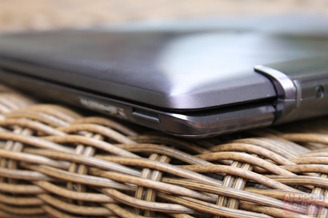 Those two persistent problems aside, the Transformer Pad Infinity is undoubtedly the best tablet the company's released to date. It's also backed by a company that has shown amazing dedication to keeping their product up to date - they're quick to release software and Android updates. In light of the upcoming LTE variant of the tablet, it's also worth mentioning that the Wi-Fi variant will receive updates much more quickly thanks to the lack of carrier "modifications." 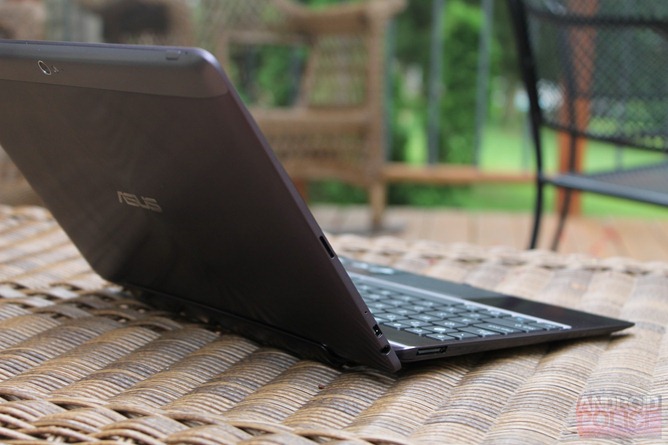 If you're considering purchasing an Android tablet today, it's a crowded - but finally mature - market. Even looking only at Asus, the company will be offering the TF700, TF201 (slotting below the 700 once it's up to speed), and TF300 (lowest rung), and that's without mentioning the LTE/S4 variant(s). If you're a consumer, it's a great market to be in. And if you can afford to spring for the Infinity, it's a great device that's got the power, screen, build, and dimensions to make sure it stays competitive for the near future.