Pinterest, everybody's favorite...umm...thing. That you share stuff on. By pinning things to...okay, look I don't really understand Pinterest. But some of you guys do and that's great! I love it when people enjoy things! It makes them happy! And soon, you can enjoy Pinterest on Android! And be happy! Then you can pin your happiness to something. I think.

Eagle-eyed gadget site from the future Australia, Ausdroid, noticed that among the list of exhibitors in the official Google I/O app is Pinterest, Inc. The company's profile in the app says the app is "Now available for Android." For those who like to do their own personal confirmation, the listing can be found under Explore > Android > Sandbox > Pinterest. Or you can take a look at a screenshot. A-like so: 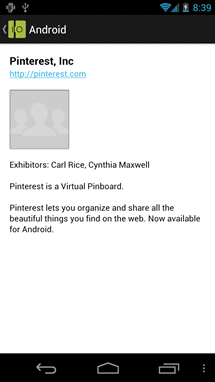 Of course, a quick search of the Google Play Store confirms that this app is not, in fact, available for Android now. However, the company's presence at Google I/O would lead us to believe that the official app will be launching during Google's Devstravaganza* later this week. Only time will tell, but if you've been waiting to get your Pinterest fix on your Android phone, sit tight. It looks like you won't be waiting much longer.

Update: A Pinterest spokesperson reached out to us to let us know that, no, Pinterest won't be launching at I/O after all. Here's the full quote:

“We're excited about the Android platform and are working hard on building a great app. However, we don't have plans to announce anything @ I/O.”

So, at the very least, for those of you eagerly awaiting this app, the company is working on it. You'll just be waiting a bit longer than we thought.

* This has been your Horrible Portmanteau of the Day.

[Weekend Poll] Do You Regularly Rent Movies Through Google Play?