Prev
Posts in the last
24 Hours
sorted by
Hottest
Next
Update: Verizon just posted on its official blog that the rollout is slated to begin today, June 22.

Verizon has just uploaded the official support documents for the RAZR / RAZR MAXX Ice Cream Sandwich update (which by the way will be build 6.16.211 – the same build that recently leaked). With the docs going live just moments ago, users should expect the update to officially start rolling out any day now.

The update, besides upgrading your device to Android 4.0.4 (including many of the features we've come to love like folder creation, data usage, etc), brings global roaming, improved Bluetooth audio quality for music enjoyment, and other various other improvements to Verizon apps and basic phone functions. 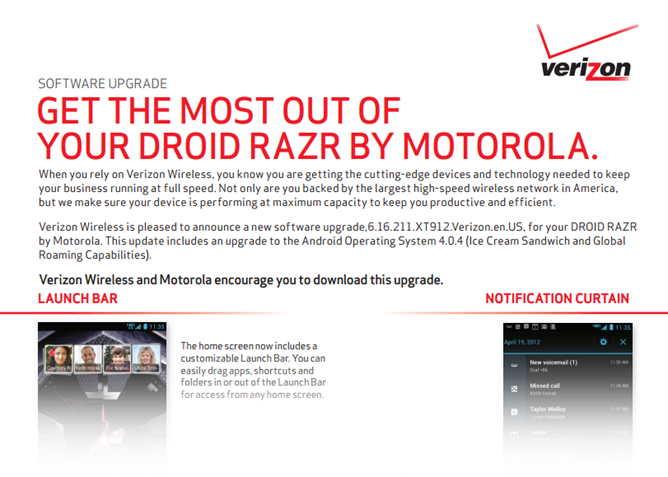 As always, those wishing to check for the update manually need only hit Menu > Settings > About Phone > System updates > Download. From there, you'll be prompted to download the update.

For more info about the update (and how to get it) check out Verizon's support docs here.