It was less than two months ago that the Galaxy S III was first announced to the world at Samsung's super classy special event. Now, the device is available inside the US borders. Though, there are a few catches. For starters, the device is only available on T-Mobile so far, according to a press release from Samsung. You can order it online, or from "select retail stores." This is in line with T-Mobile's previous statements where the company announced it would be splitting the launch in twain.

The other carriers' availability is a little murky. According to Samsung's official press release, the device will become available "in-store and online within the next several weeks." It's unclear when any of the carriers will have the device available in stores. AT&T issued a statement saying that customers who pre-ordered would not receive the device on June 21st (read: today) as they were previously told, but should now expect their order "no later than Monday June 25th." Here's the full statement, via The Verge:

Manufacturer supply constraints of the 4G LTE Samsung Galaxy S III have caused a delay to expected pre-order shipments. Customers who were previously quoted a delivery date of June 21st should now expect their device to arrive no later than Monday, June 25th. We currently estimate future pre-orders to arrive within 10 business days based on available supply. Impacted customers will receive both an SMS and email notifying them of this change.

Meanwhile, Sprint announced a couple days ago that while its shipments were also delayed, the SGSIII would be available via "Web Sales and Telesales." The former, at least, hasn't happened. Currently, if you try to order a Galaxy S III from Sprint, you will be told that pre-orders are closed and the device is out of stock. Sprint also said it is "optimistic" that those who pre-ordered their phone will receive it on time, however there's a chance they might receive it a day or two late. Beyond that, no launch date has been given.

As for Verizon, the company only has the device available for pre-order. We haven't heard from the company about whether or not the device has been delayed. Shipping dates for the device have simply changed on the company's site with no explanation. Previously, the ship date had been moved back to July 10th, although now if you go to Verizon's pre-order page for the device, it lists July 11th as the ship-by date. 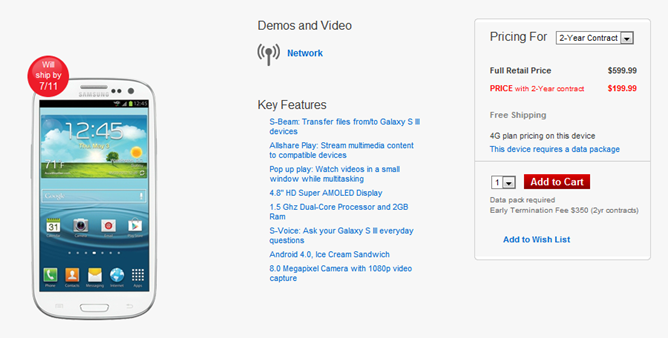 Suffice to say, this launch is a bit all over the place. Within a month, and with a bit of luck, hopefully all carriers will have the new hotness available via all outlets, but with a device this popular, and especially since the LTE versions are a unique variant not sold in much of the world, it's not surprising that shipments have been this delayed.

If any of you, our lovely readers, receive your pre-orders, let us know in the comments! In the meantime, don't let the wait make you too crazy. Lord knows I'm on the edge of my seat.

NEW YORK--(BUSINESS WIRE)--The Samsung Galaxy S® III has officially launched in the U.S. The premium content sharing smartphone is available online starting today on T-Mobile’s Web site and in select retail stores. AT&T, Sprint, Verizon Wireless and U.S. Cellular will have the Galaxy S III in-store and online within the next several weeks.

The Galaxy S III celebration kicked off in New York City last night with a star-studded event hosted by actress Ashley Greene. Five hundred Samsung fans were granted access to an experiential event held at Skylight Studios in the trendy SoHo district to test drive the sharing capabilities of the Galaxy S III, get their picture taken with NBA stars Steve Nash, Kevin Love and Stephen Curry and share those once-in-a-lifetime experiences thanks to the Galaxy S III. Capping the night off was a special surprise performance by Skrillex.

Taking its inspiration from nature, Samsung Mobile designed the Galaxy S III features to respond intuitively and naturally to human use and interaction. It balances ergonomics with intuitive use so that the device becomes an extension of the user. To celebrate the launch of the Galaxy S III, Samsung Telecommunications America will donate $1.5 million to benefit the World Wildlife Fund (www.wwf.org), which strives to build a future in which people live in harmony with nature. Samsung fans can share with the world which animal species they love by voting at www.facebook.com/samsungmobileusa and at the various launch events being hosted June 20-22. Samsung will announce the donation on its Facebook page and tap into its community of nearly 7 million fans on Facebook.com/samsungmobileusa to help raise awareness of the WWF initiatives with posts throughout the week.

The launch of the Galaxy S III is being supported by the largest and most innovative marketing and advertising campaign ever conducted in the U.S. by Samsung Mobile. The campaign leverages technology to engage consumers in new and interactive ways and reward Galaxy S III owners.

“Once again, we are putting the ‘Next Big Thing’ in consumers’ hands. The Galaxy S III introduces a completely new way of sharing and socializing that no other mobile phone can,” said Dale Sohn, president of Samsung Telecommunications.

About The Galaxy S III

The sharing services and capabilities of the Galaxy S III connect people to the experiences and content that influence their daily lives. This smartphone harnesses the potential of Samsung’s diverse ecosystem of consumer electronics by enabling sharing of content with multiple devices, among large groups or with another device. The process of pairing the Galaxy S III for these sharing services takes little to no set up.

The Galaxy S III creates a true industry first by delivering the same design and user experience across the carrier variants while also offering the customized services of each of the five U.S. carriers. Design highlights include:

A host of premium Galaxy S III accessories, including convenient docking options, convergence solutions and an array of colorful cases and covers, will be available for all Galaxy S III smartphones.

Available in the coming weeks: