Many users, upon booting up their brand new EVO LTEs over the past few weeks, were confused to find that Google Wallet would stick in the "adding prepaid card" dialogue, often returning an error message which encouraged users to try again later. It soon became apparent that this issue was limited to the EVO LTE, as it was discovered that modifying the device's build.prop to identify as a Galaxy Nexus returned the app to full functionality.

A few days ago, though, Wallet began telling EVO LTE users that "Google Wallet has not yet been certified in your country or on your device / carrier," locking users out of the app entirely, leading to frustration, confusion, and (of course) rumors regarding the meaning of the app's shifty behavior. 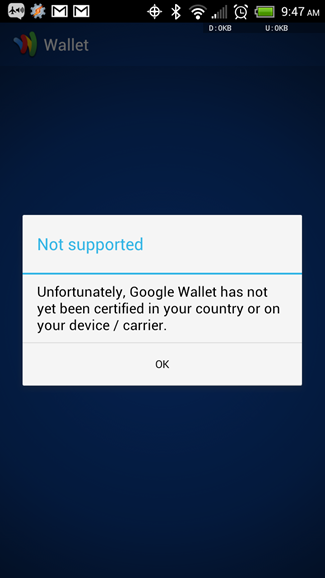 Rumor has it that Google is working on a "fix" for Wallet on the EVO, and has locked the app in the meantime. This could well be the case, as there isn't exactly concrete evidence to point toward Sprint's rumored "Touch" payment solution as the culprit (as other rumors would suggest). And after all, a message indicating that the EVO is not supported by Wallet at all is – if ever so slightly – less confusing than an endless "adding card" dialogue.

For now, no one knows exactly why Wallet won't play nice with the EVO LTE, but we have reached out to Google and will keep this post updated pending a response. Until then, interested users can keep an eye on the discussions over at XDA, a few of which are linked below.

XP Mod Is A Custom Launcher That Hearkens Back To A Simpler, Less Modal Time