Have you been annoyed by the "SmartSync" battery-saving feature found on HTC's newest phones? If you're not familiar with this aspect of Sense 4.0, that might make, well, sense. HTC has been fairly quiet about how exactly its battery optimizations in Sense work, but SmartSync is a big part of it, especially when it comes to saving juice overnight.

All Sense 4 phones (HTC One X, XL, S, V and EVO 4G LTE) utilize this feature to reduce battery consumption in the wee-hours, specifically from 12AM to 7AM. After 15 minutes of inactivity (no emails, screen off, etc.) in this time frame, Sense 4 phones go into "SmartSync" mode - deactivating all data connections and turning off sync. This means that unless you actually turn on the screen or otherwise interact with the phone during those hours, none of your apps or services (aside from phone calls and SMS/MMS) will be able to update or send/receive data.

Personally, I've never found it too annoying (especially because I usually forget to mute my phone before bed), but I can see the gripe people have about not being able to toggle this fairly aggressive power-saving feature in the first place. Now, there's a way. A clever XDA developer (J4N87) has come up with a simple, app-based solution that requires no root or unlocking - just install, hit the toggle, and reboot your phone. 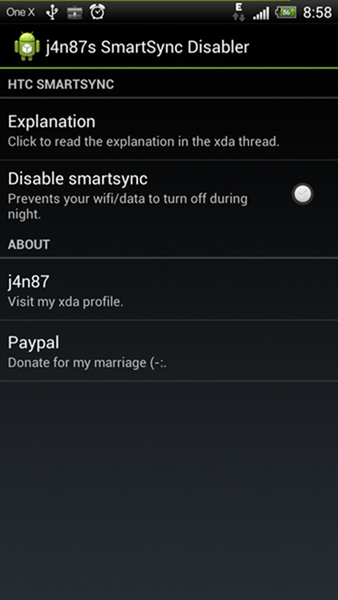 The app is bare bones, with a single "Disable smartsync" checkbox. To get it, head over to the Play Store now (and feel free to grab the "Donate" version - developers deserve a little love).

HTC Knows The One X Has A Hardware Wi-Fi Problem, Has Fixed Issue In Production

XP Mod Is A Custom Launcher That Hearkens Back To A Simpler, Less Modal Time