With the introduction of Draw Something's "fresh new look!" update a couple of days ago came many design changes, not all of them entirely great. Just for fun, I decided to take a shot at making Draw Something's design slightly "fresher," or at least slightly more sensible. Just like my last design critique, I'll start by taking a look at what issues the current design has, and then make a few suggestions (with some quick mockups) as to what I think could be improved.

To be completely fair, Draw Something's new look isn't terrible. It's just not what it could be. Where the old UI was light, loose, and open, the new look is considerably tighter, and somewhat less sensible. Likewise, some features that lived on from the old design still don't make sense. 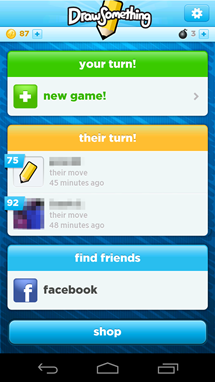 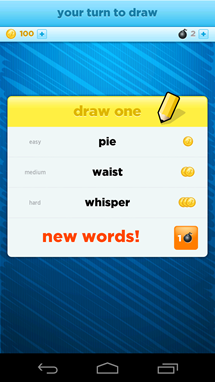 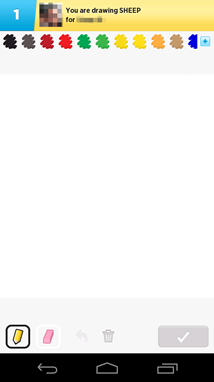 Besides the UI's overall "vibe," there are several details that cause some trouble. The first of these are on the home screen. To start with, the "add coins" and "add bombs" elements are teeny tiny. This wouldn't necessarily be an issue given the large header bar that users can safely touch, except that above the bombs button is the menu button.  Next, the backdrop for the entire app has received what appear to be vertical scan-lines which serve, as far as I can tell, no purpose. While they're harmless to the app's functionality, they make the otherwise fun scribble background seem chaotic and distracting.

Another issue is the "find friends" block. In my mind, the "new game" button should provide users the chance to find friends via Facebook and Twitter, or integrate the respective accounts if they haven't been already. The presence of a "find friends" block only provides redundant functionality and can safely be eliminated.

One other gripe, though minor, is the drop shadow at the lower right corner of the "their turn" element. This is a very small complaint, but is still a problem that could easily be resolved.

Perhaps the most notable flaws (besides those on the home screen) lie in the "draw" interface. While nothing is inherently dysfunctional about its design, the draw screen could be better. The pencil and eraser icons do nothing to indicate what size brush the user is drawing with, and the canvas-paint and canvas-tools spacing leaves a lot of underused space on the screen.

The "your turn to draw" screen, while not totally inconsistent with the rest of the app, introduces yet more colors and a new bomb icon present nowhere else in the app.

What Can Be Done

As with any other app, I posit that a quick and easy solution to design issues is a move toward internal consistency. An app in need of design help usually needs – among other things – a shot of consistency not only in colors but interface arrangement. Something else that invariably helps is adherence to the idea that less is more. A more open, less chaotic approach offers major improvements in many cases.

Before continuing with my own vision of how to tweak Draw Something's interface, I'll reiterate that these mockups are not meant to be a final product, just a handy example of how my ideas might look in action. That being said, here's my idea for Draw Something's home screen: 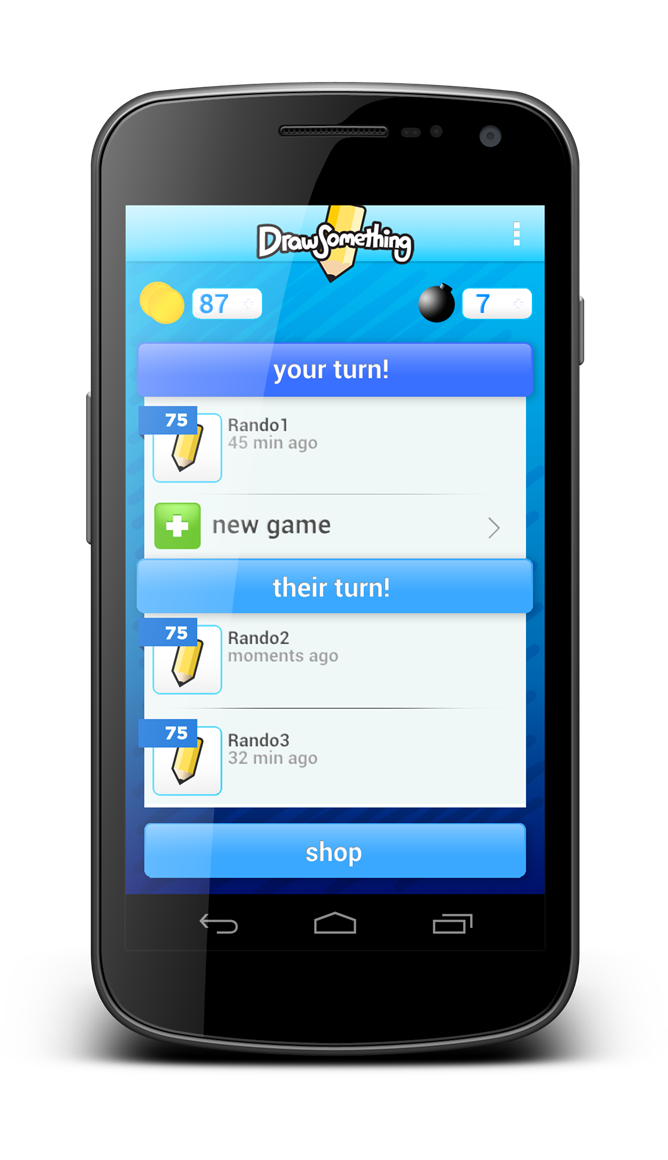 No stray gradients, no redundancy, more color consistency, a simpler background, and amply-sized coins and bombs buttons. Furthermore, extraneous colors have been reduced to a minimum, leaving a simple blue color scheme to the home page with a minor allowance for the "new game" button which now takes over the "find friends" button's functionality. Finally, though DS' "swipe to end game" functionality is invisible and perhaps hard to figure out for new users, I think the trade off between ambiguity and accidentally deleted games is a fair one, and intentionally avoided adding an "end game" button to the home screen.

Now, on to the "your turn to draw" screen: 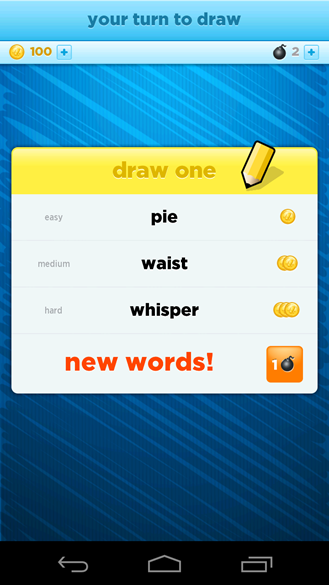 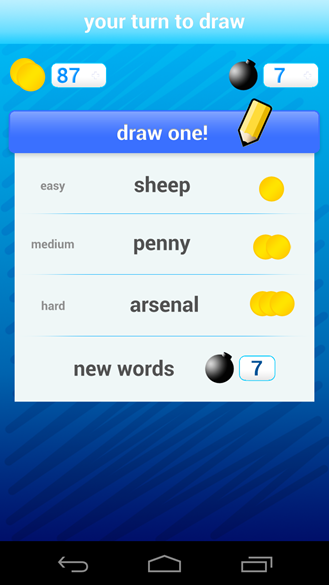 The changes here, as you can see, are relatively minor. The biggest change is a switch to an interface consistent with the openness of the home screen with less eye-popping colors but an equally functional arrangement. Once again, the coins and bombs buttons have been redone, not because of conflict with the header bar, but to keep things consistent. The "easy," "medium," and "hard" descriptors have been upsized from their tiny counterparts for ease of use. Finally, we'll take a quick look at the "drawing" screen. 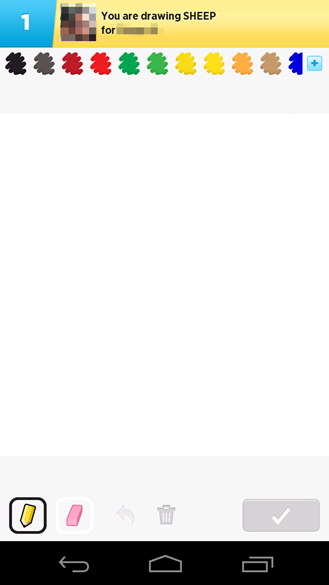 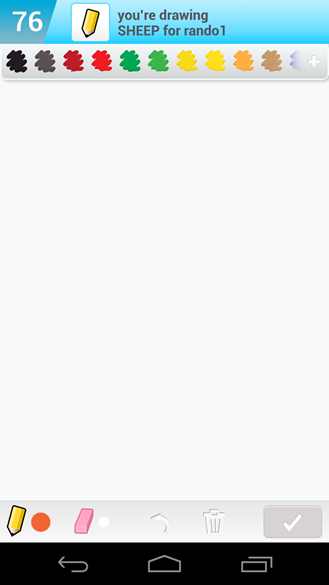 The most important distinction here is not the addition of drawing space, but the change in pencil/eraser functionality. In my vision, the pencil would show users not only what color they're working with, but also the brush size. I can't count how many time's I've started drawing with the intention of detail, only to unwittingly end up with a gigantic brush. This is a small complaint, but one simple design change could end those woes forever. Likewise, the eraser tool now indicates size, so users will know how much they're about to erase. The undo and trash icons are just fine, though I added some contrast between these icons and the background for a little more visibility. The color options have also been placed in their own discreet container, with a more subtle "add colors" button and more visually pleasing gradient to indicate that users can swipe to reveal the rest of the palette. Finally, the header bar has been altered to fall into the rest of the app's blue color scheme.

Overall, Draw Something's design already does what it's supposed to do, but that by no means indicates that it's perfect. In my opinion, the tweaks discussed above could make a world of difference not only in its overall appearance, but its functionality and ease of use. My renderings are not meant to show the pinnacle of social game design, but rather a proof-of-concept collection illustrating the kind of design features that may help in making Draw Something an even easier game to enjoy.

Google Is Giving Away Ugly Ties For Father's Day (Among Other Virtual Crap) - No, I'm Not Kidding