If you own a tablet, then you probably realize a good tablet stand is clutch. The thing is, though, there are so many stands on the market, it's almost impossible to find exactly what you want. Personally, I want something as minimal as possible, functional, offers a variety of viewing angles, and doesn't take up a lot of room in my bag. Enter the Arkon Desk & Travel Stand for Tablets.

As you can see, this stand is not only extremely compact, but equally as versatile. I've spend the last few weeks using this stand, and I have to say that the overall quality of the product has left me impressed; in fact, it actually surprised me in ways that I didn't expect.

Where can I get it? Arkon or Amazon 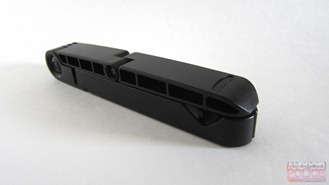 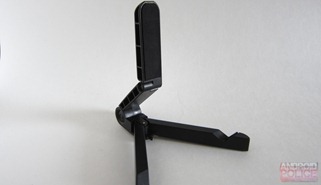 While the Arkon tablet stand is simple in construction, its design is also well thought-out. The moving parts are nothing more than interconnecting grooved bits of plastic held together by screws, which I really like. This gives the stand very defined positions, and essentially "locks" it into place (it's not going to move without a fair bit of force). Of course, with enough use, the plastic teeth will wear down, which will prevent the stand from working at all. Still, it should last several months (if not longer) before beginning to wear down; but at less than $8 (from Amazon), it's won't break the bank when the time comes to replace it.

I love the fact that the upper part of the stand is also hinged, as it allows for the maximum number of viewing angles while still offering good support for your device. The back the arm is covered in a padded non-slip material, which keeps the tablet from sliding. The same material can be found in the grooves where the tablet rests, as well as on the bottom of the legs. This is one area where I was pleasantly surprised: this stand definitely grips the desk like no other that I've ever used. Once the tablet is in the stand, you can tap on it all you want without fear of it sliding around.

The legs of the stand are also thick enough that it lifts the tablet off the table a bit, which is fantastic for devices with bottom-mounted speakers (Toshiba Excite 10, Acer A510, etc.), as it doesn't muffle the sound the way other stands do.

Overall, I think the Arkon Desk & Travel Stand for Tablets is a highly useful and portable stand. Sure, eventually it could wear down and need to be replaced, but it's extremely affordable, so that's really a non-issue. It's a great stand for anyone looking to prop their tablet up: it offers a wide range of viewing angles, excellent grip, and is highly portable.

[New App] Songkick Comes To Android, Creates Concert Calendars Based On Your Music Tastes And ...

iOS Didn't "Stomp Out" Android, And Both Platforms Are Doing Just Fine