If you're fortunate enough to have Ice Cream Sandwich on your smartphone (either officially or unofficially), then you already know that the stock launcher is a huge improvement over previous versions of Android. However, it's not perfect.

Enter my personal favorite third-party launcher for ICS devices: Nova. This isn't the first time that we've mentioned Nova Launcher on AP, but it just received an update that definitely brings some note-worthy enhancements to an already-great application.

While all of the new features are nice to have, the first three really stand out: color themes, icon themes, and widget overlapping. When combined, these three things will bring the ultimate customization experience to your ICS device. 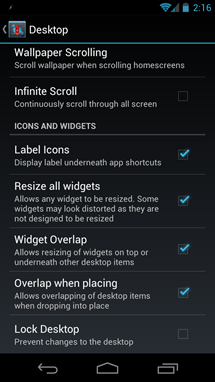 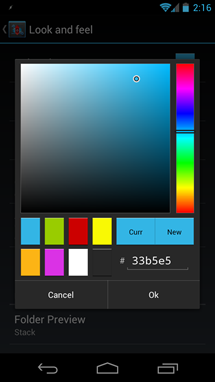 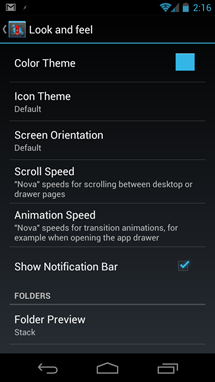 Basically, changing the color theme modifies the color accent throughout the launcher to whatever you like - it won't change colors throughout the rest of the system (like in the notification bar), but it can easily bring a little more pizazz to your homescreen.

Similarly, the icon theme changes, well... your icons. The cool thing about this, is that it supports both ADW and Go Launcher icon packs. Neat.

Finally, we have Widget Overlapping. I used to love this feature on Launcher Pro back in the day, as I used it to create some rather intricate homescreens by overlapping several widgets. Back then, though, it was a major pain, because you had to add widgets in a certain order to get them to layer the way you wanted. Changing your mind about how you wanted it to look meant having to start over. Quite frustrating.

Not with the overlapping feature in Nova, though; now you can easily select whether to send the widget to the top or bottom, which is a godsend for any homescreen modder.

Otherwise, this update brings a handful of other enhancements, like faster widget loading, the ability to lock the desktop, and some overall improvements to the way the launcher works.

This update definitely makes an already-good launcher even better, so hit the widget to check it out (if you haven't already).

[The Android Police Podcast] Episode 13: Too Many Meats In Your Mouth... Turducken