If you haven't heard, Google+ is getting an events feature. "Party at Ron's house, 9pm on Friday, who's coming?" - that sort of thing. News of G+ Events leaked, surprisingly, through Google Calendar. Someone discovered G+ Events code in GCal - Apparently there will be some integration. Sounds plausible.

The Android app, of course, is going to need to support the fancy new events feature too. The other day in our AP chat, Eric pointed out a hidden section in the G+ App's navigation list. The list appears to end after "Local" but there's actually a blank button underneath Local, and tapping on the blank spot it will trigger a button highlight. "Maybe Events isn't far behind Locals?" he said. 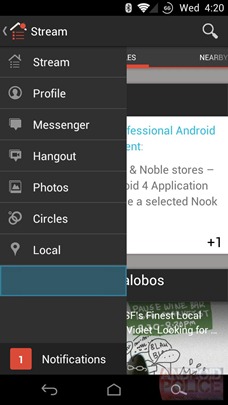 Yes, maybe... I immediately fired up my APK disintegrator and hunted down that blank space. Check it:

Oh yeah. Events code is already shipping in the app. What other Events pieces are in there? 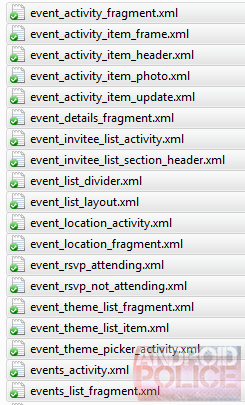 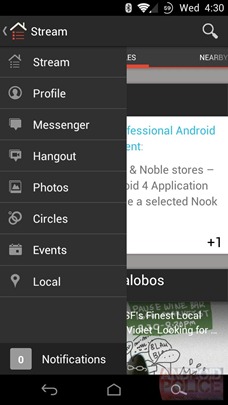 In short: all of them. It's hard to tell without knowing the final feature set, but it looks like they could launch events tomorrow if they wanted. You got all the icons you need and miles and miles of layout code. I'm even confident enough to make a few mockups. The picture on the right is Photoshop, but the end product should look exactly like that. The code for the "switcher" (the navigation list) puts Events in between Circles and Local, add the supplied "nav" icon and some Roboto and you've got a pretty good facsimile. Isn't this fun?

We can do the action bar too:

There's Events' action bar logo, and the action bar layout should be New Event, Refresh, and Overflow (with stuff like Search in it). The first screen (or at least, one of the screens) has a two tab layout with "Upcoming" and "Past" events.

The really crazy stuff pops up when you start digging some more and find stuff relating to "Event Themes." Wait.. what?

Yeah. Event Themes. And this isn't some weird,  tacked-on feature, themes seem like they are going to be a big focus of Events. Consider the layout of the Edit Event screen: the very first items are for theme selection, then the event name, time, location, etc. An events app's primary function should be 'what and where,' yet "themes" is given top billing in the Edit Event screen.  Just what the heck is going on? What is a theme?

The Edit Event screen has an "Event Theme Image," a TextView called "Select Theme Text" (select?), a "Select Theme Button" that brings up a list, and an "Event Theme Progress Bar" that will pop up when needed. And keep in mind, all of this is above the event name, location, date, and attendees.

And check out these excerpts from strings.xml:

So you have to pick your theme, and they're changeable after the fact. Themes come in 2 flavors: Featured and Patterns, and sometimes there might not be any themes available at all. That strongly implies "themes" is not a static list.

...So are themes downloadable? Is that what this means? It really looks like (that means it's wild speculation time), whatever a theme is, it's user generated, and the good ones are curated under the "Featured" tab. I'll be hosting a theory party in the comments.

Event Photos are pretty interesting. The regular event screen gives you tabs for Details (when, where, who, etc), Activity (which is probably comments and stuff) and Photos. Events have an entire tab dedicated to photos. Does that mean everyone can tag their photos to an event and they will show up there? I don't see any interface to put a photo there. Maybe event names will autocomplete in photo tags, or if Google wants to be really smart, they could auto tag them based on location. I'm just speculating though.

The rest of it looks like pretty standard, yet fully featured, event stuff. You've got attendee lists with avatars, in-line RSVP buttons ("Going" and "Not going", no "Maybe"), comments, notifications, and the ability to invite an entire circle or individual people. Events can be deleted or edited directly from the app, and you'll be able to +1 and check-in to events. It sounds great.

The usual APK hacking disclaimer applies: All code is subject to change until it actually gets released, it might never come out, etc, etc. But it's definitely in there.

Oh, and I found one more little tidbit while I was digging through the G+ APK:

One of these things is not like the others:

Yep. Games. Games will go mobile at some point. I don't have much more for you, the only code is that menu string and, like, 2 notification entries. The plethora of layout code that exists for Events isn't there for Games. So don't expect it for a while.

That's about it for G+. Like I said earlier, Event themes speculation party in the comments. Go!