A key aspect of the power of smartphones is the variety of functions they provide to the user. Data, GPS, Voice, Video, are all found in almost every Android phone on the market. With today's release of on{X} ("on-ex"), Microsoft hopes to exploit this convergence of functionality in a way that is less reliant on the user for input and more aware of its surroundings. By gathering information from the host of sensors available to the operating system, it's quite possible for your phone to determine its location and context and respond accordingly, without intervention by the user. Armed with their trademark lower-case, sans-serif, Holo-breaking Metro style convention, on{X} is Tasker for the everyman.

If the concept sounds familiar, it's because one of Android's classic stand-out applications, Tasker, is built on the same premise. Clearly Microsoft figures that there's room for improvement in this category of device autonomy. Much like Tasker, on{X} hooks into your phone's multiple inputs. Where it differs is rule creation. User-friendliness here seems to be key to the experience. Microsoft wants users of all technical capabilities to use, modify, or create "recipes" for on{X} through simple modifiable phrases, without the need to understand the code behind it. However, should you want more functionality, you will be able to delve into the code itself, and set things exactly how you please.

However, unlike Tasker, it does not appear to be possible to program these rules directly on your phone. Instead, they are created on your PC and then pushed to your phone. A confusing arrangement, considering Microsoft's touting of on{X}'s separation from "the cloud". Perhaps coding on-device will come at a future point, or users may be able do it directly in their phone's browser.

This project is also reminiscent of ifttt, an online automation service that uses simple commands to give common users the powers of automation. Much like on{x}, ifttt uses a simple, natural language method ("if this then that") to perform simple and complex tasks. Microsoft appears to be borrowing a bit from ifttt in this regard.

In on{X}'s introduction post, MS's Eran Yariv expounds the motivation for its creation, and what possibilities it provides. In brief:

While those behind on{X} are obviously aware of the battery implications of this "continuous sensing", their solution is light on details:

"Even better, we are offering the use of the advanced technology we put in the system that is constantly optimizing the power drain on the battery – you simply don’t need to worry about having a hot dead phone in your pocket after only 4 hours of use. " 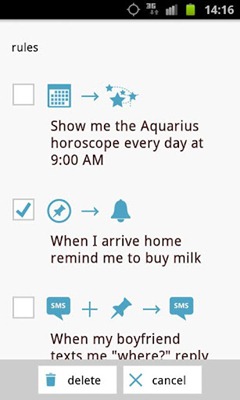 As you would expect with a new project from a large company like Microsoft, there is a wealth of articles and guides already available for on{X}, along with the Android app, fresh on the Play Store.

If you're eager to check out on{X}, head over to the developer blog and take a look at the material there. It's worth pointing out that despite on{X}'s supposed focus on privacy, a Facebook login is required to use the beta.