Acer surprised viewers today with a pair of tablets that were not ushered in even by a humble press release. Engadget reports that the tablets received no formal announcement at Computex either, but that they were only discovered thanks to a wandering eye.

At any rate, the tablets in question are the Iconia Tab A210 and A110 – presumably upgraded versions of the A200 and A100. Each of the tablets has a new design, a Tegra 3 processor, and Ice Cream Sandwich goodness on board. Engadget took some hands-on time with each of the devices, grabbing the photos and videos you see below.

Engadget indicates that the A210 is bound to be a mid-range tablet mainly due to the fact that its specs are largely similar to the A200, and that it lacks a rear camera. Personally, I consider the lack of a rear camera to be a wash – I can count the number of times I've ever used a rear camera on a tablet on one finger. The tablet does have a front-shooter, though, in addition to the quad-core Tegra 3 processor mentioned earlier, a 10.1" 1280x800 display, USB 2.0 port, microSD slot, and 3620mAh battery. The tablet is expected to come in both 8 and 16GB flavors. 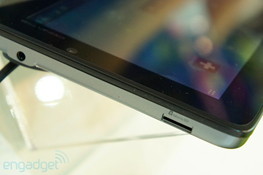 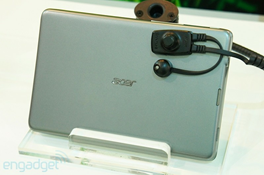 The A110 appears to be a fairly non-descript device, and Engadget deduces that – due to its wide bezels and overall chunky form factor – it will likely be priced to move. The 7" display carries a 1024x600 resolution, while under the hood the A110 packs 1GB RAM, a Tegra 3 processor, and 8GB on-board storage (expandable via microSD). The device also carries microUSB and micro-HDMI ports.

Absolutely nothing is known about when these devices will be available or how much they will cost, but as always, we'll be here with any new details that emerge.