It's never a bad day for a deal. Unless you're already on Verizon, I suppose. If you're not already part of Big Red's teeming masses, you can hop aboard the nation's largest carrier and grab a snazzy new Galaxy Nexus for your trouble from Amazon Wireless for just a penny. If you're already on Verizon and you're just looking to upgrade, the latest pure Google is available to you for $149. 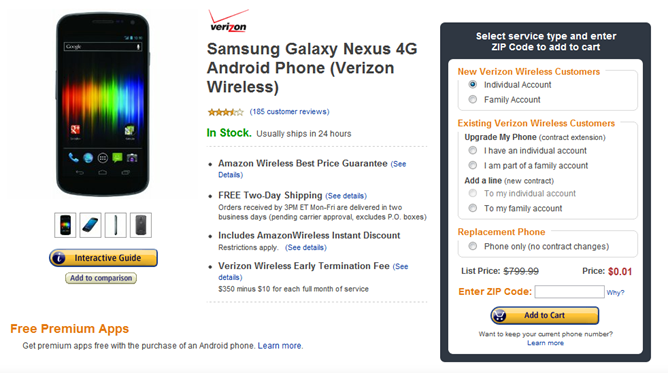 The phone still currently lists for $199 on a two-year contract with Verizon proper, so upgrading users are getting about $50 off, while new customers obviously get the best discount one could hope for: everything off. It's also worth noting that Verizon is rumored to be killing off its double data plans today. While we haven't heard any official confirmation, and Verizon has reinstated its double data promo more often than I make sarcastic jokes, if you're on the fence about signing up today, the safe route would be to do it.

Amazon Wireless is confirming via Twitter that today is the last day of Verizon's double data plans. No excuses left, guys. Hurry up and get on it.