We already know that the Galaxy S III is coming to five major carriers in the U.S., and T-Mobile just dropped all of its plans into the public lap. Here's the skinny.

Aesthetically, this device not only looks identical to the international version, but also like what we've seen from the other U.S carriers thus far. Internally, T-Mo's GSIII will also match the other U.S. variants of the device: 4.8" 720p Super AMOLED HD display, 1.5GHz dual-core Snapdragon S4, 2GB of RAM (!!), and Android 4.0. 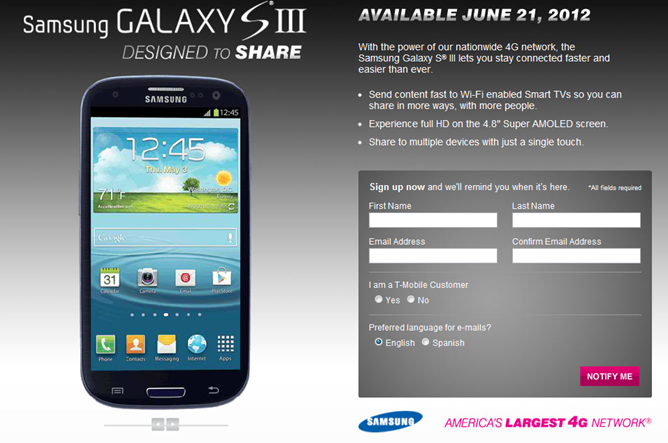 While T-Mobile has yet to release pricing information, we know that it will carry both the Metallic Blue and Ceramic White variants in both 16GB and 32GB models, all of which will be available beginning on June 21st. If, for some crazy reason, you think you may forget what day it's supposed to land, you can hit up T-Mo's GSIII landing page to sign up for updates.

Who's going to be in line?

BELLEVUE, Wash. — June 4, 2012 — T-Mobile USA, Inc., the No. 1 mobile operator brand in Samsung Galaxy S sales, and Samsung Telecommunications America (Samsung Mobile), the No. 1 mobile phone provider in the U.S. and the No. 1 smartphone provider worldwide,1 announced the upcoming release of the highly anticipatedSamsung Galaxy S® III. Starting June 21, T-Mobile® customers will have the opportunity to own one of the most innovative smartphones in the market to date, joining the popular Galaxy S family of devices.

“We have a tremendous history of working with Samsung to bring cutting-edge devices to market, and we know our customers are excited to get their hands on the Galaxy S III,” said Brad Duea, senior vice president, product management, T-Mobile USA. “As we continue to aggressively compete, this device is yet another example of how T-Mobile delivers amazing devices and 4G experiences to our customers.”

· Connecting and Sharing: Imagine shooting a video with a group of friends and being able to share it immediately with others in the group. The Galaxy S III enables group sharing via Wi-Fi Direct™ so that content such as a video or photo on one device can easily be shared with up to five other Galaxy S III devices. That same video or photo can also be viewed by the group on a compatible big screen TV, such as a SmartTV, using  AllShare®. With an advanced 8-megapixel camera with LED flash and zero shutter lag and a 1.9-megapixel front-facing camera, the Galaxy S III will capture beautiful HD videos and photos that are perfect to share.

· Entertainment: Whether waiting for an appointment or commuting on the bus, customers can take in the latest action movie in full HD from Samsung Media Hub or catch their favorite TV show with T-Mobile TV in Mobile HD2. Images appear crisp and clear on the Galaxy S III’s 4.8-inch HD Super AMOLED screen, bringing entertainment to life on the device. In addition, customers can choose between 16 GB or 32 GB of internal memory, and have the option for expandable memory via a MicroSD slot, providing plenty of storage for downloading movies, music, games and other apps. Featuring Android™ 4.0 (Ice Cream Sandwich) and a Qualcomm® Snapdragon™ S4 Processor with 1.5 GHz Dual-Core CPUs and 2GB of RAM, the Galaxy S III also offers a large, 2100mAh battery to power hours of on-the-go entertainment.

· Productivity: For customers who want to use the device in their business and personal lives, T-Mobile’s Galaxy S III offers a suite of security features delivering enterprise-friendly capabilities. From syncing corporate email, calendars and contacts to providing on-device encryption, the Galaxy S III makes it easy to maximize efficiency and productivity for enterprise users. T-Mobile customers also have access to Wi-Fi Calling and the Smartphone Mobile HotSpot feature ensuring easy and reliable connectivity while on the road.

The Samsung Galaxy S III is expected to arrive in a metallic blue or ceramic white color at T-Mobile retail stores and select retailers nationwide, and at www.t-mobile.comstarting June 21.

ASUS' Dual OS Android/Windows Device Is Real, But It's An All-In-One Desktop Called The ...