If you own a Sony SmartWatch, you may want to ignore the impending update to the SmartWatch app on the Play Store right now. Some users are reporting that, after updating the required app, their watches are experiencing random reboots, notifications no longer working, and random disconnects. We've reached out to Sony for comment, but so far we've heard nothing back. 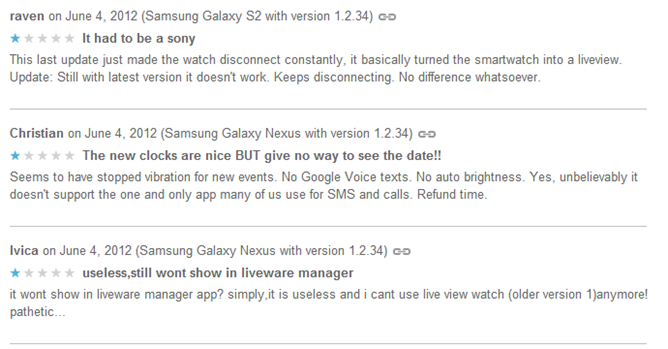 It appears that version 1.2.33 of the software began causing problems. The current app has now been bumped to version 1.2.34, however it's unclear if this update fixes the problem and allows users to upgrade safely. What is clear is that if you already updated to 1.2.33, and your device was then bricked, you won't be able to update to 1.2.34, as the device disconnects right away.

The Play Store is filling up with 1-star reviews and comments claiming that the app has rendered most or all of the watch's functions unusable. While it doesn't appear to be affecting all users, enough users are affected that the savvy won't update until we get a response or a fix from Sony. Meanwhile, if you're experiencing problems, you can head over to the XDA thread on the device here and let others know and hopefully someone will be able to pin down what's going on.