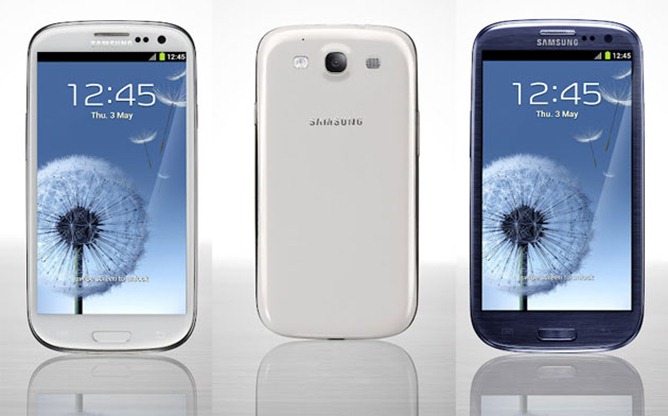 That's right, AT&T is announcing exclusive access to a red Galaxy S III, "for red, white and blue color choices." The red version won't be available immediately. While AT&T isn't specifying when during the summer it will be released, one can only speculate it will arrive around a particular summer date that happens to be more friendly to red, white, and blue colors. Regardless, if the only way Samsung could make the Galaxy S III better in your eyes is to make it red, AT&T is your go-to network.

June 6th is also the date that pre-orders start for Verizon, with the other carriers scattered throughout the month. So get your credit cards ready, America. The One X's archrival is landing on your shores this month, no matter what carrier you're on. And only a month or so after the initial announcement! Oh, how the times have changed.

AT&T Customers Will Be Able To Preorder The Samsung Galaxy S III for $199.99 Starting June 6

DALLAS, June 4, 2012 /PRNewswire/ -- AT&T* customers will be able to get their hands on the highly anticipated Samsung Galaxy S® III in the coming weeks with preorders beginning June 6 in company-owned stores and online atwww.wireless.att.com. Only AT&T's version of the 4G LTE-powered Galaxy S III will be able to take advantage of the nation's largest 4G network.

AT&T customers will also have exclusive access to a red version of the Galaxy S III this summer, for red, white and blue color choices. The smartphone will be available for $199.99** for the 16 GB model after a two-year service agreement, and AT&T stores will also feature a 16 GB MicroSD card at a low price of $39 for a total of 32 GB for under $238.99.

AT&T customers have access to the nation's largest 4G network, covering more than 260 million people. AT&T has two 4G networks that work together for customers, LTE*** and HSPA+ with enhanced backhaul. That means AT&T customers are able to enjoy a widespread, ultra-fast and consistent 4G experience on their compatible device as they move in and out of LTE areas. With other carriers, when you travel outside of their LTE coverage area, you're on a much slower 3G network.

Easy to use and comfortable in the hand, the 4.8-inch HD Super AMOLED™ display is surrounded by an ultra-thin bezel to maximize the viewing area of the Galaxy S III. Weighing only 4.7 ounces and 8.6 millimeters thin, the combination of a powerful 1.5 GHz dual-core processor and unique services in such an attractive package sets the Galaxy S III apart from other smartphones.

The Galaxy S III features advanced options for sharing and adding simplicity to one's life. For sharing, Samsung's AllShare® Play, Group Cast and Share Shot functions help you to share photos with a group of friends or a presentation with co-workers and S-Beam allows easy transfer of large files from one Galaxy S III to another by touching the backs of the two devices. SVoice™ features natural language recognition to allow customers to control applications and services with words instead of touch. The Galaxy S III also includes simple to use camera features like Best Shot to choose the best image from a series when taking a photo.

"The addition of the Samsung Galaxy S III to our portfolio of 4G-LTE devices gives our customers another truly cutting-edge smartphone to choose from," said Jeff Bradley, senior vice president, Devices, AT&T Mobility. "With an exclusive red color this summer and the power of the nation's largest 4G network, AT&T delivers the best wireless experience for Galaxy S III fans."

*AT&T products and services are provided or offered by subsidiaries and affiliates of AT&T Inc. under the AT&T brand and not by AT&T Inc.
**Limited time offer. Discounted pricing requires a new 2-year agreement with a qualifying voice plan and data plan.
***4G speeds not available everywhere. Limited 4G LTE availability in select markets. LTE is a trademark of ETSI. Learn more at att.com/network.

[Update: Another Test, Same Fate] Drop Test Video Shows Exactly Why You Should Never Drop The ...