It is once again time to gather round and take a look at the Android platform distribution chart, Google's periodic pie chart which records the distribution of our friend Andy's various versions.

This time around, there isn't a whole lot to be surprised about – Gingerbread (2.3-2.3.7) handily outweighs all other Android versions, snatching up 65% of the overall pie. Froyo (2.2), which deftly dominated the chart just under a year ago, has shrunk to a comparatively teeny 19.1%.

Meanwhile, Android's latest (and greatest) iteration – Ice Cream Sandwich – is slowly making progress, having clawed its way up to 7.1% of the chart. 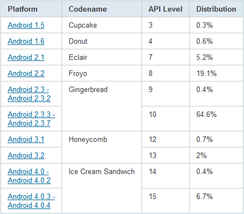 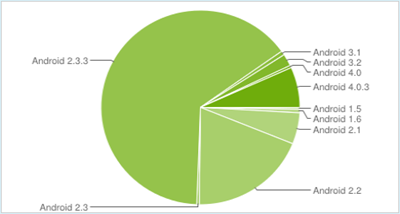 Of course, Ice Cream Sandwich's relatively poky progress isn't necessarily news to many viewers, especially after seeing Ron's work on the Big Android Chart. That being said, progress is being made – last month, ICS was running on 4.9% of all active devices, meaning it was powering about one out of twenty devices. This month, at just over 7%, ICS is running on about 1 out of every 14 devices.

As we barrel toward the summer releases of various new ICS-powered devices (the much anticipated stateside release of Samsung's Galaxy SIII included), and as more carriers and manufacturers promise Ice Cream-flavored updates for existing devices, this number is sure to increase.

Overall, the chart appears to show what one may expect: out with the old and in with the new, even if it's taking a little longer than some users might like.