The Zeemote is a plucky little device that keeps popping up around these parts. Normally $30, the Bluetooth controller pairs with any Android device to give physical controls to games that would otherwise be touchscreen-only. We gave away a thousand of them, and when I reviewed the little guy, I said it would be great, if it were just a bit cheaper. Well, for this weekend, it is. Use coupon code "JS1MDE12" (no quotes), and the company will knock 50% off the controller, bringing it down to a much more palatable $15.

The code works for one or more controllers, so if you want to grab a couple, your coupon code should stack. We were told when we did the review that some games require two controllers, though when I never encountered one that did. And I sure played my fair share of Zeemote-supported games. 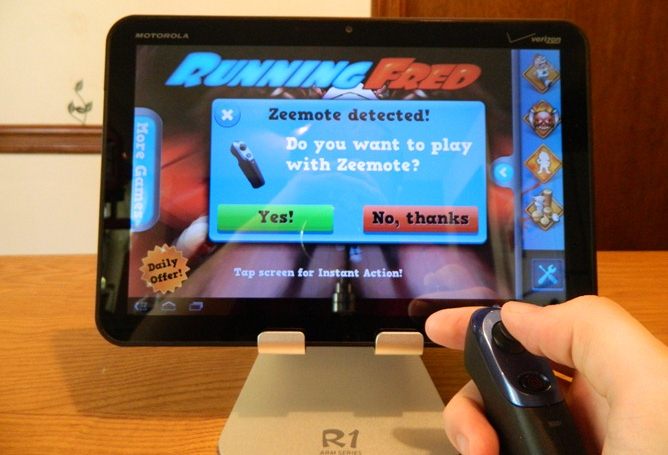 We're still hoping that more developers pick up Zeemote support. Last we checked, the likes of Rovio and Imangi still haven't made a space for third-party controls, but there are still plenty of games out there to make this purchase worthwhile. Which is something that we wouldn't (and didn't) say at the previous price point. So, if you were on the fence, it's time to jump on over.

The promo is live now. Grab the Zeemote here, then enter promo code "JS1MDE12" (again, no quotes) at checkout. So make sure you're not using 1-click purchasing. The promo code will be valid all weekend. Promotion ends Monday the 28th at 11:59PM.

Better Than Magic - Stick Your Phone To A Wall, Treadmill, Or... Ceiling With PU Pads From The ...