Back at CES, NVIDIA CEO Jen-Hsun Huang rocked the house when he briefly showed off a new 7" quad-core tablet that was said to be introing with a price tag of $250. Since then, he publicly stated that $199 Tegra 3 tablets could become a reality sometime this summer. We're now hearing more details of how these budget powerhouses will become a reality: a new platform call Kai.

Little is known about Kai right now, only that it's based on the Tegra 3 chip, but is developed at a much lower cost.

Our strategy on Android is simply to enable quad-core tablets running Android Ice Cream Sandwich to be developed and brought out to market at the $199 price point, and the way we do that is a platform we've developed called Kai. So this uses a lot of the secret sauce that's inside Tegra 3 to allow you to develop a tablet at a much lower cost, by using a lot of innovation that we've developed to reduce the power that's used by the display and use lower cost components within the tablet. 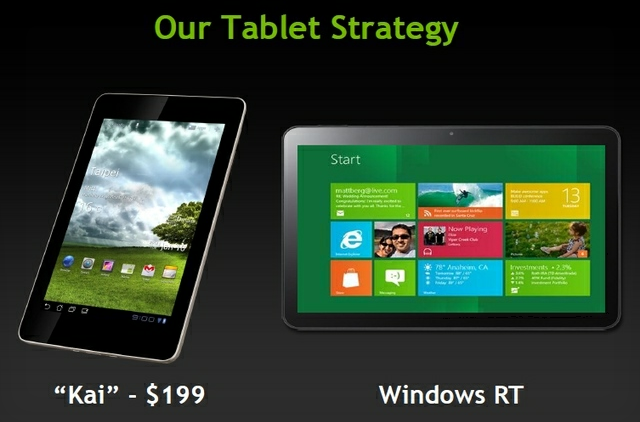 This is clearly something that NVIDIA has been working on for several months, as the image used in the Kai slide is the exact same one to announce the $250 ASUS tablet back at CES (sans branding).

So, when will we see Kai materialize? It's hard to say, but something tells me that we could see these devices start to emerge in the coming months.